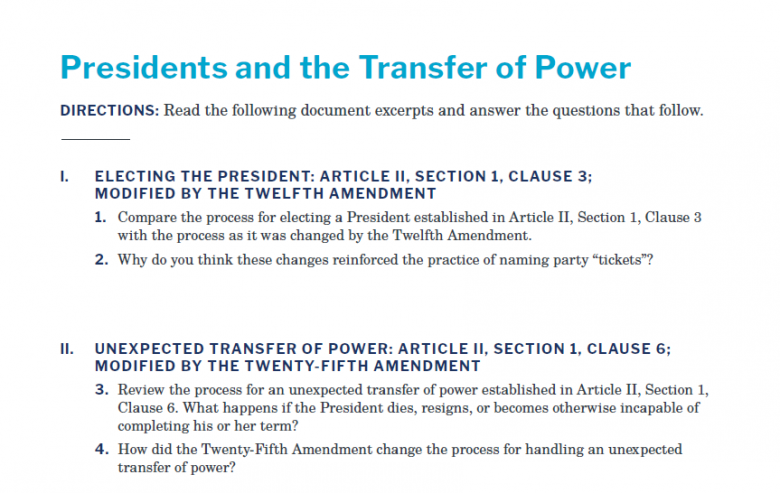 Presidents and the Transfer of Power

Directions: Read the following document excerpts and answer the questions that follow.

I. ELECTING THE PRESIDENT: ARTICLE II, SECTION 1, CLAUSE 3; MODIFIED BY THE TWELFTH AMENDMENT

1. Compare the process for electing a President established in Article II, Section 1, Clause 3 with the process as it was changed by the Twelfth Amendment.

2. Why do you think these changes reinforced the practice of naming party “tickets”?

3. Review the process for an unexpected transfer of power established in Article II, Section 1, Clause 6. What happens if the President dies, resigns, or becomes otherwise incapable of completing his or her term?

4. How did the Twenty-Fifth Amendment change the process for handling an unexpected transfer of power?

1. What limit did the Twenty-Second Amendment place on individuals who want to run for the Presidency?

2. What are arguments in favor of limiting the President to two terms? What are the arguments against? Can you think of any reason that the Founders placed no such limit in the Constitution in 1787?