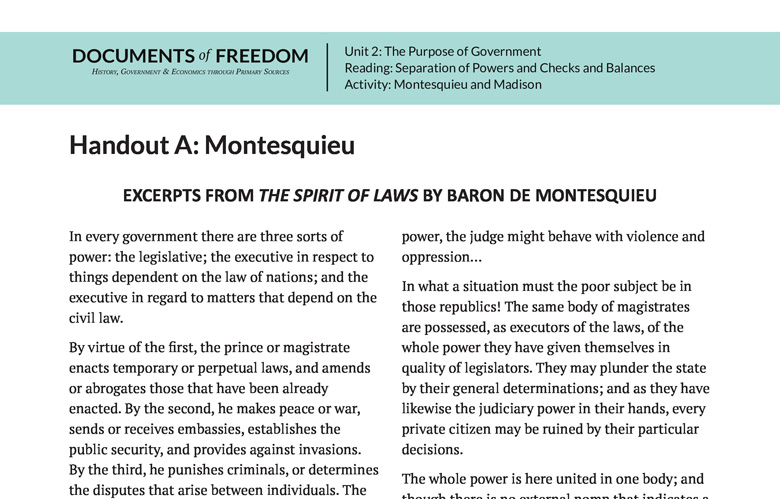 Handout A: Montesquieu – Excerpts from The Spirit of Laws

EXCERPTS FROM THE SPIRIT OF LAWS BY BARON DE MONTESQUIEU

By virtue of the first, the prince or magistrate enacts temporary or perpetual laws, and amends or abrogates those that have been already enacted. By the second, he makes peace or war, sends or receives embassies, establishes the public security, and provides against invasions. By the third, he punishes criminals, or determines the disputes that arise between individuals. The latter we shall call the judiciary power, and the other simply the executive power of the state.

The political liberty of the subject is a tranquillity of mind arising from the opinion each person has of his safety. In order to have this liberty, it is requisite the government be so constituted as one man need not be afraid of another.

When the legislative and executive powers are united in the same person, or in the same body of magistrates, there can be no liberty; because apprehensions may arise, lest the same monarch or senate should enact tyrannical laws, to execute them in a tyrannical manner.

In what a situation must the poor subject be in those republics! The same body of magistrates are possessed, as executors of the laws, of the whole power they have given themselves in quality of legislators. They may plunder the state by their general determinations; and as they have likewise the judiciary power in their hands, every private citizen may be ruined by their particular decisions.

The whole power is here united in one body; and though there is no external pomp that indicates a despotic sway, yet the people feel the effects of it every moment.

The judiciary power ought not to be given to a standing senate; it should be exercised by persons taken from the body of the people at certain times of the year, and consistently with a form and manner prescribed by law, in order to erect a tribunal that should last only so long as necessity requires…

In accusations of a deep and criminal nature, it is proper the person accused should have the privilege of choosing, in some measure, his judges, in concurrence with the law; or at least he should have a right to except against so great a number that the remaining part may be deemed his own choice…

If the legislature leaves the executive power in possession of a right to imprison those subjects who can give security for their good behaviour there is an end of liberty; unless they are taken up, in order to answer without delay to a capital crime, in which case they are really free, being subject only to the power of the law.

But should the legislature think itself in danger by some secret conspiracy against the state, or by a correspondence with a foreign enemy, it might authorise the executive power, for a short and limited time, to imprison suspected persons, who in that case would lose their liberty only for a while, to preserve it for ever…

As in a country of liberty, every man who is supposed a free agent ought to be his own governor; the legislative power should reside in the whole body of the people. But since this is impossible in large states, and in small ones is subject to many inconveniences, it is fit the people should transact by their representatives what they cannot transact by themselves.

The inhabitants of a particular town are much better acquainted with its wants and interests than with those of other places; and are better judges of the capacity of their neighbours than of that of the rest of their countrymen. The members, therefore, of the legislature should not be chosen from the general body of the nation; but it is proper that in every considerable place a representative should be elected by the inhabitants.

The great advantage of representatives is, their capacity of discussing public affairs. For this the people collectively are extremely unfit, which is one of the chief inconveniences of a democracy…

All the inhabitants of the several districts ought to have a right of voting at the election of a representative, except such as are in so mean a situation as to be deemed to have no will of their own…

Neither ought the representative body to be chosen for the executive part of government, for which it is not so fit; but for the enacting of laws, or to see whether the laws in being are duly executed, a thing suited to their abilities, and which none indeed but themselves can properly perform…

In such a state there are always persons distinguished by their birth, riches, or honours: but were they to be confounded with the common people, and to have only the weight of a single vote like the rest, the common liberty would be their slavery, and they would have no interest in supporting it, as most of the popular resolutions would be against them. The share they have, therefore, in the legislature ought to be proportioned to their other advantages in the state; which happens only when they form a body that has a right to check the licentiousness of the people, as the people have a right to oppose any encroachment of theirs.

The legislative power is therefore committed to the body of the nobles, and to that which represents the people, each having their assemblies and deliberations apart, each their separate views and interests.

Of the three powers above mentioned, the judiciary is in some measure next to nothing: there remain, therefore, only two; and as these have need of a regulating power to moderate them, the part of the legislative body composed of the nobility is extremely proper for this purpose…

The executive power ought to be in the hands of a monarch, because this branch of government, having need of despatch, is better administered by one than by many: on the other hand, whatever depends on the legislative power is oftentimes better regulated by many than by a single person.

But if there were no monarch, and the executive power should be committed to a certain number of persons selected from the legislative body, there would be an end then of liberty; by reason the two powers would be united, as the same persons would sometimes possess, and would be always able to possess, a share in both.

Were the legislative body to be a considerable time without meeting, this would likewise put an end to liberty. For of two things one would naturally follow: either that there would be no longer any legislative resolutions, and then the state would fall into anarchy; or that these resolutions would be taken by the executive power, which would render it absolute.

It would be needless for the legislative body to continue always assembled. This would be troublesome to the representatives, and, moreover, would cut out too much work for the executive power, so as to take off its attention to its office, and oblige it to think only of defending its own prerogatives, and the right it has to execute.

Again, were the legislative body to be always assembled, it might happen to be kept up only by filling the places of the deceased members with new representatives; and in that case, if the legislative body were once corrupted, the evil would be past all remedy. When different legislative bodies succeed one another, the people who have a bad opinion of that which is actually sitting may reasonably entertain some hopes of the next: but were it to be always the same body, the people upon seeing it once corrupted would no longer expect any good from its laws; and of course they would either become desperate or fall into a state of indolence.

The legislative body should not meet of itself. For a body is supposed to have no will but when it is met; and besides, were it not to meet unanimously, it would be impossible to determine which was really the legislative body; the part assembled, or the other. And if it had a right to prorogue itself, it might happen never to be prorogued; which would be extremely dangerous, in case it should ever attempt to encroach on the executive power. Besides, there are seasons, some more proper than others, for assembling the legislative body: it is fit, therefore, that the executive power should regulate the time of meeting, as well as the duration of those assemblies, according to the circumstances and exigencies of a state known to itself.

Were the executive power not to have a right of restraining the encroachments of the legislative body, the latter would become despotic; for as it might arrogate to itself what authority it pleased, it would soon destroy all the other powers.

But it is not proper, on the other hand, that the legislative power should have a right to stay the executive. For as the execution has its natural limits, it is useless to confine it; besides, the executive power is generally employed in momentary operations. The power, therefore, of the Roman tribunes was faulty, as it put a stop not only to the legislation, but likewise to the executive part of government; which was attended with infinite mischief.

But if the legislative power in a free state has no right to stay the executive, it has a right and ought to have the means of examining in what manner its laws have been executed…

But whatever may be the issue of that examination, the legislative body ought not to have a power of arraigning the person, nor, of course, the conduct, of him who is entrusted with the executive power. His person should be sacred, because as it is necessary for the good of the state to prevent the legislative body from rendering themselves arbitrary, the moment he is accused or tried there is an end of liberty.

In this case the state would be no longer a monarchy, but a kind of republic, though not a free government. But as the person entrusted with the executive power cannot abuse it without bad counsellors, and such as have the laws as ministers, though the laws protect them as subjects, these men may be examined and punished…

The executive power, pursuant of what has been already said, ought to have a share in the legislature by the power of rejecting, otherwise it would soon be stripped of its prerogative. But should the legislative power usurp a share of the executive, the latter would be equally undone.

The change of government at Rome was owing to this, that neither the senate, who had one part of the executive power, nor the magistrates, who were entrusted with the other, had the right of rejecting, which was entirely lodged in the people.

Here then is the fundamental constitution of the government we are treating of. The legislative body being composed of two parts, they check one another by the mutual privilege of rejecting. They are both restrained by the executive power, as the executive is by the legislative.

These three powers should naturally form a state of repose or inaction. But as there is a necessity for movement in the course of human affairs, they are forced to move, but still in concert.

As the executive power has no other part in the legislative than the privilege of rejecting, it can have no share in the public debates. It is not even necessary that it should propose, because as it may always disapprove of the resolutions that shall be taken, it may likewise reject the decisions on those proposals which were made against its will…

Were the executive power to determine the raising of public money, otherwise than by giving its consent, liberty would be at an end; because it would become legislative in the most important point of legislation.