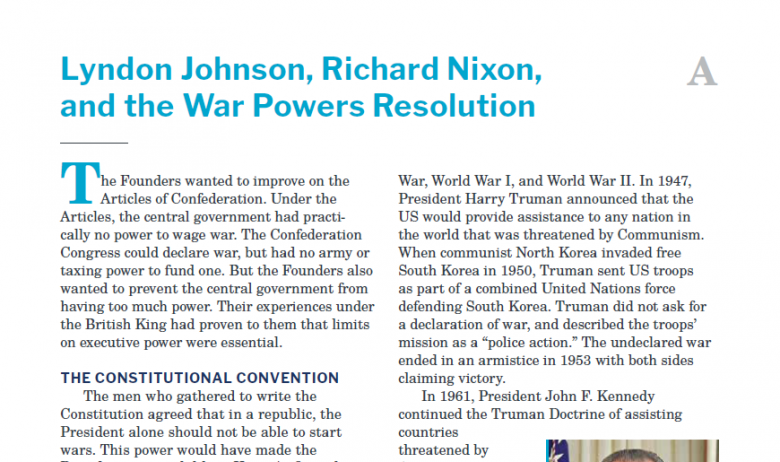 The Founders wanted to improve on the Articles of Confederation. Under the Articles, the central government had practically no power to wage war. The Confederation Congress could declare war, but had no army or taxing power to fund one. But the Founders also wanted to prevent the central government from having too much power. Their experiences under the British King had proven to them that limits on executive power were essential.

The men who gathered to write the Constitution agreed that in a republic, the President alone should not be able to start wars. This power would have made the President too much like a King. At first, they gave the power to “make war” to Congress. But after some discussion, they agreed that the legislature was too large and too slow to do this effectively. They changed “make war” to “declare war.” This ensured that the President could not declare war on his own (but left him with the power, as Commander in Chief, to repel attacks without waiting for approval from Congress). In addition to having the power to declare war, Congress was also given the power to approve the military budget.

On the other hand, the President would be Commander in Chief of the military forces. This means that once war is declared, the President is in charge of it. All military officials are ultimately accountable to the President. The delegates at the Constitutional Convention made this decision because an individual is more suited to swift action and decision making than a large body like Congress.

Congress declared war in the War of 1812, the Mexican-American War, Spanish-American War, World War I, and World War II. In 1947, President Harry Truman announced that the US would provide assistance to any nation in the world that was threatened by Communism. When communist North Korea invaded free South Korea in 1950, Truman sent US troops as part of a combined United Nations force defending South Korea. Truman did not ask for a declaration of war, and described the troops’ mission as a “police action.” The undeclared war ended in an armistice in 1953 with both sides claiming victory.

In 1961, President John F. Kennedy continued the Truman Doctrine of assisting countries threatened by Communism by sending supplies and military advisors to South Vietnam in their fight against Communist North Vietnam. US troops were in combat less than a year later, though there had been no declaration of war from Congress.

President Kennedy was assassinated in 1963 and President Lyndon Johnson took over the management of the war in Vietnam. Congress passed the Gulf of Tonkin Resolution, affirming that the US was “prepared, as the President determines, to take all necessary steps, including the use of armed force” to assist South Vietnam. Though there was no declaration of war, Johnson understood the Gulf on Tonkin Resolution as empowering him to escalate the fighting.

The war became increasingly unpopular at home. Critics argued there was no clear objective, the US did not seem to be winning, and casualties were mounting. Under a barrage of criticism, President Johnson announced he would not run for a second term.

After President Richard Nixon was inaugurated in 1969, he began secret bombings in Cambodia. These missions were kept secret from Congress and the American people for more than a year. News of the My Lai massacre (where US troops killed unarmed civilians and children) broke in 1969. Distrust of government intensified when the Pentagon Papers (stolen secret documents revealing the government had misled the people about the Vietnam War) were published in 1971.

By 1973, all American troops had left Vietnam, and the Senate Armed Service Committee had begun hearings on the secret bombings in Cambodia. Congress ordered an immediate end to the bombing raids.

At this same time, Congress also drew up the War Powers Resolution. The Resolution required the President to consult Congress before the start of hostilities, and report regularly on the deployment of US troops. Further, the President would have to withdraw forces within sixty days if Congress has not declared war or authorized the use of force. When it came to his desk, Nixon vetoed the War Powers Resolution. In his veto message, he wrote that the Resolution “would attempt to take away, by a mere legislative act, authorities which the President has properly exercised under the Constitution for almost 200 years. … The only way in which the constitutional powers of a branch of the Government can be altered is by amending the Constitution…” He noted that Congress already had a constitutional check on the President’s power with its appropriations (funding) power.

Congress passed the law over President Nixon’s veto with the necessary two-thirds vote in both Houses.

Though Presidents have provided Congress with reports consistent with the War Powers Resolution since its passage, one former US Senator noted in 2008 that no President had ever submitted the precise kinds of reports to Congress required by the Act despite the US’s involvement in numerous armed conflicts since 1973. A bipartisan panel recommended the repeal of the War Powers Resolution in 2008, but debate over what kind of law should replace it, if any, continues.