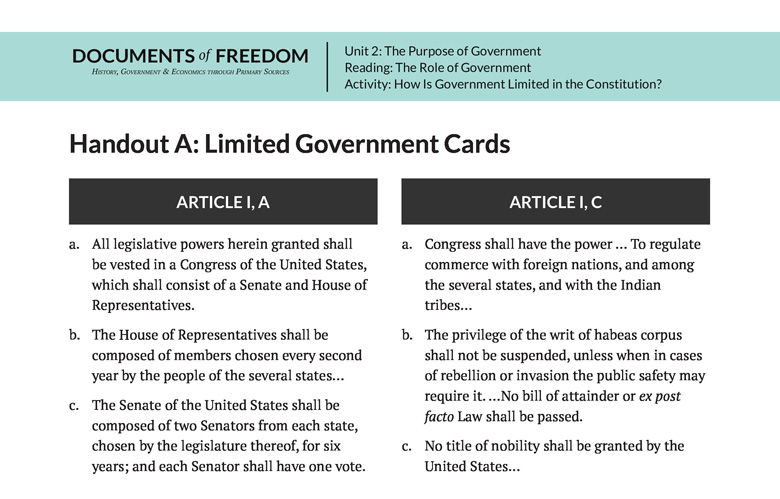 ARTICLE I, A
a. All legislative powers herein granted shall be vested in a Congress of the United States, which shall consist of a Senate and House of Representatives.
b. The House of Representatives shall be composed of members chosen every second year by the people of the several states…
c. The Senate of the United States shall be composed of two Senators from each state, chosen by the legislature thereof, for six years; and each Senator shall have one vote.

a. Congress shall have the power … To regulate commerce with foreign nations, and among the several states, and with the Indian tribes…
b. The privilege of the writ of habeas corpus shall not be suspended, unless when in cases of rebellion or invasion the public safety may require it. …No bill of attainder or ex post facto Law shall be passed.
c. No title of nobility shall be granted by the United States…

ARTICLE III
a. The judicial power of the United States, shall be vested in one Supreme Court, and in such inferior courts as the Congress may from time to time ordain and establish.
b. The judicial power shall extend to all cases, in law and equity, arising under this Constitution … to controversies between two or more states.
c. The trial of all crimes, except in cases of impeachment, shall be by jury.

ARTICLE IV AND V
a. The citizens of each state shall be entitled to all privileges and immunities of citizens in the several states.
b. The United States shall guarantee to every state in this union a republican form of government…
c. The Congress, whenever two thirds of both houses shall deem it necessary, shall propose amendments to this Constitution … or, on the application of the legislatures of two thirds of the several states, shall call a convention for proposing amendments…

ARTICLE VI AND VII
a. This Constitution … shall be the supreme law of the land; and the judges in every state shall be bound thereby, anything in the Constitution or laws of any State to the contrary notwithstanding.
b. …no religious test shall ever be required as a qualification to any office or public trust under the United States.
c. The ratification of the conventions of nine states, shall be sufficient for the establishment of this Constitution between the states so ratifying the same.