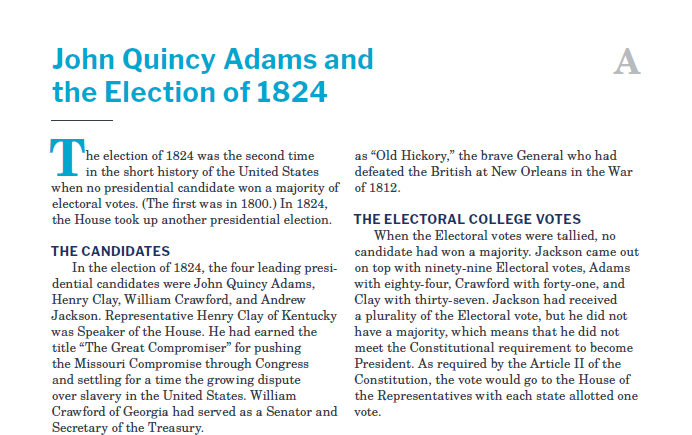 The election of 1824 was the second time in the short history of the United States when no presidential candidate won a majority of electoral votes. (The first was in 1800.) In 1824, the House took up another presidential election.

In the election of 1824, the four leading presidential candidates were John Quincy Adams, Henry Clay, William Crawford, and Andrew Jackson. Representative Henry Clay of Kentucky was Speaker of the House. He had earned the title “The Great Compromiser” for pushing the Missouri Compromise through Congress and settling for a time the growing dispute over slavery in the United States. William Crawford of Georgia had served as a Senator and Secretary of the Treasury.

John Quincy Adams was the son of the second President, John Adams. Adams had been groomed for public service throughout his entire life. Before he turned seventeen, he had served in several posts overseas. Later, Adams graduated from Harvard and ran a successful law practice. He served as Minister to Russia under James Madison and Secretary of State in the Monroe Administration. Political tradition meant that John Quincy Adams was seen as the heir to the Presidency, since most US Presidents up to that time had served as Secretary of State before they were President.

Andrew Jackson was a hero from the War of 1812 and a US Senator. Jackson’s background was very different from that of Adams. Unlike the privileged Adams, Jackson was born in the Carolina backwoods and had little formal schooling. Too young to enlist, he served in the Revolutionary War as an “irregular.” In his late teens he became a lawyer and opened a thriving practice in Tennessee. By 1824, he was known as “Old Hickory,” the brave General who had defeated the British at New Orleans in the War of 1812.

When the Electoral votes were tallied, no candidate had won a majority. Jackson came out on top with ninety-nine Electoral votes, Adams with eighty-four, Crawford with forty-one, and Clay with thirty-seven. Jackson had received a plurality of the Electoral vote, but he did not have a majority, which means that he did not meet the Constitutional requirement to become President. As required by the Article II of the Constitution, the vote would go to the House of the Representatives with each state allotted one vote.

Clay was eliminated from the contest because the Twelfth Amendment allows only the top three candidates to be voted on —he was fourth. Clay used his influential position as Speaker of the House to make it known that he would be supporting Adams because he did not think that Jackson’s military history qualified him to be President. Clay said, “I cannot believe that killing 2,500 Englishmen at New Orleans qualifies for the various, difficult, and complicated duties of the Chief Magistracy.” Clay called in favors and worked behind the scenes to secure votes for Adams—even the votes of his home state of Kentucky, where Adams had not even appeared on the ballot.

On February 9, 1825, the House voted. Jackson expected he would win the election. He had won not only the most electoral votes, but also a plurality of the popular vote (as could be collected at the time). But the House elected John Quincy Adams to be President. Jackson was both stunned and outraged.

Several days later Adams nominated Clay to be his Secretary of State. In essence, Adams appointed Clay to the office that was seen as the stepping stone to the Presidency. Jackson was so furious at what he perceived to be “the corrupt bargain”—that Clay would support Adams’ election in the House if Adams would appoint Clay Secretary of State after he became President—that he resigned his seat in the Senate. Jackson claimed that the people’s voice had been distorted because the popular vote had been ignored. He started campaigning around the country on the perceived injustice of what had happened.

Jackson’s four year campaign was a success— he was elected President in his rematch with Adams in the election of 1828. In his first Message to Congress, he recommended abolishing the Electoral College.