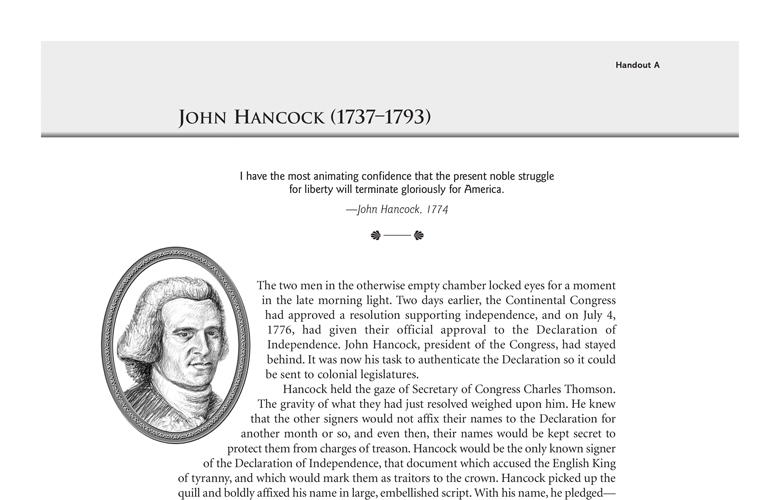 I have the most animating confidence that the present noble struggle for liberty will terminate gloriously for America. – John Hancock (1774)

The two men in the otherwise empty chamber locked eyes for a moment in the late morning light. Two days earlier, the Continental Congress had approved a resolution supporting independence, and on July 4, 1776, had given their official approval to the Declaration of Independence. John Hancock, president of the Congress, had stayed behind. It was now his task to authenticate the Declaration so it could be sent to colonial legislatures.

Hancock held the gaze of Secretary of Congress Charles Thomson. The gravity of what they had just resolved weighed upon him. He knew that the other signers would not affix their names to the Declaration for another month or so, and even then, their names would be kept secret to protect them from charges of treason. Hancock would be the only known signer of the Declaration of Independence, that document which accused the English King of tyranny, and which would mark them as traitors to the crown. Hancock picked up the quill and boldly affixed his name in large, embellished script. With his name, he pledged— as the Declaration proudly affirmed—his life, his fortune, and his sacred honor to his fellow Patriots in the cause of American independence.

John Hancock was born on January 23, 1737, in Braintree, Massachusetts. His father was a clergyman who died when Hancock was a boy. Hancock was then raised by his uncle, a wealthy Boston merchant, who sent him to Harvard College. At age seventeen, after an undistinguished academic career, Hancock graduated and became a clerk in his uncle’s shipping firm.

In 1764, Hancock’s uncle died, leaving his business and substantial fortune— perhaps the largest in all of New England—to the twenty-seven-year-old Hancock. He instantly became an influential figure at a time when tensions between America and Great Britain were beginning to increase. In 1765, the British Parliament passed the Stamp Act, which sparked violent protests in Boston. The following year, Hancock was elected to the Massachusetts legislature.

The Sons of Liberty

It was at this time that Samuel Adams befriended Hancock. A fellow Bostonian, Adams was already known for his opposition to the British attempt to tax the American colonies. He convinced the wealthy Hancock to assist him in organizing the Sons of Liberty, a group of Americans who took action to resist British tyranny. Hancock’s money largely funded the Patriot movement in Boston.

Adams and Hancock were in many ways an odd couple. A member of the elite class and a man of commerce, Hancock did not hesitate to conduct business with English merchants. He was always well groomed and attired in the finest clothes money could buy. Adams, on the other hand, was a failed businessman who cared little for fame or for his personal appearance. A committed Puritan, he disliked displays of wealth and chided those who purchased “baubles” produced by English manufacturers. But the friendship between the pair became one of the most important personal relationships of the Revolutionary era.

In 1768, British customs officials seized one of Hancock’s merchant vessels, the Liberty. They claimed that the ship’s captain had failed to pay import duties. The captain was following Hancock’s orders to challenge the legality of the British tax. The incident sparked violence when the Sons of Liberty organized a mob to protest the Liberty’s seizure.

The Liberty incident made Hancock a hero among American Patriots and a nuisance to British authorities. In the same year, he and Adams helped to generate protests against the newly enacted Townshend Duties. The British government sent several regiments of troops to Boston to try to squelch the increasing rabble-rousing of the Sons of Liberty.

On the evening of March 5, 1770, a crowd of Bostonians gathered around a group of British soldiers and began to taunt them and throw snowballs. The soldiers fired on the citizens, killing five men. The event galvanized opposition among Bostonians to the British presence. Hancock and Adams convened a meeting of outraged citizens the next day. Hancock was chosen to head a committee to demand that Lieutenant-Governor Thomas Hutchinson remove the troops from the city.

The troops were not withdrawn, and the Sons of Liberty continued to organize opposition to British rule. In 1773, Parliament passed the Tea Act, which lowered the price of British tea, thereby undercutting American merchants and smugglers. In response, Hancock and Adams organized the Boston Tea Party. This was a nighttime raid in which some 150 members of the Sons of Liberty, disguised as Native Americans, boarded a docked merchant ship and threw 342 chests of British tea into Boston harbor.

By 1774 Hancock and Adams had been singled out by British authorities as the main troublemakers in Boston. In a last-ditch attempt to quell the uprising, the new royal governor of Massachusetts, General Thomas Gage, issued an amnesty to all who had been involved in illegal opposition to British law. However, he named Hancock and Adams as the only residents who could not obtain pardon. In April 1775, Massachusetts militiamen fired on British troops sent by Gage to arrest Hancock and Adams. The American War of Revolution had begun. Hancock was angry when Congress in 1775 passed him over for command of the Continental Army and chose George Washington instead.

That year, Hancock was chosen to attend the meeting of the Continental Congress in Philadelphia. He was chosen president of the Congress and presided over the signing of the Declaration of Independence on August 2, 1776. He himself had signed it a month earlier on July 4, 1776. In 1780, Hancock resigned from Congress and returned home to Massachusetts.

Hancock served as governor of Massachusetts for nine terms between 1780 and 1793. He served on the committee that created the state constitution of 1780. As governor in 1787, he pardoned most of the participants in Shays’s Rebellion, including Daniel Shays himself.

That same year, delegates from twelve of the states assembled in Philadelphia to revise the Articles of Confederation. Hancock had signed the Articles when he served in the Continental Congress. Fearful of centralized government power, he was at first critical of the Constitution. But Hancock eventually agreed to support ratification. He presided over the Massachusetts ratifying convention in 1788. Five years later, Hancock died in his hometown of Quincy, his name to be remembered by later generations of Americans for more than two centuries because he wrote it so boldly in 1776.