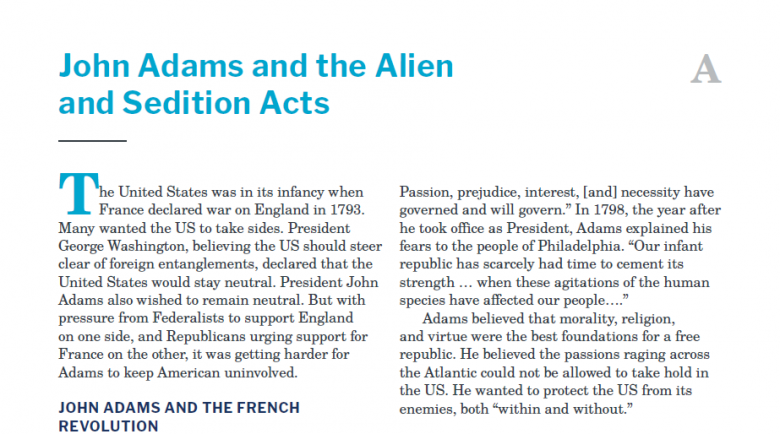 John Adams and the Alien and Sedition Acts

The United States was in its infancy when France declared war on England in 1793. Many wanted the US to take sides. President George Washington, believing the US should steer clear of foreign entanglements, declared that the United States would stay neutral. President John Adams also wished to remain neutral. But with pressure from Federalists to support England on one side, and Republicans urging support for France on the other, it was getting harder for Adams to keep American uninvolved.

John Adams and the French Revolution

Adams wished to avoid war and to protect the young nation from the revolutionary fervor in France, which Adams believed was contrary to American constitutional principles.

Some believed the new nation should be a natural ally of the French. After all, the French seemed to be fighting to free themselves from an oppressive monarch, just like the American colonists had done. But two revolutions were very different.

The American War for Independence was intended to restore traditional rights. The French Revolutionaries wanted to do away with tradition. They established a new calendar: weeks would now be ten days long, and days would have ten hours, not twenty four. Religious references were outlawed, and a “goddess of reason” (played by an actress) was celebrated at Notre Dame Cathedral in Paris. Revolutionary leaders, claiming to be working for the “salvation of the people” sent thousands of “enemies of the revolution” to the guillotine during the Reign of Terror from 1793-1794.

Adams wanted to prevent radicalism like this from arising in America. He wrote to a friend that in France, “Reasoning has all been lost. Passion, prejudice, interest, [and] necessity have governed and will govern.” In 1798, the year after he took office as President, Adams explained his fears to the people of Philadelphia. “Our infant republic has scarcely had time to cement its strength … when these agitations of the human species have affected our people….”

Adams believed that morality, religion, and virtue were the best foundations for a free republic. He believed the passions raging across the Atlantic could not be allowed to take hold in the US. He wanted to protect the US from its enemies, both “within and without.”

The Alien and Sedition Acts

France was at war with every major European power. Though Adams wished to avoid war, it seemed unavoidable. The US became involved in what has been called a “Quasi-War” with France. France suspended commerce with the US, and seized hundreds of American ships, because America was trading with England. Congress appropriated money to increase the navy, and authorized raising a provisional army.

In 1797, Adams sent diplomats to France to try to negotiate peace. France refused to receive the diplomats unless they paid a bribe. The American diplomats left. The XYZ Affair, (as it came to be known because the French diplomats were unnamed) further increased anti-French sentiment in the US and the Federalists’ desire for war.

In June of 1798, the Federalist- controlled Congress took up several bills said to be for national security. These bills required immigrants to wait fourteen years (up from five) to become citizens and vote. They gave the President more power to deport immigrants. And they made it a crime to publish any “false, scandalous and malicious writing” against the President or Congress, intended to “excite against them … the hatred of the good people of the United States.” The laws would all expire in March, 1801.

John Adams did not ask for these laws; he did not oppose them either. He signed the Alien and Sedition Acts (as they are collectively known) into law on July 14, 1798—the anniversary of the storming of the Bastille in Paris. Adams wished to convey his disapproval of the French Revolution by signing the bills into law on that date.

Although the laws were national security measures designed to quiet support for the French, they were also designed to silence Adams’s political opposition. Immigrants tended to vote Republican. And the only publishers charged under the Alien and Sedition Acts were Republicans.

The laws were condemned in some states as violating the First Amendment. The First Amendment (1791) maintains, “Congress shall make no law … abridging the freedom of speech, or of the press.” James Madison, author of the Bill of Rights, wrote one of the most famous critiques, the Virginia Resolution (1798). Madison wrote that the laws “ought to produce universal alarm, [for attacking] that right of freely examining public characters and measures, and of free communication among the people thereon, which has ever been justly deemed, the only effectual guardian of every other right.”

Other states disagreed. For example, New Hampshire called the law “constitutional, and, in the present critical situation of our country, highly expedient.” Ten of fourteen states condemned the idea that states were the proper judges of the constitutionality of laws.

Congress issued the “Congressional Report Defending the Alien and Sedition Laws” in February of 1799. This report defended the sedition portions of the Alien and Sedition Acts as a constitutional regulation of speech and press. Since there was no right to libel, Congress said, it could not be a violation of rights to punish libel. Further, liberty of the press meant no prior restraints (bans on publication beforehand), and the law was not a prior restraint. Finally, the laws were “precautionary and protective measures for our security … So eccentric are the movements of the French government that we can form no opinion of their future designs (intentions) for our country.”

The Supreme Court was never asked to rule on the constitutionality of the Alien and Sedition Acts. Though the election of 1800 was close, Adams’s loss was probably due in part to public reaction to the laws.

The laws expired on Adams’s last day in office in 1801. Thomas Jefferson, the leader of the Republican Party, became the nation’s third president.