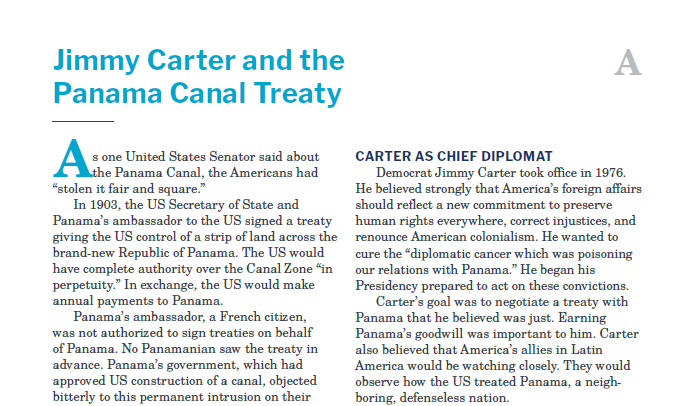 As one United States Senator said about the Panama Canal, the Americans had “stolen it fair and square.”

In 1903, the US Secretary of State and Panama’s ambassador to the US signed a treaty giving the US control of a strip of land across the brand-new Republic of Panama. The US would have complete authority over the Canal Zone “in perpetuity.” In exchange, the US would make annual payments to Panama.

Panama’s ambassador, a French citizen, was not authorized to sign treaties on behalf of Panama. No Panamanian saw the treaty in advance. Panama’s government, which had approved US construction of a canal, objected bitterly to this permanent intrusion on their sovereignty.

In the largest engineering feat of our history up to that point, Americans directed construction of the Panama Canal from 1904-1914.

The US and Panama Relationship

The Canal Zone was a US territory, and as such had its own post offices, courts, and schools. The flags of each nation—where and how they were flown—became a symbol for the disagreement over who owned the Zone.

By the 1960s, tensions between the Americans and Panamanians were high. Zone authorities decreed neither flag would be flown in Canal Zone schools. On January 9, 1964, a conflict over the flags of each nation erupted into riots. American-owned businesses were attacked. When the riots were over, twenty-one Panamanians and four US soldiers had been killed. The next day, Panama broke off diplomatic relations with the US until a new treaty could be worked on.

Because of political turmoil in both countries, negotiations for a new treaty did not begin until 1976.

Democrat Jimmy Carter took office in 1976. He believed strongly that America’s foreign affairs should reflect a new commitment to preserve human rights everywhere, correct injustices, and renounce American colonialism. He wanted to cure the “diplomatic cancer which was poisoning our relations with Panama.” He began his Presidency prepared to act on these convictions.

Carter’s goal was to negotiate a treaty with Panama that he believed was just. Earning Panama’s goodwill was important to him. Carter also believed that America’s allies in Latin America would be watching closely. They would observe how the US treated Panama, a neighboring, defenseless nation.

Carter faced opposition from Congress and the public. Public opinion was that the US should keep the canal that had been planned, built, and paid for by America. Despite this opposition, the President believed that his best chance for a fair treaty was to address the issue quickly. On September 7, 1977, Carter and Panamanian leader Omar Torrijos signed two treaties, known as the Torrijos-Carter Treaties.

The first, the Panama Canal Treaty, stated that the Canal Zone would be turned over to Panama in 1979. A gradual transfer of the operation of the canal itself would be complete by December 31, 1999. The second Treaty, commonly known as the Neutrality Treaty, gave the United States the right to defend the canal forever, but affirmed Panama’s control of its internal affairs. Panamanian voters approved the Carter-Torrijos treaties in a special vote.

In the US, however, it was more complicated. Carter had to address the doubts of the American people, as well as opposition in the US Senate. Many treaty opponents saw control of the canal as a symbol of American strength. The issue was “patriotism vs. surrender.” There were also concerns about Panama’s ability to run the canal, given its unstable government. Torrijos was a military dictator. Finally, the economic and strategic impact that giving up the Canal would have on the US was unknown.

Treaty supporters argued that control of the Canal was less crucial to America’s foreign policy interests than in the past. Further, the US could not effectively defend the canal without the cooperation of the Panamanians. Treaty supporters also argued that Panama had the best possible motivation to operate the canal effectively. A State Department official said, “It is their only natural resource, and they will take care of it.”

Carter engaged in a massive public relations campaign to inform the American people about the Treaties’ benefits. He sent representatives across the country to make more than 1500 appearances.

Thirty-eight Senators—more than enough to prevent US ratification —expressed opposition to the Treaties. To win converts in the Senate, Carter’s team kept a binder with notes of conversations, rumors, and questions from Senators regarding the treaty. They quickly followed up on each entry to persuade as many Senators as they could. Carter also encouraged Senators to visit Panama and talk with Torrijos.

Throughout the Senate debate, which was the longest since defeat of the Treaty of Versailles, Carter personally tracked the Senate’s progress. He spoke daily with Senators and with Torrijos, answering questions and agreeing to various Senate modifications to save the treaties.

The Neutrality Treaty was approved on March 16, and the Panama Canal Treaty on April 18, 1978 with one vote to spare: sixty-eight for, thirty-two against. Through personal attention, patience, and his willingness to make adjustments in the agreement, Carter had built support for it.

In 1999, the gradual shift of authority for the canal was complete, and former President Carter led the US delegation in the ceremony marking the handoff. President Jimmy Carter considers the Panama Treaties among the most important achievements of his presidency.