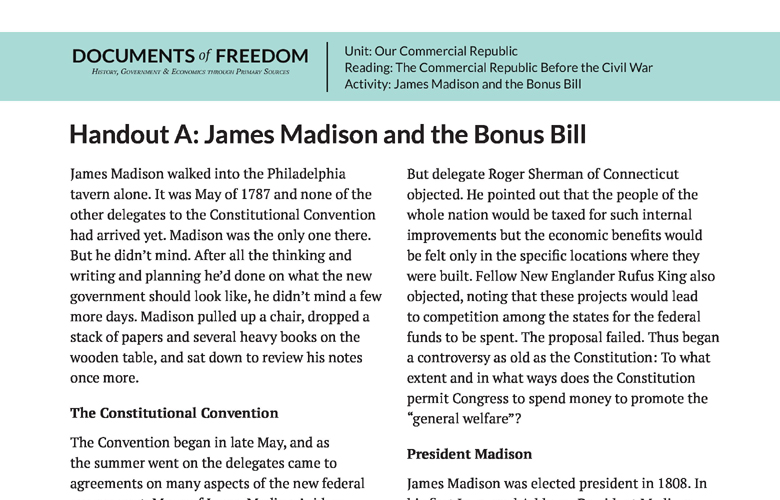 Handout A: James Madison and the Bonus Bill

James Madison walked into the Philadelphia tavern alone. It was May of 1787 and none of the other delegates to the Constitutional Convention had arrived yet. Madison was the only one there. But he didn’t mind. After all the thinking and writing and planning he’d done on what the new government should look like, he didn’t mind a few more days. Madison pulled up a chair, dropped a stack of papers and several heavy books on the wooden table, and sat down to review his notes once more.

The Convention began in late May, and as the summer went on the delegates came to agreements on many aspects of the new federal government. Many of James Madison’s ideas formed the backbone of the new constitution: a plan for a republic that was “partly national, and partly federal,” as Madison would later describe it. The new national government was to have “national powers,” which had “national ends” or purposes for the entire nation. The states retained important powers to address tasks that did not require national direction or management. On September 14, as the Convention drew to a close, James Madison, along with delegates Benjamin Franklin and James Wilson, proposed that Congress be given the explicit power to grant charters of incorporation for the construction of canals. They believed this would allow the federal government to promote transportation and commerce among the states. Madison explained that, since the new constitution would remove the political obstacles among the states, “a removal of the natural ones as far as possible ought to follow.”

But delegate Roger Sherman of Connecticut objected. He pointed out that the people of the whole nation would be taxed for such internal improvements but the economic benefits would be felt only in the specific locations where they were built. Fellow New Englander Rufus King also objected, noting that these projects would lead to competition among the states for the federal funds to be spent. The proposal failed. Thus began a controversy as old as the Constitution: To what extent and in what ways does the Constitution permit Congress to spend money to promote the “general welfare”?

James Madison was elected president in 1808. In his first Inaugural Address, President Madison pledged “to support the Constitution, which is the cement of the Union, as well in its limitations as in its authorities; to respect the rights and authorities reserved to the States and to the people.”

By 1815, President Madison presided over a country of eight million people. The nation spread over the territory from the Atlantic seacoast past the Appalachians, from Maine to Georgia, and spilling into the area along the Mississippi River. Commerce, transportation, and communication across this vast territory were difficult and, for some areas, practically nonexistent. It was clear that without significant improvements in the nation’s infrastructure, the commercial and agricultural development of the new nation would be crippled. But who would provide this new development: the federal government, or the states?

President Madison agreed with Thomas Jefferson that, while such improvements were desirable, even essential, it would be necessary to amend the Constitution in order to give Congress the authority to embark on such projects. When Madison was able to turn his attention to domestic policy after the end of the War of 1812, he urged that Congress propose a Constitutional amendment that would authorize the federal government to begin building national roads and canals.

Congress did not address the constitutional issue. Instead, the Congress drafted a bill that would apply money raised from the newly reauthorized National Bank toward the building of roads and canals. In his last official act as President, Madison vetoed the “Bonus Bill” as it was called. In his veto message, Madison noted that neither the power to regulate commerce, nor to provide for the common defense, nor to promote the general welfare could be understood to grant Congress the power to construct roads and canals. He wrote that “the legislative powers vested in Congress are specified and enumerated in the eighth section of the first article of the Constitution, and it does not appear that the power proposed to be exercised by the bill is among the enumerated powers, or that it falls by any just interpretation with the power to make laws necessary and proper for carrying into execution those or other powers vested by the Constitution in the Government of the United States.”

In Madison’s view, the fact that an important policy was a great idea and would lead to significant improvements did not make it constitutional: “I am not unaware of the great importance of roads and canals and the improved navigation of water courses… But seeing that such a power is not expressly given by the Constitution, and believing that it cannot be deduced from any part of it…I have no option but to withhold my signature from it.”

Finally, Madison believed that interpreting the powers of the federal government too loosely would lead the federal government to become too powerful. He wrote, “the permanent success of the Constitution depends on a definite partition of powers between the general and the state governments, and that no adequate landmarks would be left by the constructive extension of the powers of Congress as proposed in the bill.” If the limits of the Constitution were not respected, the national government would overpower the state governments.

Because of his conviction that the powers of the federal government must be limited to those enumerated by the Constitution, President Madison used the veto power to prevent the Congress from carrying out a goal that he himself had advocated thirty years earlier.