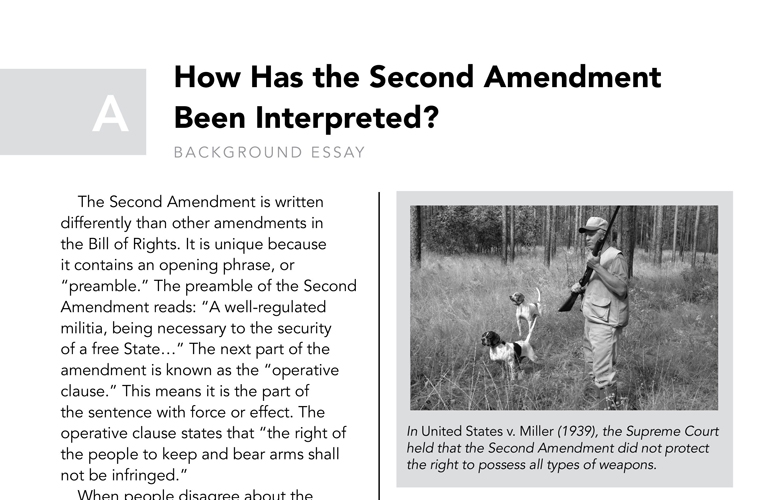 The Second Amendment is written differently than other amendments in the Bill of Rights. It is unique because it contains an opening phrase, or “preamble.” The preamble of the Second Amendment reads: “A well-regulated militia, being necessary to the security of a free State…” The next part of the amendment is known as the “operative clause.” This means it is the part of the sentence with force or effect. The operative clause states that “the right of the people to keep and bear arms shall not be infringed.”

How Has the Supreme Court
Ruled?

In Presser v. Illinois (1886), the Court held that states could not disarm citizens because that would reduce with the federal government’s ability to raise a militia. But the Court added, “We think it clear that [laws] which…forbid bodies of men to associate together as military organizations, or to drill or parade with arms in cities and towns unless authorized by law, do not infringe the right of the people to keep and bear arms.” The Court also interpreted the word “militia.” They stated that a militia was “all citizens capable of bearing arms.”

In United States v. Miller (1939), the Supreme Court held that the Second Amendment did not protect the right to possess all types of weapons. The Court upheld a federal law that regulated sawed-off shotguns [one type of gun that is easily concealed and often used by criminals].

Why Is District of Columbia v. Heller (2008) Important?

District of Columbia v. Heller (2008) was the first time the Supreme Court interpreted what the Second Amendment meant for an individual’s right to possess weapons for private uses like self defense.

The District of Columbia had one of the strictest gun laws in the country. It included a total ban on handguns. Further, long guns had to be kept unloaded and disassembled or trigger-locked. Heller believed the law made it impossible for him to defend himself in his home. He argued that it violated the Second Amendment.

The District of Columbia argued that the preamble of the Second Amendment, which refers to militia service, secured the “right of the people” to have weapons only in connection with militia service. The city also pointed out that the law did not ban all guns, and that it was a reasonable way to prevent crime.

The Court agreed with Heller and overturned three parts of the District’s law. The Court reasoned that the preamble gave one reason for the amendment, but did not limit the right. The Court also reasoned that elsewhere in the Constitution, like in the First, Fourth, and Ninth Amendments, the phrase “the right of the people” is used only to refer to rights held by people as individuals.

Finally, the Court reasoned that the right to own weapons for self-defense was an “inherent” [natural] right of all people. “It has always been widely understood that the Second Amendment, like the First and Fourth Amendments, codified a preexisting right,” the majority stated.

Four of the nine Supreme Court Justices disagreed with the Court’s ruling. The dissenters agreed that the Second Amendment protected an individual right. However, they argued that an individual’s right to bear arms was limited by the amendment’s preamble. One dissenting Justice argued that the Second Amendment’s preamble showed the Founders’ “single-minded focus” on protecting “military uses of firearms, which they viewed in the context of service in state militias.”

One thing is certain. Like all other rights in the Bill of Rights (such as freedom of speech and press), the right to keep and bear arms is not an absolute right. Working out the limits of the Second Amendment’s protection continues to challenge society.