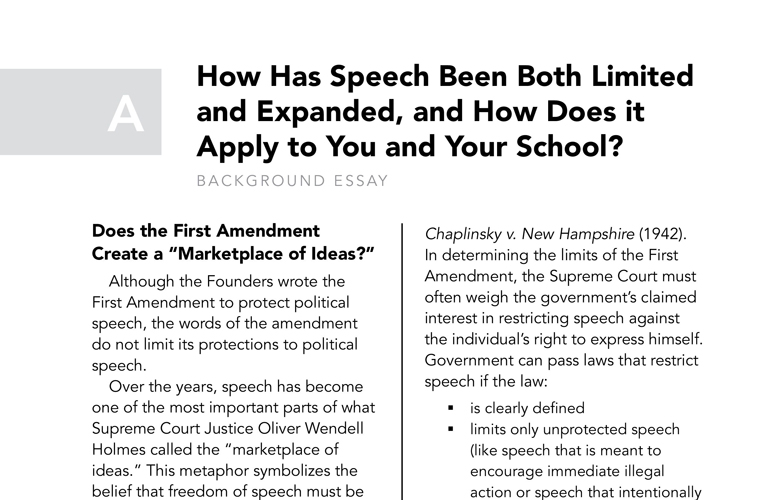 How Has Speech Been Both Limited and Expanded, and How Does it Apply to You and Your School? Background Essay

Does the First Amendment Create a “Marketplace of Ideas?”

Over the years, speech has become one of the most important parts of what Supreme Court Justice Oliver Wendell Holmes called the “marketplace of ideas.” This metaphor symbolizes the belief that freedom of speech must be allowed as far as possible, and citizens must be free to choose from among competing voices. In the words of Justice Anthony Kennedy, “the First Amendment confirms the freedom to think for ourselves.”

Does the Marketplace Require That All Speech Be Allowed?

Free speech has never been considered an unlimited right. It does not, for example, protect yelling “FIRE!” in a crowded theater if there is no fire, which would likely start a dangerous rush for the door. It also does not protect “fighting words,” or words that cause an immediate breach of peace [immediate illegal action], according to Chaplinsky v. New Hampshire (1942). In determining the limits of the First Amendment, the Supreme Court must often weigh the government’s claimed interest in restricting speech against the individual’s right to express himself. Government can pass laws that restrict speech if the law:

An important case in defining the limits of the First Amendment is Schenck v. United States (1919). In this case, Charles Schenck was handing out pamphlets urging people both to petition the government to repeal the World War I draft law and, if drafted, to break the law by refusing to comply. He was arrested for encouraging people to break the law.

The Supreme Court unanimously agreed that the First Amendment did not protect Schenck’s actions. The country’s interest in fighting World War I was more important than Schenck’s right to free speech. Schenck’s actions, the Court concluded, presented a “clear and present danger” to the country. After the Schenck decision, both the courts and the public have adopted the “clear and present danger” test when debating whether or not speech can be reasonably limited.

How has the “Marketplace” Analogy Helped to Expand Speech into Expression?

Since the Schenck case, the Supreme Court has broadened the definition of speech. First Amendment protections are now applied to many expressive activities that are “akin [like, similar] to pure speech.”

In Miller v. California (1973), the Supreme Court ruled that materials that some Americans might find to be “obscene” are protected by the First Amendment if the materials have “serious literary, artistic, political or scientific value.” The ruling in Miller was expanded even further in Jenkins v. Georgia (1973), which said that citizen juries did not have “unbridled discretion” [full power] to determine what qualified as obscene. The internet has further broadened the “marketplace” in this area of the First Amendment. Indecent photos can be legally posted online (Reno v. ACLU, 1997). The Supreme Court even ruled that computer-generated child pornography, where no real children are harmed in its production, is protected free speech (Ashcroft v. Free Speech Coalition, 2002).

The spending of money to advocate political causes, or to help candidates get elected, is considered speech in Buckley v. Valeo (1976). This was expanded even further in 2010 with Citizens United v. Federal Elections Commission. The Court ruled that individuals assembled into corporations and groups, so-called “special interests,” are also protected by the First Amendment. This has proven a very controversial ruling, but it was upheld by the Supreme Court in 2012 (Western Tradition Partnership, Inc. v. Attorney General of Montana).

An equally controversial form of speech is symbolic speech, or conveying a message through action. Ruling that “one man’s vulgarity is another’s lyric,” wearing clothing that contains an offensive message is protected through Cohen v. California (1971). The Court upheld the burning of a U.S. flag as a method of expression in Texas v. Johnson (1989). This concept was extended in Virginia v. Black (2003), which ruled that cross-burning was protected speech, so long as it was not meant as a form of direct intimidation.

How Does the Marketplace Apply to You and Your School?

Schools have long been considered a “special place” by the Supreme Court. While you do have constitutional protections at school, the Court has drawn a line between your rights and the abilities of school officials to preserve the unique goal of schools.

The Supreme Court applied the principles of expression in West Virginia v. Barnette (1943). In this case a group of Jehovah’s Witnesses refused to participate in reciting the Pledge of Allegiance, remaining seated and silent. Their silence was not “speech,” but it was a form of expression, they argued. The Supreme Court agreed, and upheld a student’s right to express himself through nonparticipation.

In the majority opinion, Justice Robert Jackson noted that an important aspect of our constitutional rights is that government officials are not allowed to force people to express views about politics, religion, or other matters.

The most famous case of student speech in school came with Tinker v. Des Moines (1969). In Tinker, the Supreme Court ruled that wearing black armbands to protest the Vietnam War was protected by the First Amendment. In ruling that students do not lose their “rights to freedom of speech or expression at the schoolhouse gate,” the Supreme Court found that a school could not restrict the expressive rights of students unless it could show that a “substantial disruption” would occur as a result of the expression.

The Court has refined its ruling in Tinker since 1969. In Bethel School District No. 403 v. Fraser (1986), the Court ruled that a student’s speech nominating a classmate to student government containing “vulgar and offensive” language was not protected expression. The Court found that the First Amendment did not require school officials to allow such speech. In doing so, the Supreme Court drew a line between the type of political speech protected in Tinker with other forms of speech that schools are free to prohibit.

Similarly, in 2002, 18-year old Joseph Frederick hung a banner reading “Bong Hits 4 Jesus” on public property across the street from the school during a school-sponsored, outside event. His banner was taken down by the school principal, and Frederick was suspended. Citing the school’s interest in preventing students from advocating illegal drug use, the Supreme Court ruled that Frederick’s speech was not protected in Morse v. Frederick (2007). While the speech might have contained a political message, the Court ruled that the special goal of the school to protect students from dangerous behavior outweighed Frederick’s right to express himself.

In short, you DO have the right to express yourself in school. That right, however, is not unlimited and your school may reasonably limit it in ways that might not be acceptable in general society. School administrators have fairly broad discretion to limit or punish student speech that either violates school rules or might interfere with educational or disciplinary goals, like classroom learning and student safety.