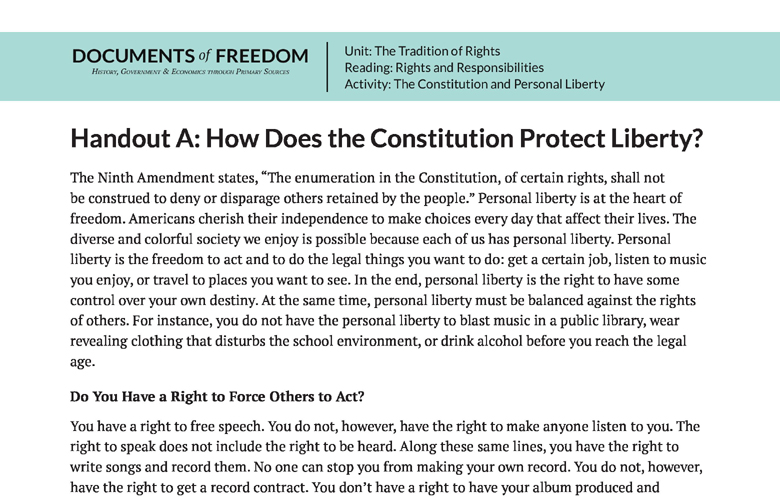 Handout A: How Does the Constitution Protect Liberty?

The Ninth Amendment states, “The enumeration in the Constitution, of certain rights, shall not be construed to deny or disparage others retained by the people.” Personal liberty is at the heart of freedom. Americans cherish their independence to make choices every day that affect their lives. The diverse and colorful society we enjoy is possible because each of us has personal liberty. Personal liberty is the freedom to act and to do the legal things you want to do: get a certain job, listen to music you enjoy, or travel to places you want to see. In the end, personal liberty is the right to have some control over your own destiny. At the same time, personal liberty must be balanced against the rights of others. For instance, you do not have the personal liberty to blast music in a public library, wear revealing clothing that disturbs the school environment, or drink alcohol before you reach the legal age.

Do You Have a Right to Force Others to Act?

There is no right to force a record label to do these things for you. This principle demonstrates how personal liberty goes hand in hand with personal responsibility. There are numerous rights which guarantee that people are free to go after their own dreams and goals. This fulfills the inalienable right to pursue happiness stated in the Declaration of Independence.

What Rights Does the Ninth Amendment Protect?

The Bill of Rights was added to make sure the federal government did not intrude too much into peoples’ lives. But adding the amendments was controversial. It would be impossible to list every right. The Federalists worried that listing some rights might mean that others would be thought of as less important. To guard against this, the Ninth Amendment was included in the Bill of Rights.

The Ninth Amendment acknowledges the people’s unenumerated rights, or rights not listed in the first eight amendments or elsewhere in the Constitution. Of course, this often leaves open as many questions as it answers. Among the rights listed in the first eight are speech, religion, property and others. What rights does the Ninth Amendment cover? It does not say. Because of its broad scope, the Ninth Amendment is one key to the defense of personal liberty. Another consequence of its broad scope is that many believe that where the Constitution does not specifically recognize a particular right, it should be left to the people and their elected officials to determine whether a right exists. This raises the issue of balancing personal liberty with democracy.

Sometimes the Supreme Court decides that the listed rights imply the existence of a right that is not specifically mentioned. A famous example of this is the right to privacy. The First Amendment guarantees that you can associate with whomever you like. The Third and Fourth Amendments promise that the government cannot intrude into your home arbitrarily and without legal cause. The Fifth Amendment assures that you can keep silent if accused of a crime. The Supreme Court first identified and labeled this right “privacy” in Griswold v. Connecticut (1965). The right to privacy is involved in many issues of personal liberty including contraception, abortion, gay rights, and drug testing of students, athletes, and workers. The Ninth Amendment alone has rarely been expressly used to claim unenumerated rights.

What Does Due Process Mean?

The Fifth and Fourteenth Amendments are crucial in protecting personal liberties such as property, contracts, and so forth. The Fifth and Fourteenth Amendments protect the individual’s right to due process. Due process entitles all citizens to fair treatment by the government. For instance, it would be unfair for the government to skip part of a trial. The government cannot take your property away from you without compensating you for your loss. Due process also means that the law itself must be constitutional. Due process rights protect personal liberty in that they check government power.

Lawmakers must write legislation that respects individual rights, and those laws must be enforced fairly. One thing is certain: personal liberties are among the most hotly debated issues today. What kind of government involvement in peoples’ lives is appropriate? The question raises issues that are fundamental to liberty.

“You have a right to free speech. You do not, however, have the right to make anyone listen to you. The right to speak does not include the right to be heard … This principle demonstrates how personal liberty goes hand in hand with personal responsibility.”