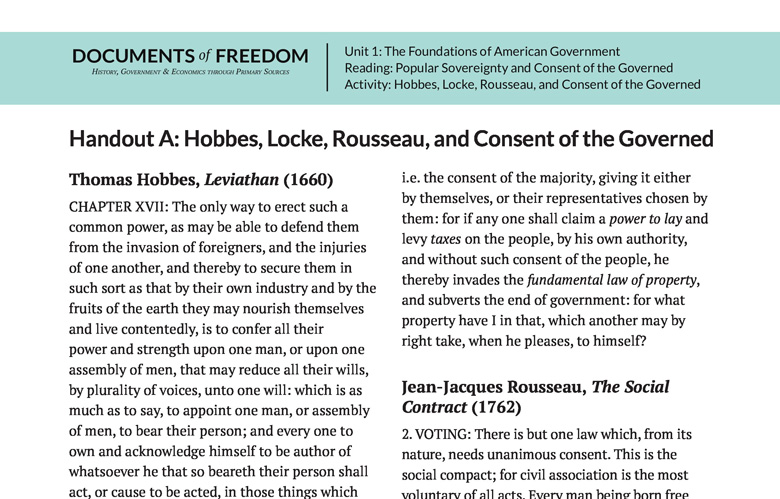 Handout A: Hobbes, Locke, Rousseau, and Consent of the Governed

CHAPTER XVII: The only way to erect such a common power, as may be able to defend them from the invasion of foreigners, and the injuries of one another, and thereby to secure them in such sort as that by their own industry and by the fruits of the earth they may nourish themselves and live contentedly, is to confer all their power and strength upon one man, or upon one assembly of men, that may reduce all their wills, by plurality of voices, unto one will: which is as much as to say, to appoint one man, or assembly of men, to bear their person; and every one to own and acknowledge himself to be author of whatsoever he that so beareth their person shall act, or cause to be acted, in those things which concern the common peace and safety; and therein to submit their wills, every one to his will, and their judgements to his judgement. This is more than consent, or concord; it is a real unity of them all in one and the same person, made by covenant of every man with every man, in such manner as if every man should say to every man: I authorise and give up my right of governing myself to this man, or to this assembly of men, on this condition; that thou give up, thy right to him, and authorise all his actions in like manner.

140. It is true, governments cannot be supported without great charge, and it is fit every one who enjoys his share of the protection, should pay out of his estate his proportion for the maintenance of it. But still it must be with his own consent, i.e. the consent of the majority, giving it either by themselves, or their representatives chosen by them: for if any one shall claim a power to lay and levy taxes on the people, by his own authority, and without such consent of the people, he thereby invades the fundamental law of property, and subverts the end of government: for what property have I in that, which another may by right take, when he pleases, to himself?

2. VOTING: There is but one law which, from its nature, needs unanimous consent. This is the social compact; for civil association is the most voluntary of all acts. Every man being born free and his own master, no one, under any pretext whatsoever, can make any man subject without his consent. To decide that the son of a slave is born a slave is to decide that he is not born a man…

If then there are opponents when the social compact is made, their opposition does not invalidate the contract, but merely prevents them from being included in it. They are foreigners among citizens. When the State is instituted, residence constitutes consent; to dwell within its territory is to submit to the Sovereign…

Apart from this primitive contract, the vote of the majority always binds all the rest. This follows from the contract itself. But it is asked how a man can be both free and forced to conform to wills that are not his own. How are the opponents at once free and subject to laws they have not agreed to?