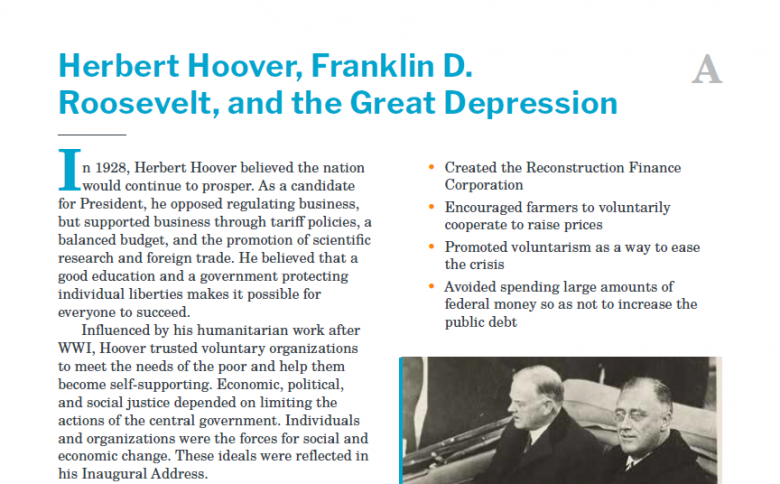 In 1928, Herbert Hoover believed the nation would continue to prosper. As a candidate for President, he opposed regulating business, but supported business through tariff policies, a balanced budget, and the promotion of scientific research and foreign trade. He believed that a good education and a government protecting individual liberties makes it possible for everyone to succeed.

Influenced by his humanitarian work after WWI, Hoover trusted voluntary organizations to meet the needs of the poor and help them become self-supporting. Economic, political, and social justice depended on limiting the actions of the central government. Individuals and organizations were the forces for social and economic change. These ideals were reflected in his Inaugural Address.

However, eight months after Hoover’s inauguration, the economy collapsed. The stock market crash of October 1929 signaled serious underlying problems in the economy. Business failures, home foreclosures, bank closures, and spiraling unemployment rippled across the nation. At first Hoover believed that this downturn was similar to the periodic recessions that were typical of the American business cycle.

About a year later, Hoover acknowledged the Depression. He again spelled out his commitment to voluntary, community-based solutions. However, he also pointed out that the federal government was working to promote people’s well-being through large-scale public works projects.

Hoover took the following actions in response to the depression:

But these efforts by the federal government did not stem the economic disaster. By 1932, the unemployment rate was twenty-five percent. Homeless people lived in shanty-towns called “Hoovervilles” in many cities, and the Gross National Product had fallen from a high of over $100 billion in 1929 to $55 billion.

Challenging Hoover in the Presidential campaign of 1932 was the Democratic nominee, Franklin Delano Roosevelt. He projected a positive, energetic, and imaginative image, promising the American people a “new deal.”

FDR stated that the economic condition of the country was a bigger emergency than the nation had faced upon entering World War I. He charged the Hoover administration with having ignored “the forgotten man at the bottom of the economic pyramid.”

He believed that that the nation’s economic woes were the result of too much influence by a small group of wealthy men motivated by selfish goals. Their exercise of property rights had interfered with the liberty of individuals, and government had to intervene in order to protect the less fortunate. He supported government planning for social and economic problems.

Roosevelt easily won the election in November of 1932 with almost sixty percent of the popular vote. In his First Inaugural Address, he encouraged the American people to find hope in their history of overcoming obstacles. He stated that “the only thing we have to fear is fear itself….” Roosevelt praised the Constitution’s balance between executive and legislative authority. But he stated that he was prepared to ask Congress for more power to deal with the emergency, just as would be the case in the event of a military attack. His plan was one of government action to bring about immediate relief, short-term recovery, and long- term reform.

In the first hundred days of the new administration, Congress quickly approved a wide variety of programs called the First New Deal. The Federal Deposit Insurance Corporation, National Industrial Recovery Act, Civilian Conservation Corps, Public Works Administration, and Tennessee Valley Authority were among the major pieces of legislation. All significantly increased the role and the size of the federal government.

After the 1934 election, Roosevelt worked to extend New Deal reforms through measures designed to provide more benefits to the “forgotten man.” Extensive public works projects, the Social Security Act, increased income taxes on the wealthy, and several programs intended to help farmers, laborers, and the unemployed made up the Second New Deal.

Though the economy was far from healthy after four years of the New Deal, (the unemployment rate in 1936 was still seventeen percent), Roosevelt won over sixty percent of the popular vote in the 1936 Presidential Election.

In his Second Inaugural Address, Roosevelt explained that the Constitution was sufficient to solve the problems of increasingly complex civilization. In expanding the reach of the federal government to solve economic problems, he asserted that Americans were “writing a new chapter in our book of self- government.” But Americans were not, he said, changing the essential foundations established in 1789.

Throughout the 1930s, Herbert Hoover continued to speak out about his opposition to the New Deal. He championed his belief in an America whose foundations were individual liberties, limited governments, and self-reliant, responsible citizens. Roosevelt continued to support legislation and executive actions which promoted the general welfare, increased the role of government in the lives of individuals, and sought to achieve social justice through federal action.

The debate over the federal government’s commitment to “promote the general welfare and secure this blessings of liberty to ourselves and our posterity” (as well as to whether the actions of either President shortened or prolonged the Depression) continues today.