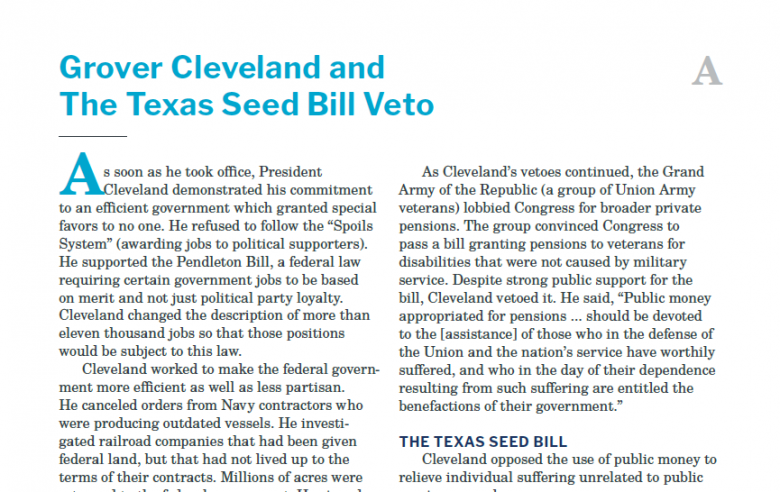 As soon as he took office, President Cleveland demonstrated his commitment to an efficient government which granted special favors to no one. He refused to follow the “Spoils System” (awarding jobs to political supporters). He supported the Pendleton Bill, a federal law requiring certain government jobs to be based on merit and not just political party loyalty. Cleveland changed the description of more than eleven thousand jobs so that those positions would be subject to this law.

Cleveland worked to make the federal government more efficient as well as less partisan. He canceled orders from Navy contractors who were producing outdated vessels. He investigated railroad companies that had been given federal land, but that had not lived up to the terms of their contracts. Millions of acres were returned to the federal government. He signed the Interstate Commerce Act in 1887, which was intended to stop railroads’ discriminatory practices favoring big business.

With a surplus in the US Treasury, he called for lower taxes. Since there was no income tax at that time, this meant reductions in protective tariffs (import taxes).

As he told a friend, Cleveland understood his chief legislative duty to be stopping bad laws, rather than trying to convince Congress to pass good ones. Cleveland used the veto more than any other US President before or since. In his first term alone, the Democratic President vetoed more than 400 bills passed by the Republican Congress.

After the Civil War, claims for pensions poured in from people claiming to be veterans or widows of veterans. While many were genuine, many more were falsified. More than half of the bills Cleveland vetoed in his first term were fraudulent claims for Civil War pensions.

As Cleveland’s vetoes continued, the Grand Army of the Republic (a group of Union Army veterans) lobbied Congress for broader private pensions. The group convinced Congress to pass a bill granting pensions to veterans for disabilities that were not caused by military service. Despite strong public support for the bill, Cleveland vetoed it. He said, “Public money appropriated for pensions … should be devoted to the [assistance] of those who in the defense of the Union and the nation’s service have worthily suffered, and who in the day of their dependence resulting from such suffering are entitled the benefactions of their government.”

Cleveland opposed the use of public money to relieve individual suffering unrelated to public service even when the suffering was genuine. One of Cleveland’s most famous vetoes was his veto of the Texas Seed Bill in 1887. A long and severe drought had stricken areas of Texas. With no grass to graze, eighty-five percent of cattle in the western part of the state died. Those cattle that remained were starving, often motherless calves. Many farmers were also close to starvation and had eaten their seed corn to survive. Congress authorized a special appropriation to send seeds to the drought- stricken farmers. The amount ($10,000, or approximately
$223,000 in today’s dollars) was small and the need was great, but Cleveland vetoed the bill.

His veto message expressed his commitment to the Constitution and the importance of private charity. He said that while he thought the intentions of the bill were good, he had to withhold his approval. He wrote:

“I can find no warrant for such an appropriation in the Constitution, and I do not believe that the power and duty of the general government ought to be extended to the relief of individual suffering which is in no manner properly related to the public service or benefit. A prevalent tendency to disregard the limited mission of this power and duty should, I think, be steadfastly resisted, to the end that the lesson should be constantly enforced that, though the people support the government, the government should not support the people.”

Furthermore, Cleveland said, it would weaken the “bonds of a common brotherhood” for the government to provide assistance to individuals where individuals, families, communities and private charities otherwise would.

Finally, the veto message suggested that if Congress wanted to relieve the suffering of Texas farmers, Senators and Representatives from each state could voluntarily give up the share of grain distributed by the Department of Agriculture each year. “The constituents, for whom in theory this grain is intended, could well bear the temporary deprivation, and the donors would experience the satisfaction attending deeds of charity.”

Cleveland’s fight against protective tariffs was unpopular among the groups the tariffs protected, and Cleveland lost the Presidency to William Henry Harrison in 1888. (Cleveland won a plurality of the popular vote, but lost the electoral vote and therefore the Presidency.) As the Cleveland’s were leaving Washington DC, the First Lady is said to have told the White House staff to keep an eye on the furniture because they’d be back—and she was right. Cleveland was elected to the Presidency again in 1892, the only President ever to serve two non-consecutive terms.

In his second term, Cleveland worked to maintain the gold standard, which he thought was the only guarantee of a stable currency. He sent federal troops to suppress the violent Pullman strike, where rail workers refused to switch Pullman cars and crippled mail service west of Chicago. Congress went on to pass lower tariffs, though they were not as low as Cleveland had hoped. The New York Sun wrote after President Cleveland had left office, “As President, Mr. Cleveland enforced the laws and did not truckle to organized violence or crouch before public clamor. [He] is sure of an honorable place in history and of the final approval of his countrymen.”