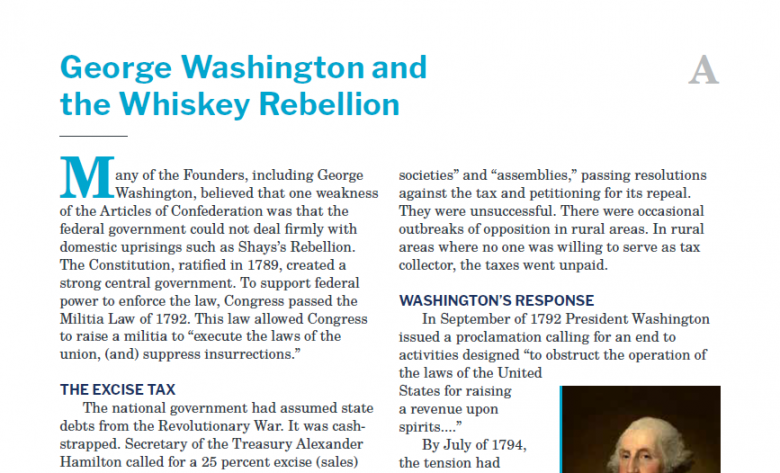 George Washington and the Whiskey Rebellion

Many of the Founders, including George Washington, believed that one weakness of the Articles of Confederation was that the federal government could not deal firmly with domestic uprisings such as Shays’s Rebellion. The Constitution, ratified in 1789, created a strong central government. To support federal power to enforce the law, Congress passed the Militia Law of 1792. This law allowed Congress to raise a militia to “execute the laws of the union, (and) suppress insurrections.”

The national government had assumed state debts from the Revolutionary War. It was cashstrapped. Secretary of the Treasury Alexander Hamilton called for a 25 percent excise (sales) tax on liquor. The proposal was opposed by some in Congress who feared it would be oppressive. One Senator warned that the people would resist the tax: “War and bloodshed are the most likely consequence of all this.” Congress passed the tax in 1791.

Anger about the tax was widespread along the frontier from Pennsylvania to Georgia. Smaller distillers and farmers especially hated the tax, as it favored larger liquor producers with a “flat rate” that allowed them to pay less. Cash-poor farmers (who grew the grains used to make whiskey) were hit very hard when distilleries bought less of their crops.

Many Americans along the frontier resented the tax from a distant legislature that they did not believe represented them well: Congress had failed to secure them from Indian attacks or put their interests first in other ways. To them, this new excise was like the unfair taxes imposed by the British just two decades before.

Those opposed to the tax met in “democratic societies” and “assemblies,” passing resolutions against the tax and petitioning for its repeal. They were unsuccessful. There were occasional outbreaks of opposition in rural areas. In rural areas where no one was willing to serve as tax collector, the taxes went unpaid.

In September of 1792 President Washington issued a proclamation calling for an end to activities designed “to obstruct the operation of the laws of the United States for raising a revenue upon spirits….”

By July of 1794, the tension had reached a breaking point. Tax collectors were harassed, tarred and feathered; one’s home was burned. In Western Pennsylvania, the rebellion was intense. Reports told that six thousand people were camped outside Pittsburgh threatening to march on the town.

Washington believed he had to act. He and his cabinet members met with Pennsylvania officials on August 2, 1794. They decided to present evidence of the violent resistance to Associate Justice of the Supreme Court James Wilson. In his notes of the meeting, one cabinet member explained, “This step was urged by the necessity of understanding without delay all the means, vested in the President for suppressing the progress of the mischief.” After reviewing the evidence, Justice Wilson certified that the situation could not be controlled by only the civil authorities. A military response could proceed.

On August 7, Washington issued a proclamation commanding all “insurgents” to “disperse and retire peaceably to their respective abodes.” He listed the illegal actions of the protestors: destroying property, mistreating tax collectors, robbing officials’ homes, and “other outrages.” Washington cited Wilson’s ruling, the 1792 Militia Act, and his duty to “cause the laws to be duly executed” as support for his command. He set a deadline of September 1—just over three weeks from the date of his proclamation.

The rebellion continued, so Washington ordered the militia to assemble against the insurgents. On September 25, 1794, he issued another Proclamation which read in part,

“…I, George Washington, President of the United States, in obedience to that high and irresistible duty consigned to me by the Constitution ‘to take care that the laws be faithfully executed,’ … do hereby declare and make known that… a militia…force which…is adequate to the exigency is already is motion…”

Washington had recruited men from Pennsylvania, Maryland, and New Jersey. In total, there were almost 13,000 men—about as many as had served in the entire Continental Army that defeated the British. Washington led the troops into Bedford—the first and only time a sitting US President has led troops into the field.

By the end of November, more than 150 people had been arrested; most were later freed due to lack of evidence. Two were convicted of treason, but Washington later pardoned those two. Washington’s strong response to the Whiskey Rebellion became, as future-President James Madison put it, “a lesson to every part of the Union against disobedience to the laws.”

Madison did not approve, however, when Washington condemned the “combinations” and “self-created societies” that petitioned Congress and organized resistance to the tax in his Sixth Annual Message to Congress later that fall. He believed the President had gone too far by condemning what Madison believed were activities protected by the First Amendment.

Public hostility to the excise tax, as well as negative reaction to Washington’s actions, were partly responsible for growing opposition to the Federalist Party. Thomas Jefferson, who had resigned as Washington’s Secretary of State amid growing conflict with Hamilton, hinted that the crisis was exaggerated and the show of force was a political move. “An insurrection was announced and proclaimed and armed against, but could never be found,” Jefferson said. When the Federalists in Congress and the White House were turned out of office in 1800 and Jefferson was elected President, the excise tax was repealed.