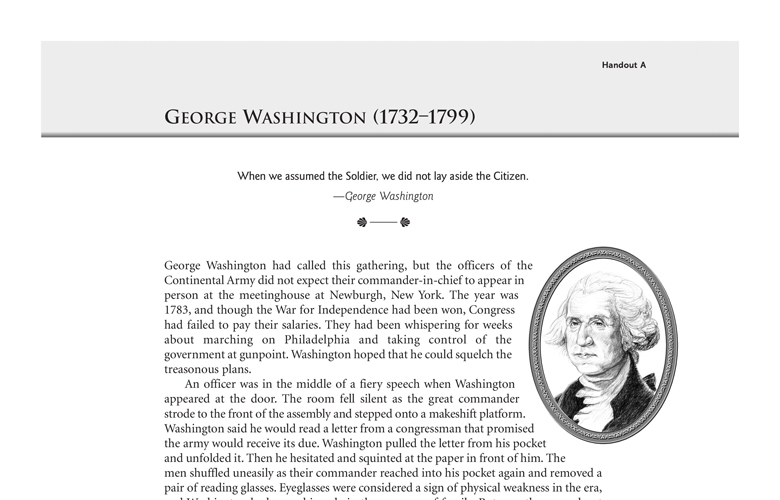 In this lesson, students will study the life of George Washington.

When we assumed the Soldier, we did not lay aside the Citizen. – George Washington

George Washington had called this gathering, but the officers of the Continental Army did not expect their commander-in-chief to appear in person at the meetinghouse at Newburgh, New York. The year was 1783, and though the War for Independence had been won, Congress had failed to pay their salaries. They had been whispering for weeks about marching on Philadelphia and taking control of the government at gunpoint. Washington hoped that he could squelch the treasonous plans.

An officer was in the middle of a fiery speech when Washington appeared at the door. The room fell silent as the great commander strode to the front of the assembly and stepped onto a makeshift platform. Washington said he would read a letter from a congressman that promised the army would receive its due. Washington pulled the letter from his pocket and unfolded it. Then he hesitated and squinted at the paper in front of him. The men shuffled uneasily as their commander reached into his pocket again and removed a pair of reading glasses. Eyeglasses were considered a sign of physical weakness in the era, and Washington had worn his only in the presence of family. But now the general put them on in front of his officers for the first time. “Gentlemen,” Washington said, “you will permit me to put on my spectacles, for I have not only grown gray but nearly blind in the service of my country.” Many officers, reminded of the sacrifices made by their honorable commander, began to weep. With that, the Newburgh Conspiracy was over.

George Washington was born on February 22, 1732, in Westmoreland County, Virginia. His father was a prominent planter who died when Washington was eleven years old. After his father’s death, Washington spent much of his time with his older half-brother, Lawrence, at his plantation home, Mount Vernon.

In 1752, Lawrence died, and Washington inherited the Mount Vernon Estate, which he eventually expanded to 8,000 acres. Washington owned thirty-six slaves at the time he acquired Mount Vernon. By the end of his life, he would own more than 300.

Soon after Lawrence’s death, Washington became a major in the Virginia militia. Washington gained recognition for his bravery in combat during the French and Indian War. He was soon made commander of the entire Virginia militia. But Washington was denied the commission in the regular British army that he so desired. Disappointed, he resigned from the militia in 1758 and returned to Mount Vernon.

The next year Washington married the wealthy widow, Martha Dandridge Custis. Martha brought twenty slaves and two children to Mount Vernon. Washington spent the next fifteen years as a gentleman farmer, concentrating on expanding his plantation and improving farming methods. He also served in the House of Burgesses.

In 1774, Washington represented Virginia at the Continental Congress. The following year, Congress selected him to be commander-in-chief of the Continental Army. Washington was a logical choice. His honored character was respected by all. He looked the part of a warrior, standing well over six feet tall with a martial demeanor. He was a Virginian, and his appointment rallied southerners to the Patriot cause.

For the next six years, Washington kept the American army alive in the face of a superior British force. In 1778, France signed a treaty of alliance with America. Three years later, Washington’s force and the French navy joined together to bottle up the main British force under Lord Cornwallis at Yorktown, Virginia. With Cornwallis’s surrender, the American Revolution was essentially over.

In 1783, Washington resigned his commission. Many observers in foreign nations were shocked. It was almost unprecedented for a victorious general to give up power voluntarily. But Washington had tried all his life to imitate two virtuous characters of ancient history.

Washington’s favorite play was Cato, written by the Englishman Joseph Addison. The title character of the play was a Roman who died resisting the tyranny of Julius Caesar. Another ancient figure whom Washington admired was the legendary Cincinnatus. He was a Roman farmer who was called upon to take command of the republic’s armies and repel Rome’s enemies. After their defeat, Cincinnatus put down his sword and became a farmer once more.

Washington did not have a quiet retirement when he returned to Mount Vernon in 1783. Mount Vernon was a crossroads for political discussion. Guests such as James Madison and Gouverneur Morris spent hours in conversation with Washington about the state of the young nation. During these talks, Washington became convinced that the Articles of Confederation needed revision. “The confederation,” Washington wrote in 1785, “appears to me to be little more than a shadow without substance.”

Washington was chosen to preside over the Constitutional Convention of 1787, which was called to strengthen the central government. Though he said almost nothing during the debates, Washington’s presence had important effects. First, it caused the delegates to be on their best behavior and reassured the country. It is also likely that the presidency would never have been entrusted to one person had the delegates in Independence Hall not known that Washington was certain to be the first chief executive.

Washington declared that the Constitution produced by the Convention was “little short of a miracle.” He accepted the electoral college’s unanimous decision that he be the first president. During his first term in office, Washington proved to be a nationalist on domestic issues, usually siding with his secretary of the treasury, Alexander Hamilton. The opposition to Hamilton’s economic program was headed by the secretary of state, Thomas Jefferson. Political parties began to form around these two men, a development that Washington strongly disliked.

Washington’s second term as president was challenged by foreign and domestic troubles. Party conflict worsened as Americans chose sides in the war between Britain and France that broke out in 1793. But Washington was able to maintain official neutrality and keep the United States out of war. The president was also compelled to put down the Whiskey Rebellion, a tax revolt by distillers in western Pennsylvania.

“First in the Hearts of His Countrymen”

At the end of his second term as president in 1797, Washington retired to Mount Vernon for the third and final time. Tired of partisan politics, committed to rotation in the office of president, and concerned that if he died in office he would set an example that the president should serve for life, Washington chose not to seek a third term. It is often said that by doing so, he established the two-term tradition for presidents.

Washington’s prediction that he would not survive another four years proved accurate. He died of an inflamed throat on December 14, 1799. In his will, he provided for the freeing of all his slaves once Martha died. His death brought an outpouring of grief throughout America. Mock funerals were held in nearly every city, and hundreds of eulogies were given in his honor. Washington had justly earned the title, “Father of His Country.”