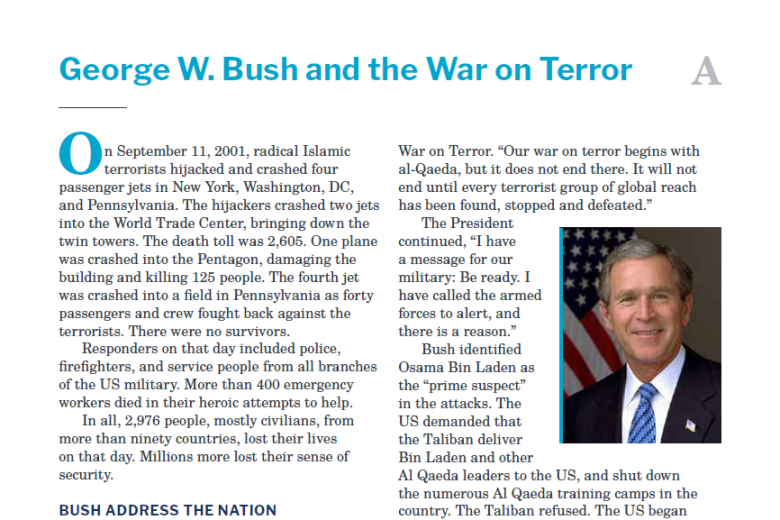 George W. Bush and the War on Terror

On September 11, 2001, radical Islamic terrorists hijacked and crashed four passenger jets in New York, Washington, DC, and Pennsylvania. The hijackers crashed two jets into the World Trade Center, bringing down the twin towers. The death toll was 2,605. One plane was crashed into the Pentagon, damaging the building and killing 125 people. The fourth jet was crashed into a field in Pennsylvania as forty passengers and crew fought back against the terrorists. There were no survivors.

Responders on that day included police, firefighters, and service people from all branches of the US military. More than 400 emergency workers died in their heroic attempts to help.

In all, 2,976 people, mostly civilians, from more than ninety countries, lost their lives on that day. Millions more lost their sense of security.

In the days following the attacks, US and British intelligence confirmed that Al- Qaeda, led by Osama bin Laden, had planned and carried out the attacks. On September 20, President George W. Bush addressed Americans—many of whom had never heard of Al-Qaeda—in a televised speech before a joint session of Congress.

Bush contrasted the September 11 attacks on civilian targets with December 7, 1941 when the Japanese bombed the naval base at Pearl Harbor.

He told the American people about Al-Qaeda. He explained that its members practiced “a fringe form of Islamic extremism,” and that their “directive commands them to kill Christians and Jews, to kill all Americans and make no distinctions among military and civilians, including women and children.” He explained that while the group was linked to more than sixty countries, its base was Afghanistan. He condemned the Taliban regime which controlled Afghanistan, and announced the beginning of a War on Terror. “Our war on terror begins with al-Qaeda, but it does not end there. It will not end until every terrorist group of global reach has been found, stopped and defeated.”

The President continued, “I have a message for our military: Be ready. I have called the armed forces to alert, and there is a reason.”

Bush identified Osama Bin Laden as the “prime suspect” in the attacks. The US demanded that the Taliban deliver Bin Laden and other Al Qaeda leaders to the US, and shut down the numerous Al Qaeda training camps in the country. The Taliban refused. The US began bombing Afghanistan on October 7, 2001.

Two months later, in November of 2001, President Bush approved the use of Military Tribunals to try accused terrorists, including many individuals captured in Afghanistan. Bush said that the Tribunals were needed “to protect the United States and its citizens, and for the effective conduct of military operations and prevention of terrorist attacks.” A detention camp was set up at the US Naval base in Guantanamo Bay, Cuba.

The first Military Tribunals in the US were held during the Revolutionary War, and have been a part of every war in US history through World War II. During World War II, the Supreme Court unanimously upheld their use for unlawful combatants, even when the accused were US citizens. (At the time Bush was President, no President had ever asserted that the US should extend Bill of Rights protections to foreigners accused of making war against the US.)

A little over a month after the first prisoners arrived at Guantanamo Bay, the first habeas corpus petition (a petition challenging detention) was filed. That case was dismissed. More petitions followed and were also dismissed.

The Years that Followed

Public unease with the indefinite detention of suspected terrorists at Guantanamo Bay grew. Bush led the US invasion of Iraq in March of 2003 on the suspicion that Saddam Hussein had weapons of mass destruction. Revelations that no such weapons were found and that Iraqi prisoners had been abused at Abu-Ghraib prison led to lower public approval of the War on Terror. The US Supreme Court stopped dismissing habeas corpus petitions and progressively expanded the rights afforded to detainees at the camp.

In 2004, the Supreme Court held in Hamdi v. Rumsfeld that habeas corpus did not depend on citizenship status. The President responded by convincing the Republican-led Congress to pass the Military Commissions Act of 2006, which addressed wartime conditions when habeas corpus did not apply to foreign enemy combatants.

In 2006, the Supreme Court held that detainees had the right to appeal their detentions in federal court case of Hamdan v. Rumsfeld.

The Supreme Court continued to chip away at the President and Congress’s power to establish the Military Tribunals in Boumediene v. Bush (2008). The Court found the Military Commissions Act of 2006 to be an unconstitutional suspension of habeas corpus. Enemy combatant detainees at Guantanamo Bay were entitled to the Fifth Amendment’s protection of due process.

In November of 2008, Barack Obama was elected President. One of his campaign pledges was to close the detention center at Guantanamo Bay by January 2010.

US troops remain in Afghanistan and Iraq, working to prevent the strengthening of Al- Qaeda.