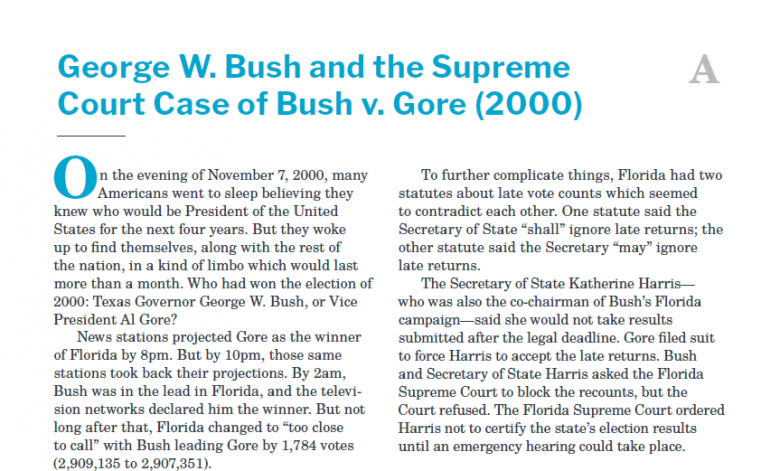 On the evening of November 7, 2000, many Americans went to sleep believing they knew who would be President of the United States for the next four years. But they woke up to find themselves, along with the rest of the nation, in a kind of limbo which would last more than a month. Who had won the election of 2000: Texas Governor George W. Bush, or Vice President Al Gore?

News stations projected Gore as the winner of Florida by 8pm. But by 10pm, those same stations took back their projections. By 2am, Bush was in the lead in Florida, and the television networks declared him the winner. But not long after that, Florida changed to “too close to call” with Bush leading Gore by 1,784 votes (2,909,135 to 2,907,351).

Florida election law called for an automatic machine recount when the margin of victory was less than one half of one percent. After the machine recount, Bush’s lead was down to 327 votes.

As allowed under Florida law, Gore requested hand recounts of ballots in Palm Beach, Broward, Miami- Dade, and Volusia counties. About 1.8 million votes had been cast in these heavily Democratic counties.

Florida law permitted the manual recounts. The law also required counties to deliver their results to the Florida Secretary of State by November 14. Some counties said this was not enough time.

The Secretary of State Katherine Harris—who was also the co-chairman of Bush’s Florida campaign—said she would not take results submitted after the legal deadline. Gore filed suit to force Harris to accept the late returns. Bush and Secretary of State Harris asked the Florida Supreme Court to block the recounts, but the Court refused. The Florida Supreme Court ordered Harris not to certify the state’s election results until an emergency hearing could take place.

The Florida Supreme Court ruled (7-0) that the recounts should continue. Further, the Court ordered that the votes had to be counted in the state’s totals despite the deadline in Florida law. The Court set a deadline of 5pm on November 26 for counties to submit their totals.

Florida Governor Jeb Bush—brother of George W. Bush—asked the US Supreme Court to review the Florida high court’s ruling. In Bush v. Palm Beach County Canvassing Board, the Supreme Court unanimously held that there was “considerable uncertainty as to the precise grounds for the decision.” The Supreme Court sent the case back to Florida with questions for the state Supreme Court.

Miami-Dade County officials stopped their manual recount, leaving 9000 votes not counted; Palm Beach County had about 1000 votes left to count by 5pm deadline on November 26. Harris turned down the county’s request for an extension and rejected the partial vote count that had been submitted by the deadline.

While all these arguments were taking place in the court system, the Florida legislature called a special session to consider whether to appoint the state’s electors itself. It did not do so.

George W. Bush argued that a statewide manual recount would violate the United States Constitution’s Fourteenth Amendment. The Fourteenth Amendment says that “no state shall… deny to any person within its jurisdiction the equal protection of the laws.” Since counties were using different standards to decide which votes would count, Bush argued that Florida was not treating all its citizens equally under the law.

Gore argued that there was a uniform standard for re-counting votes. The standard, as stated in Florida statute, was that a vote would count if the clear intent of the voter was reflected in the ballot. Gore also pointed out that there were five times as many “undervotes” (votes where machines registered no vote for President) in punch-card counties than in counties with optical voting machines. Therefore, he argued, the recount standard would actually be more uniform than the standards applied on Election Day.

The Supreme Court agreed with Bush and ruled (5-4) to halt the manual recounts. Therefore, the Florida results as certified by the Secretary of State were final, and George W. Bush became the forty-third President of the United States.