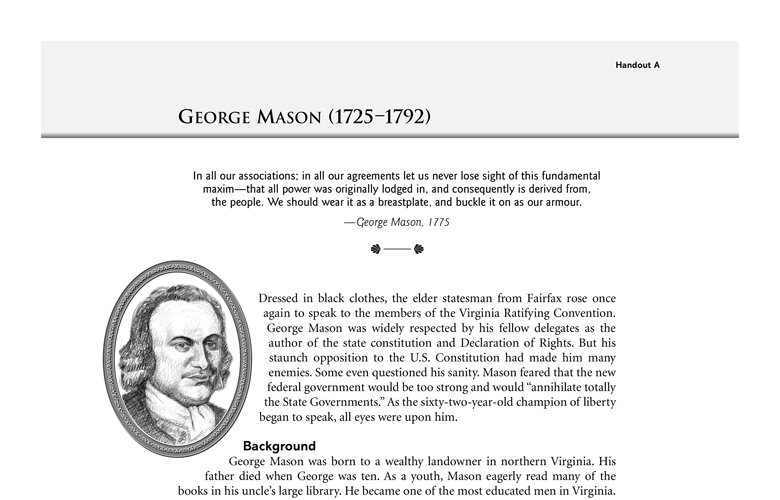 In all our associations; in all our agreements let us never lose sight of this fundamental maxim—that all power was originally lodged in, and consequently is derived from, the people. We should wear it as a breastplate, and buckle it on as our armour. – George Mason (1775)

Dressed in black clothes, the elder statesman from Fairfax rose once again to speak to the members of the Virginia Ratifying Convention. George Mason was widely respected by his fellow delegates as the author of the state constitution and Declaration of Rights. But his staunch opposition to the U.S. Constitution had made him many enemies. Some even questioned his sanity. Mason feared that the new federal government would be too strong and would “annihilate totally the State Governments.” As the sixty-two-year-old champion of liberty began to speak, all eyes were upon him.

George Mason was born to a wealthy landowner in northern Virginia. His father died when George was ten. As a youth, Mason eagerly read many of the books in his uncle’s large library. He became one of the most educated men in Virginia. Mason married at the age of twenty-five, and he eventually had nine children. His family lived on the great Virginia plantation he called Gunston Hall. About three hundred slaves also lived there. As Mason’s reputation grew, Gunston Hall became a stopping place. for political and business leaders.

George Mason took his place in local politics as a judge and town trustee. He did not like politics, but he believed it was his duty to protect the people’s liberty. This, in his view, was the main role of government. When Virginia’s liberty was threatened, Mason left home to join the battle. As George Washington’s supply officer in the French and Indian War, he fought to protect his state against a foreign power. As a member of the Virginia House of Burgesses, Mason opposed attempts by Parliament to restrict American rights. When these threats passed, he returned to Gunston Hall, content to run his plantation.

In the 1770s, Parliament continued to pass laws attacking American liberty, and Mason responded. He joined the Virginia Committee of Correspondence. This body worked with other colonies to oppose Parliament’s actions through “nonimportation agreements”—boycotts of British goods. Mason helped write the rules for the boycotts in Virginia. But Parliament refused to repeal the acts, instead passing more restrictions. George Mason then joined George Washington in writing the Fairfax Resolves in 1774. This document condemned Parliament’s acts as illegal and a violation of American liberty. Mason gave Virginians a reason to resist British interference in their lives.

The Virginia Constitution and Declaration of Rights

When it became obvious that America would separate from Great Britain, Mason supported the cause. He also wanted to make sure that the new government of Virginia would guarantee the rights of individuals. Mason was elected to represent Fairfax County at the Virginia Convention, where the new government would be formed.

James Madison was also a delegate to that convention. Madison named Mason the “master builder”—the primary author—of the Virginia Declaration of Rights and the Virginia Constitution. The Declaration of Rights argued that mankind is “by nature equally free and independent, and has certain inherent rights,” such as the rights to life, liberty, and happiness. It insisted that “a majority of the community” has the right to “reform, alter, or abolish” any government that endangers the liberty of the people. These rights were clearly not intended to apply to Virginia’s slaves. Though Mason believed that “every master of slaves is a petty tyrant,” he never freed any of his own slaves.

Mason’s ideas about natural rights and liberty were based on the ideas of the English philosophers John Locke and Algernon Sidney. The Declaration of Rights in turn influenced Jefferson’s Declaration of Independence, which was written shortly afterward. Mason listed several liberties in his Declaration, including freedom of the press, freedom of religion, and the right to a speedy trial by jury, which appeared later in the Bill of Rights. The Virginia Constitution influenced the U.S. Constitution in defining the separation of powers among the executive, legislative, and judicial branches. Virginia adopted both documents in June 1776.

Critic of the Constitution

After helping to create the new state government, Mason joined the House of Delegates and supported the war effort. He retired in 1781 due to illness and returned home. During the 1780s, many statesmen came to believe that the Articles of Confederation were a failure. At the age of sixty-two, George Mason was called on and agreed to serve Virginia once more at the Constitutional Convention in Philadelphia. James Madison admired Mason’s dedication to his country and its people: “It could not be more inconvenient to any gentleman to remain absent from his private affairs, than it was for him.”

Soon, however, Madison and Mason would become enemies. Though Mason agreed that the Articles of Confederation needed to be changed, he feared making the central government too strong. As the convention wore on, he became alarmed by several proposals aimed at reducing the power of the states. Mason believed that the states represented the people better than any national government ever could.

Mason also thought the new Constitution did not go far enough in protecting individual rights and local interests. He feared that the presidency was too powerful. His calls for a bill of rights and for an end to the importation of slaves were rejected. Mason therefore refused to sign the Constitution and spoke out against its approval. This opposition brought to an end his long friendship with George Washington. It also inspired attacks on his mental powers. One supporter of the Constitution accused him of having lost his wits in his old age. To this Mason responded: “Sir, when yours fail, nobody will ever discover it.”

Ratification and the Bill of Rights

Immediately after the convention approved the Constitution, Mason wrote his Objections to This Constitution of Government, which was published by newspapers and in pamphlet form. In this essay, Mason warned that the new federal government would destroy the states. He argued that the Constitution gave “no security” to the “Declarations of Rights in the separate States.”

Mason was elected to the Virginia Ratifying Convention that met in June 1788. There he joined Patrick Henry in the fight against ratification of the Constitution. Mason warned the members of the ratifying convention that all three branches of the federal government had been given too much power. The “necessary and proper” and “general welfare” clauses would give Congress unlimited power over the states. Mason demanded that the Constitution be changed so as to protect the people’s rights.

Madison, who was also a member of the convention, tried to reassure Mason and his allies. Madison promised that a list of amendments would be introduced in the first Congress. Based on this pledge, Virginia approved the Constitution. Madison’s twelve amendments were based on Mason’s ideas. Ten of these, known as the Bill of Rights, would be ratified in 1791. But the ten amendments were not enough to satisfy Mason, who wished to see “two or three” more added. Mason retired from public life and returned to his beloved Gunston Hall to live out his few remaining days. Mason died less than a year after the Bill of Rights went into effect.