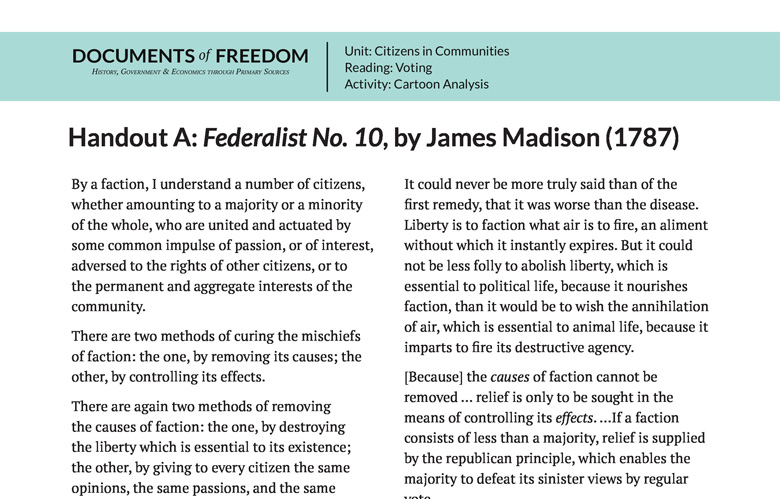 By a faction, I understand a number of citizens, whether amounting to a majority or a minority of the whole, who are united and actuated by some common impulse of passion, or of interest, adversed to the rights of other citizens, or to the permanent and aggregate interests of the community.

There are two methods of curing the mischiefs of faction: the one, by removing its causes; the other, by controlling its effects.

There are again two methods of removing the causes of faction: the one, by destroying the liberty which is essential to its existence; the other, by giving to every citizen the same opinions, the same passions, and the same interests.

It could never be more truly said than of the first remedy, that it was worse than the disease. Liberty is to faction what air is to fire, an aliment without which it instantly expires. But it could not be less folly to abolish liberty, which is essential to political life, because it nourishes faction, than it would be to wish the annihilation of air, which is essential to animal life, because it imparts to fire its destructive agency.

[Because] the causes of faction cannot be removed … relief is only to be sought in the means of controlling its effects. …If a faction consists of less than a majority, relief is supplied by the republican principle, which enables the majority to defeat its sinister views by regular vote.