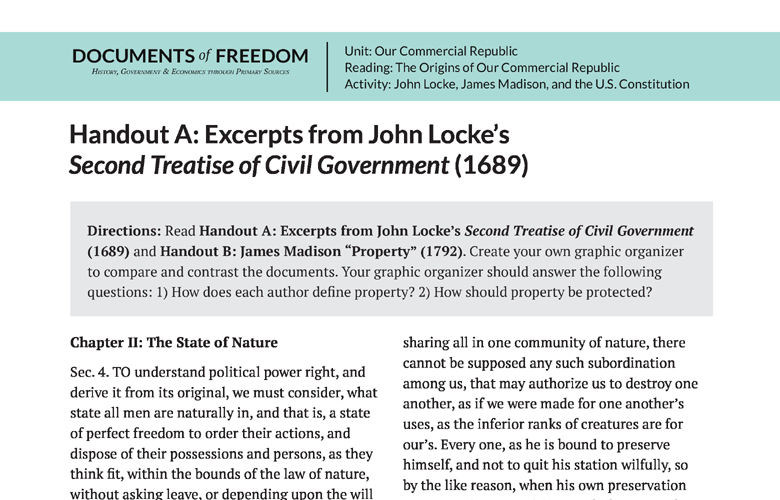 Directions: Read Handout A: Excerpts from John Locke’s Second Treatise of Civil Government (1689) and Handout B: James Madison “Property” (1792). Create your own graphic organizer to compare and contrast the documents. Your graphic organizer should answer the following questions: 1) How does each author define property? 2) How should property be protected?

Chapter II: The State of Nature

Sec. 4. TO understand political power right, and derive it from its original, we must consider, what state all men are naturally in, and that is, a state of perfect freedom to order their actions, and dispose of their possessions and persons, as they think fit, within the bounds of the law of nature, without asking leave, or depending upon the will of any other man.

Sec. 6. But though this be a state of liberty, yet it is not a state of license: though man in that state have an uncontrollable liberty to dispose of his person or possessions, yet he has not liberty to destroy himself, or so much as any creature in his possession, but where some nobler use than its bare preservation calls for it. The state of nature has a law of nature to govern it, which obliges every one: and reason, which is that law, teaches all mankind, who will but consult it, that being all equal and independent, no one ought to harm another in his life, health, liberty, or possessions: for men being all the workmanship of one omnipotent, and infinitely wise maker; all the servants of one sovereign master, sent into the world by his order, and about his business; they are his property, whose workmanship they are, made to last during his, not one another’s pleasure: and being furnished with like faculties, sharing all in one community of nature, there cannot be supposed any such subordination among us, that may authorize us to destroy one another, as if we were made for one another’s uses, as the inferior ranks of creatures are for our’s. Every one, as he is bound to preserve himself, and not to quit his station wilfully, so by the like reason, when his own preservation comes not in competition, ought he, as much as he can, to preserve the rest of mankind, and may not, unless it be to do justice on an offender, take away, or impair the life, or what tends to the preservation of the life, the liberty, health, limb, or goods of another.

Sec. 27. Though the earth, and all inferior creatures, be common to all men, yet every man has a property in his own person: this no body has any right to but himself. The labor of his body, and the work of his hands, we may say, are properly his. Whatsoever then he removes out of the state that nature hath provided, and left it in, he hath mixed his labor with, and joined to it something that is his own, and thereby makes it his property. It being by him removed from the common state nature hath placed it in, it hath by this labor something annexed to it, that excludes the common right of other men: for this labor being the unquestionable property of the laborer, no man but he can have a right to what that is once joined to, at least where there is enough, and as good, left in common for others.

Sec. 28. He that is nourished by the acorns he picked up under an oak, or the apples he gathered from the trees in the wood, has certainly appropriated them to himself. No body can deny but the nourishment is his. I ask then, when did they begin to be his? when he digested? or when he eat? or when he boiled? or when he brought them home? or when he picked them up? and it is plain, if the first gathering made them not his, nothing else could. That labor put a distinction between them and common: that added something to them more than nature, the common mother of all, had done; and so they became his private right. And will any one say, he had no right to those acorns or apples, he thus appropriated, because he had not the consent of all mankind to make them his? Was it a robbery thus to assume to himself what belonged to all in common? If such a consent as that was necessary, man had starved, notwithstanding the plenty God had given him. We see in commons, which remain so by compact, that it is the taking any part of what is common, and removing it out of the state nature leaves it in, which begins the property; without which the common is of no use. And the taking of this or that part, does not depend on the express consent of all the commoners. Thus the grass my horse has bit; the turfs my servant has cut; and the ore I have digged in any place, where I have a right to them in common with others, become my property, without the assignation or consent of any body. The labor that was mine, removing them out of that common state they were in, hath fixed my property in them.

Sec. 32. But the chief matter of property being now not the fruits of the earth, and the beasts that subsist on it, but the earth itself; as that which takes in and carries with it all the rest; I think it is plain, that property in that too is acquired as the former. As much land as a man tills, plants, improves, cultivates, and can use the product of, so much is his property. He by his labor does, as it were, enclose it from the common. Nor will it invalidate his right, to say every body else has an equal title to it; and therefore he cannot appropriate, he cannot enclose, without the consent of all his fellow commoners, all mankind. God, when he gave the world in common to all mankind, commanded man also to labor, and the penury of his condition required it of him. God and his reason commanded him to subdue the earth, i.e. improve it for the benefit of life, and therein lay out something upon it that was his own, his labor. He that in obedience to this command of God, subdued, tilled and sowed any part of it, thereby annexed to it something that was his property, which another had no title to, nor could without injury take from him.

Sec. 33. Nor was this appropriation of any parcel of land, by improving it, any prejudice to any other man, since there was still enough, and as good left; and more than the yet unprovided could use. So that, in effect, there was never the less left for others because of his enclosure for himself: for he that leaves as much as another can make use of, does as good as take nothing at all. No body could think himself injured by the drinking of another man, though he took a good draught, who had a whole river of the same water left him to quench his thirst: and the case of land and water, where there is enough of both, is perfectly the same.

Sec. 50. But since gold and silver, being little useful to the life of man in proportion to food, raiment, and carriage, has its value only from the consent of men, whereof labor yet makes, in great part, the measure, it is plain, that men have agreed to a disproportionate and unequal possession of the earth, they having, by a tacit and voluntary consent, found out, a way how a man may fairly possess more land than he himself can use the product of, by receiving in exchange for the overplus gold and silver, which may be hoarded up without injury to any one; these metals not spoiling or decaying in the hands of the possessor. This partage of things in an inequality of private possessions, men have made practicable out of the bounds of society, and without compact, only by putting a value on gold and silver, and tacitly agreeing in the use of money: for in governments, the laws regulate the right of property, and the possession of land is determined by positive constitutions.