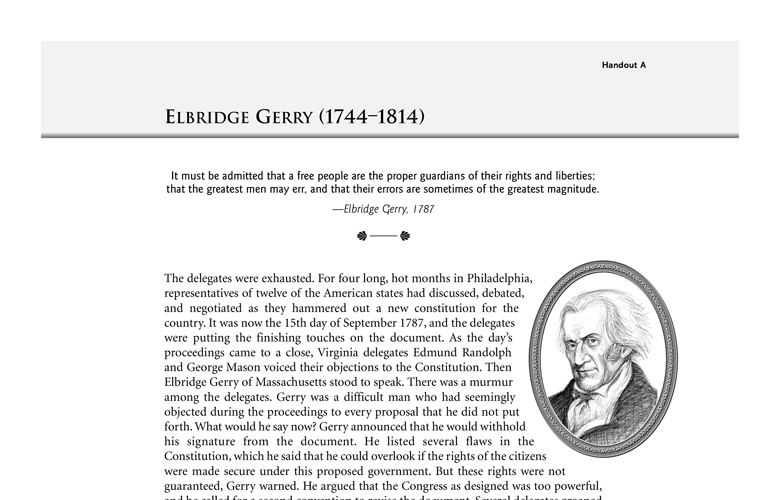 It must be admitted that a free people are the proper guardians of their rights and liberties; that the greatest men may err, and that their errors are sometimes of the greatest magnitude. – Elbridge Gerry (1787)

The delegates were exhausted. For four long, hot months in Philadelphia, representatives of twelve of the American states had discussed, debated, and negotiated as they hammered out a new constitution for the country. It was now the 15th day of September 1787, and the delegates were putting the finishing touches on the document. As the day’s proceedings came to a close, Virginia delegates Edmund Randolph and George Mason voiced their objections to the Constitution. Then Elbridge Gerry of Massachusetts stood to speak. There was a murmur among the delegates. Gerry was a difficult man who had seemingly objected during the proceedings to every proposal that he did not put forth. What would he say now? Gerry announced that he would withhold his signature from the document. He listed several flaws in the Constitution, which he said that he could overlook if the rights of the citizens were made secure under this proposed government. But these rights were not guaranteed, Gerry warned. He argued that the Congress as designed was too powerful, and he called for a second convention to revise the document. Several delegates groaned and muttered in frustration as Gerry returned to his seat.

The son of a wealthy shipping magnate, Elbridge Gerry was born in Marblehead, Massachusetts, in 1744. After graduating from Harvard in 1762, he joined the family business. He soon came to see firsthand how British economic policy hurt American merchants. Gerry began to sympathize with the American patriot movement, which openly opposed British policy toward the colonies. In 1770, he supported a successful boycott of British tea. Gerry soon became well known among Marblehead’s citizens, who sent him to the colonial legislature two years later. There Gerry met Samuel Adams, the well-respected patriot leader from Boston, Massachusetts.

Adams recruited Gerry for the patriot movement. In 1774, Gerry became convinced that the colonies needed to declare independence. Marblehead’s citizens appointed Gerry to Massachusetts’ Committee of Correspondence. This committee mustered support and spread information for the patriot cause. The colonists soon realized that war with the mother country was likely. In the Massachusetts legislature, Gerry helped Adams and John Hancock oversee military preparations. He used his shipping connections to import gunpowder and other military supplies. He also loaned money—interest free—to the cause.

Gerry was selected to attend the Continental Congress in 1775. There he worked tirelessly to convince delegates to declare independence. In the process, he won the respect of fellow delegates like John Adams, cousin of Samuel Adams. The future president declared, “If every Man here was a Gerry, the Liberties of America would be safe against the Gates of Earth and Hell.”

But Gerry was also a stubborn and difficult man. He lacked a sense of humor and seemed to enjoy arguing. He often irritated even his allies, including John Adams, who complained that Gerry’s “obstinacy . . . will risk great things to secure small ones.” In 1779, Gerry stormed out of the Continental Congress in a rage after a dispute about payments for suppliers of the Continental Army. He would not return for three years

During his service in the Continental Congress, Gerry had signed the Declaration of Independence and the Articles of Confederation. After the Revolutionary War, Gerry served from 1783–1785 in the new Congress created by the Articles. In 1786, he left Congress and served in the Massachusetts legislature. The following year, the citizens of Massachusetts chose Gerry as a delegate to the national convention in Philadelphia that had been called to revise the Articles of Confederation.

At the convention, Gerry at first adopted a moderate stance between nationalists, who favored a strong central government, and states’ rights advocates. He chaired the committee that forged the Great Compromise. This agreement provided for equal representation of the states in the Senate and proportional representation in the House of Representatives. But Gerry again was combative and, in the words of a fellow delegate, “objected to everything he did not propose.”

Soon, Gerry began to fear that the national government was being given too much power. He worried that Congress in particular would be able to trample on the rights of the people and of the states. Gerry suggested that provisions be added to the Constitution limiting Congress’ authority. Two of these passed—namely, the prohibitions against ex post facto laws and bills of attainder. Gerry also insisted, along with George Mason, that a bill of rights be added to the document. The convention voted down this idea.

On September 15, 1787, as the Philadelphia Convention drew to a close, Gerry announced that he could not sign the Constitution. He believed it would create an all-powerful central government. He sent the Massachusetts legislature a letter outlining his reasons for this decision. Gerry and the Virginians George Mason and Edmund Randolph were the only delegates who stayed until the end of the convention but did not sign the Constitution.

Once the Constitution was approved in 1788, Gerry supported the new government. He was elected to the United States House of Representatives the following year. To the surprise of many, he supported Secretary of the Treasury Alexander Hamilton’s plan to create a national bank. This measure strengthened the federal government. Gerry left Congress and returned home in 1793 to care for his sick wife and children.

In 1797, John Adams chose Gerry as one of a three-member delegation to negotiate with the French government. Tensions between the United States and Napoleonic France were high. France was at war with much of Europe at the time. Napoleon refused to allow American ships to travel to European ports. Private ships licensed by the French government attacked and sank many American merchant ships. Adams hoped that Gerry, along with Charles Cotesworth Pinckney and John Marshall, could resolve the situation.

Tensions increased when three French officials—who became known as “X, Y, and Z” among American officials in order to guard their identity—demanded a bribe from the Americans before they would open negotiations. The American delegation was outraged. Pinckney and Marshall immediately left for the United States. But Gerry, hoping to continue the negotiations and avert a war between the two countries, stayed behind. Members of the Federalist Party in Congress criticized Gerry for his action, especially his alleged partiality to France. Finally, President Adams ordered Gerry to return to the United States. The event became known as the “X, Y, Z Affair,” and it tarnished Gerry’s reputation.

Spurned by the anti-French Federalists, Gerry turned to the Democratic-Republican (or simply, Republican) Party. He was elected governor of Massachusetts in 1810 and 1811 under the banner of this party. At the end of his second term in office, Gerry approved a controversial redistricting plan. The plan created new, irregularly shaped congressional voting districts designed to give Republicans an advantage in the elections for state senate. Angry Federalists dubbed the tactic “gerrymandering,” for the awkward, salamander-like shape of one of the districts. The term is still used today to describe the drawing of districts to favor one party.

Many Massachusetts voters resented the governor’s attempt to gerrymander the state’s districts. Gerry may have lost the 1812 gubernatorial race because of his political gamesmanship. His political career, however, was not over. That same year, President James Madison selected him to run as his vice president. Gerry accepted the offer.

Madison and Gerry were victorious in the election of 1812. By the time Gerry assumed his new post, the United States was at war with Great Britain. One of Gerry’s duties as vice president was to preside over the Senate. That body, like the American public, was sharply divided between pro-war Republicans and anti-war Federalists. Gerry was already in poor health—one observer described him as an “old skeleton”—and the political battles took their toll on him. In November 1814, Gerry collapsed and died on his way to the Senate.