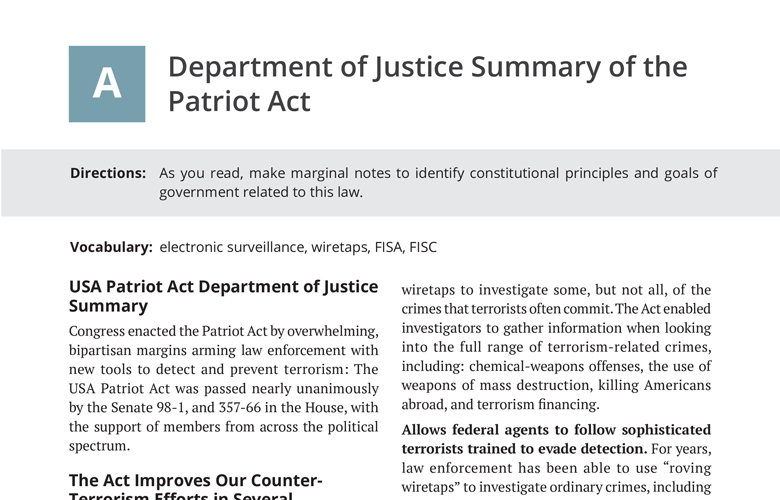 Handout A: Department of Justice Summary of USA PATRIOT Act

Directions: As you read, make marginal notes to identify constitutional principles and goals of government related to this law.

Congress enacted the Patriot Act by overwhelming, bipartisan margins arming law enforcement with new tools to detect and prevent terrorism: The USA Patriot Act was passed nearly unanimously by the Senate 98-1, and 357-66 in the House, with the support of members from across the political spectrum.

The Act Improves Our Counter-Terrorism Efforts in Several Significant Ways:

The Patriot Act allows investigators to use the tools that were already available to investigate organized crime and drug trafficking.

Many of the tools the Act provides to law enforcement to fight terrorism have been used for decades to fight organized crime and drug dealers, and have been reviewed and approved by the courts. As Sen. Joe Biden (D-DE) explained during the floor debate about the Act, “the FBI could get a wiretap to investigate the mafia, but they could not get one to investigate terrorists. To put it bluntly, that was crazy! What’s good for the mob should be good for terrorists.” (Cong. Rec., 10/25/01)

Allows law enforcement to use surveillance against more crimes of terror. Before the Patriot Act, courts could permit law enforcement to conduct electronic surveillance to investigate many ordinary, non-terrorism crimes, such as drug crimes, mail fraud, and passport fraud. Agents also could obtain wiretaps to investigate some, but not all, of the crimes that terrorists often commit. The Act enabled investigators to gather information when looking into the full range of terrorism-related crimes, including: chemical-weapons offenses, the use of weapons of mass destruction, killing Americans abroad, and terrorism financing.

Allows federal agents to follow sophisticated terrorists trained to evade detection. For years, law enforcement has been able to use “roving wiretaps” to investigate ordinary crimes, including drug offenses and racketeering. A roving wiretap can be authorized by a federal judge to apply to a particular suspect, rather than a particular phone or communications device. Because international terrorists are sophisticated and trained to thwart surveillance by rapidly changing locations and communication devices such as cell phones, the Act authorized agents to seek court permission to use the same techniques in national security investigations to track terrorists.

Allows law enforcement to conduct investigations without tipping off terrorists. In some cases if criminals are tipped off too early to an investigation, they might flee, destroy evidence, intimidate or kill witnesses, cut off contact with associates, or take other action to evade arrest. Therefore, federal courts in narrow circumstances long have allowed law enforcement to delay for a limited time when the subject is told that a judicially approved search warrant has been executed. Notice is always provided, but the reasonable delay gives law enforcement time to identify the criminal’s associates, eliminate immediate threats to our communities, and coordinate the arrests of multiple individuals without tipping them off beforehand. These delayed notification search warrants have been used for decades, have proven crucial in drug and organized crime cases, and have been upheld by courts as fully constitutional.

Allows federal agents to ask a court for an order to obtain business records in national security terrorism cases. Examining business records often provides the key that investigators are looking for to solve a wide range of crimes. Investigators might seek select records from hardware stores or chemical plants, for example, to find out who bought materials to make a bomb, or bank records to see who’s sending money to terrorists. Law enforcement authorities have always been able to obtain business records in criminal cases through grand jury subpoenas, and continue to do so in national security cases where appropriate. These records were sought in criminal cases such as the investigation of the Zodiac gunman, where police suspected the gunman was inspired by a Scottish occult poet, and wanted to learn who had checked the poet’s books out of the library. In national security cases where use of the grand jury process was not appropriate, investigators previously had limited tools at their disposal to obtain certain business records. Under the Patriot Act, the government can now ask a federal court (the Foreign Intelligence Surveillance Court), if needed to aid an investigation, to order production of the same type of records available through grand jury subpoenas. This federal court, however, can issue these orders only after the government demonstrates the records concerned are sought for an authorized investigation to obtain foreign intelligence information not concerning a U.S. person or to protect against international terrorism or clandestine intelligence activities, provided that such investigation of a U.S. person is not conducted solely on the basis of activities protected by the First Amendment.

The Patriot Act facilitated information sharing and cooperation among government agencies so that they can better “connect the dots.”

The Act removed the major legal barriers that prevented the law enforcement, intelligence, and national defense communities from talking and coordinating their work to protect the American people and our national security. The government’s prevention efforts should not be restricted by boxes on an organizational chart. Now police officers, FBI agents, federal prosecutors and intelligence officials can protect our communities by “connecting the dots” to uncover terrorist plots before they are completed. As Sen. John Edwards (D-N.C.) said about the Patriot Act, “we simply cannot prevail in the battle against terrorism if the right hand of our government has no idea what the left hand is doing” (Press release, 10/26/01)

Prosecutors and investigators used information shared pursuant to section 218 in investigating the defendants in the so-called “Virginia Jihad” case. This prosecution involved members of the Dar al-Arqam Islamic Center, who trained for jihad in Northern Virginia by participating in paintball and paramilitary training, including eight individuals who traveled to terrorist training camps in Pakistan or Afghanistan between 1999 and 2001. These individuals are associates of a violent Islamic extremist group known as Lashkar-e-Taiba (LET), which operates in Pakistan and Kashmir, and that has ties to the al Qaeda terrorist network. As the result of an investigation that included the use of information obtained through FISA, prosecutors were able to bring charges against these individuals. Six of the defendants have pleaded guilty, and three were convicted in March 2004 of charges including conspiracy to levy war against the United States and conspiracy to provide material support to the Taliban. These nine defendants received sentences ranging from a prison term of four years to life imprisonment.

The Patriot Act updated the law to reflect new technologies and new threats.

The Act brought the law up to date with current technology, so we no longer have to fight a digital age battle with antique weapons-legal authorities leftover from the era of rotary telephones. When investigating the murder of Wall Street Journal reporter Daniel Pearl, for example, law enforcement used one of the Act’s new authorities to use high-tech means to identify and locate some of the killers.

Allows law enforcement officials to obtain a search warrant anywhere a terrorist-related activity occurred. Before the Patriot Act, law enforcement personnel were required to obtain a search warrant in the district where they intended to conduct a search. However, modern terrorism investigations often span a number of districts, and officers therefore had to obtain multiple warrants in multiple jurisdictions, creating unnecessary delays. The Act provides that warrants can be obtained in any district in which terrorism-related activities occurred, regardless of where they will be executed. This provision does not change the standards governing the availability of a search warrant, but streamlines the search-warrant process.

Allows victims of computer hacking to request law enforcement assistance in monitoring the “trespassers” on their computers. This change made the law technology-neutral; it placed electronic trespassers on the same footing as physical trespassers. Now, hacking victims can seek law enforcement assistance to combat hackers, just as burglary victims have been able to invite officers into their homes to catch burglars.

The Patriot Act increased the penalties for those who commit terrorist crimes.

Americans are threatened as much by the terrorist who pays for a bomb as by the one who pushes the button. That’s why the Patriot Act imposed tough new penalties on those who commit and support terrorist operations, both at home and abroad. In particular, the Act:

Prohibits the harboring of terrorists. The Act created a new offense that prohibits knowingly harboring persons who have committed or are about to commit a variety of terrorist offenses, such as: destruction of aircraft; use of nuclear, chemical, or biological weapons; use of weapons of mass destruction; bombing of government property; sabotage of nuclear facilities; and aircraft piracy.

Enhanced the inadequate maximum penalties for various crimes likely to be committed by terrorists: including arson, destruction of energy facilities, material support to terrorists and terrorist organizations, and destruction of national-defense materials.

Enhanced a number of conspiracy penalties, including for arson, killings in federal facilities, attacking communications systems, material support to terrorists, sabotage of nuclear facilities, and interference with flight crew members. Under previous law, many terrorism statutes did not specifically prohibit engaging in conspiracies to commit the underlying offenses. In such cases, the government could only bring prosecutions under the general federal conspiracy provision, which carries a maximum penalty of only five years in prison.

Eliminates the statutes of limitations for certain terrorism crimes and lengthens them for other terrorist crimes.

The government’s success in preventing another catastrophic attack on the American homeland since September 11, 2001, would have been much more difficult, if not impossible, without the USA Patriot Act. The authorities Congress provided have substantially enhanced our ability to prevent, investigate, and prosecute acts of terror.