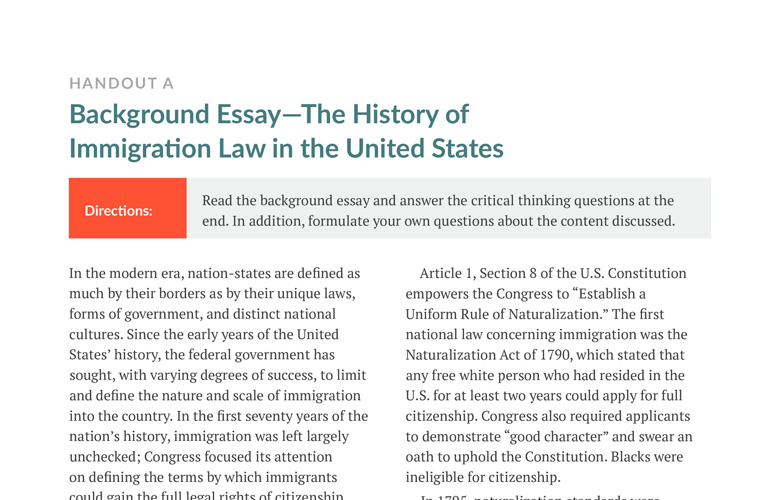 Background Essay—The History of Immigration Law in the United States

Directions: Read the background essay and answer the critical thinking questions at the end. In addition, formulate your own questions about the content discussed.

In the modern era, nation-states are defined as much by their borders as by their unique laws, forms of government, and distinct national cultures. Since the early years of the United States’ history, the federal government has sought, with varying degrees of success, to limit and define the nature and scale of immigration into the country. In the first seventy years of the nation’s history, immigration was left largely unchecked; Congress focused its attention on defining the terms by which immigrants could gain the full legal rights of citizenship. Beginning in the 1880s, however, Congress began to legislate on the national and ethnic makeup of immigrants. Lawmakers passed laws forbidding certain groups from entering the country, and restricted the number of people who could enter from particular nations. In the 1920s, Congress enacted quotas based upon immigrants’ national origin, limiting the number of immigrants who could enter from non-Western European countries. In the 1960s, immigration policy was radically transformed and the policies of the preceding generations were abolished. Through these reforms, which still determine the United States’ immigration policy today, greater numbers of Asians, Africans, and Latin Americans are permitted to enter the country than immigrants of European background, giving preferred status to these immigrant groups.

Article 1, Section 8 of the U.S. Constitution empowers the Congress to “Establish a Uniform Rule of Naturalization.” The first national law concerning immigration was the Naturalization Act of 1790, which stated that any free white person who had resided in the U.S. for at least two years could apply for full citizenship. Congress also required applicants to demonstrate “good character” and swear an oath to uphold the Constitution. Blacks were ineligible for citizenship.

In 1795, naturalization standards were changed to require five years’ prior residence in the U.S., and again in 1798 to require 14 years’ residence. The 1798 revision was passed amidst the anti-French fervor of the Quasi-War and sought to limit the influence of foreign-born citizens in federal elections. During Thomas Jefferson’s presidency, the 1798 standards were repealed to require five years’ residence once more. As immigration patterns changed over time, especially in the late 1840s and early 1850s as Irish and Germans replaced the British as the primary immigrant groups, federal immigration law remained largely unchanged. Despite anti-immigrant agitation in the 1850s and the rise of nativist political groups, no limits or quotas were imposed on immigration.

Questions still lingered about the nature of citizenship for black Americans. In December 1865, the Thirteenth Amendment was ratified, abolishing slavery in all of the states. Were emancipated slaves citizens, or not? Through the end of the Civil War, slaves had not been considered citizens and possessed none of the rights of their white countrymen. The Civil Rights Act of 1866 established that freedmen were indeed citizens. In 1868, the Fourteenth Amendment to the U.S. Constitution confirmed the position set forth in the Civil Rights Act. The amendment stated that “All persons born or naturalized in the United States and subject to the jurisdiction thereof, are citizens of the United States and of the State wherein they reside.” The amendment prohibited the states from curtailing the privileges of federal citizenship. The construction of the citizenship clause indicates that anyone born in the U.S. is automatically a citizen, and this is what federal law has maintained ever since. However, there is disagreement as to the meaning of the citizenship clause, and whether it was intended to clarify the status of emancipated slaves, or whether it was written to apply to all peoples regardless of context.

During the congressional ratification debates, members made clear the purpose of the Fourteenth Amendment. Senator and Radical Republican Thaddeus Stevens argued in 1866 that the Fourteenth Amendment was the final fulfillment of the principles of the Declaration of Independence, a law designed to ensure equal rights for all Americans no matter their race or prior status under the law. Senator Jacob Howard, one of the chief authors of the citizenship clause, reassured Congress by saying the amendment “will not, of course, include persons born in the United States who are foreigners, aliens” or had been born to foreign diplomats. Senator John Bingham echoed his colleague’s remarks and said the citizenship clause reasserts “that every human being born within the jurisdiction of the United States of parents not owing allegiance to any foreign sovereignty is, in the language of our Constitution itself, a natural-born citizen.”

The question remains whether the Fourteenth Amendment’s citizenship clause should be interpreted as a protection of the rights of citizenship of former slaves, or if it is a blanket protection for all persons born in the United States no matter their parents’ national allegiance or legal status. Current law favors the latter interpretation, and there is ongoing controversy whether children born of unnaturalized or illegal immigrants should be granted automatic citizenship.

After the Civil War, the American economy boomed as industry grew and the American West was settled and organized into new states. On the Pacific coast, the high demand for labor drew thousands of Chinese immigrants into the country to work in a variety of capacities. Most often, they worked building railroads or in mines. Others farmed or ran businesses in California’s growing cities. By the late 1870s, opposition to Chinese laborers had grown substantially, stemming from a combination of racism and the belief that Chinese laborers unfairly competed with white American laborers and stole economic opportunities from workers more deserving. Eventually, Congress passed the 1882 Chinese Exclusion Act barring virtually all new immigration from China. The act was extended in 1892 and on a permanent basis beginning in 1902. Other laws further restricted the rights and privileges of Chinese immigrants already in the United States. The Scott Act of 1888, for example, forbade Chinese immigrants who left the United States from returning. It was not until World War II, when China was a military ally of the United States, that the ban on Chinese immigration was lifted.

For most of the 1800s, the main sources of immigrants to the United States were British, Irish, German, Scandinavian, and Central European peoples. By the 1880s, immigration patterns shifted toward Eastern and Southern European groups, especially Italians, Poles, Russians, and other Slavic peoples. Most were pulled to the United States by the promise of better opportunities and improved quality of life. The dramatic change in the ethnic makeup of this “new wave” of immigrants caused alarm among nativists, racialists, and pro-Protestant interests. One legislative response to this was the Immigration Act of 1917 which created the Asiatic Barred Zone, a vast area of Asia from which no person could immigrate to the U.S. The prohibited areas included most of the Middle East, South Asian countries like Persia and British-ruled India, as well as central Asia and Southeastern Asia.

In another response to the growing number of immigrants arriving from Eastern and Southern European countries, Congress passed the Emergency Immigration Act of 1921, which placed limits on the number of people entering the country based upon prescribed quotas. The law used the 1910 Federal Census to determine existing numbers of foreign-born citizens already living in the U.S. It then required that a number equivalent to only 3% of the already resident population from a certain country could be admitted. Therefore, for example, if 100,000 Bulgarians already lived in the U.S., only 3,000 Bulgarian immigrants could enter annually thereafter. This scheme became known as the National Origins Formula. The goal of federal policy sought to ensure that new waves of immigrants from outside western and central Europe could slowly integrate into American society and so could better embrace American notions of civic virtue, self-government, and productivity.

This law was followed a few years later by the Immigration Act of 1924 which decreased the quota from 3% to 2% and used the 1890 census instead of the 1910 census as the reference point for its quotas. Because Congress chose to utilize the 1890 census, which showed a higher proportion of residents from more desirable European countries like Germany and Great Britain, the law created artificially low quotas for the new immigrants. Furthermore, it placed low caps on arrivals from majority non-white nations, like those in Africa and the Middle East. In the first year of its enactment, the law permitted 51,000 German immigrants, for example, but only 100 from the Arabian Peninsula.

Latent anti-immigrant hostility erupted during both World Wars. Anti-immigrant antagonism has not always been racially motivated. In World War I, German-Americans (even those born in the United States) were subjected to discrimination and harassment for their national background. In some communities, German-Americans were lynched by mobs while others had their businesses boycotted or closed. Americans born in Germany were forced to register with the government as “enemy aliens,” and some states prohibited the use of the German language in school instruction. Most Lutheran churches ceased conducting services in the German language and adopted English instead. During World War II, Japanese-Americans were subjected to even worse treatment and were forced into internment camps for the duration of the war. In February 1942 President Franklin D. Roosevelt issued Executive Order 9066 requiring Japanese-Americans to report for forced relocation to prisoner camps away from the Pacific coast. Fred Korematsu challenged the legality of Roosevelt’s directive, but in Korematsu v. U.S. (1944) the U.S. Supreme Court ruled the internment of Japanese-Americans was constitutional.

The quotas and restrictions of the 1920s remained largely in place until the administration of President Lyndon Johnson, who undertook a sweeping reform project of many of the most important public policy sectors. As part of his reform agenda, Johnson signed into law the Immigration and Nationality Act of 1965, which ended use of the National Origins Formula. Under the new law, 120,000 immigrants were to be admitted annually from Western Hemisphere nations in Latin and South America. 170,000 people per year would be admitted from Asia, Africa, and Europe combined. The reforms of 1965 initiated a substantial change in the ethnic and national origin of immigrants and this accounts for the rapid growth of the non-European population seen today. Instead of a movement of people almost solely from Europe, immigration today is dominated by non-European peoples from all parts of the world. Further, the 1965 reform provided an avenue for immigrants’ families to come to the United States after them, as family immigration is usually not counted in the overall quota. With minor revisions, the standards set forth in the Immigration and Nationality Act of 1965 remain in effect today and still determines from which countries the United States draws its new citizens.