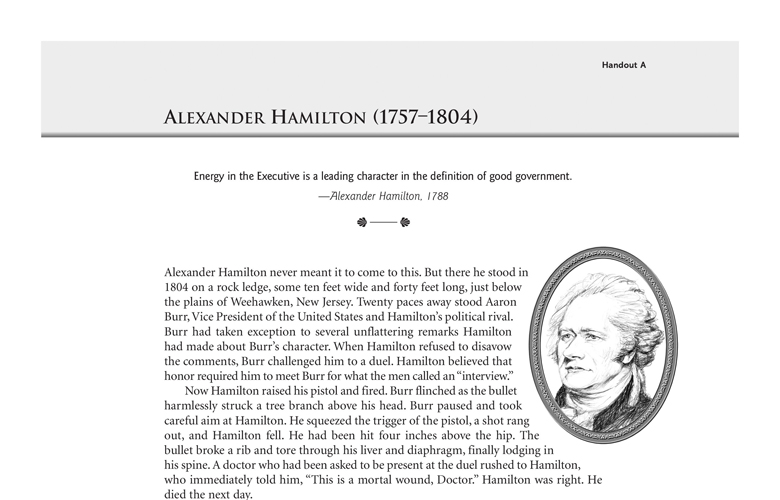 Energy in the Executive is a leading character in the definition of good government. – Alexander Hamilton (1788)

Alexander Hamilton never meant it to come to this. But there he stood in 1804 on a rock ledge, some ten feet wide and forty feet long, just below the plains of Weehawken, New Jersey. Twenty paces away stood Aaron Burr, Vice President of the United States and Hamilton’s political rival. Burr had taken exception to several unflattering remarks Hamilton had made about Burr’s character. When Hamilton refused to disavow the comments, Burr challenged him to a duel. Hamilton believed that honor required him to meet Burr for what the men called an “interview.”

Now Hamilton raised his pistol and fired. Burr flinched as the bullet harmlessly struck a tree branch above his head. Burr paused and took careful aim at Hamilton. He squeezed the trigger of the pistol, a shot rang out, and Hamilton fell. He had been hit four inches above the hip. The bullet broke a rib and tore through his liver and diaphragm, finally lodging in his spine. A doctor who had been asked to be present at the duel rushed to Hamilton, who immediately told him, “This is a mortal wound, Doctor.” Hamilton was right. He died the next day

Alexander Hamilton was born in 1757 on the island of Nevis in the British West Indies. He was the illegitimate son of a poor Scottish merchant and a woman of French descent. Hamilton’s father deserted the family when Hamilton was a toddler. His mother died when he was eleven years old. Hamilton then became an apprentice clerk in a shipping business. His intelligence and ambition impressed a local businessman, who arranged to send the boy to America to receive a formal education.

Hamilton attended a school in Elizabethtown, New Jersey. He completed the two-year course of study in less than a year. Hamilton next considered entering Princeton College in New Jersey. But the president of the college, John Witherspoon, would not agree to the gifted Hamilton’s request to study at his own pace. Hamilton instead chose King’s College in New York. He completed the four-year program in two-and-a-half years. But he never formally graduated. Political events distracted him.

At the age of seventeen, Hamilton became active in New York’s Patriot movement. He wrote two pamphlets and spoke at rallies denouncing British tyranny. After war broke out, Hamilton formed an artillery company. His unit was soon under the command of General George Washington. Washington asked him to join his personal staff and promoted the twenty-year-old to the rank of lieutenant colonel.

An indispensable aide to General Washington, Hamilton did not return to a field command until 1781 during the Yorktown Campaign. Hamilton personally led a bayonet attack against the British entrenchments. Americans won their War of Independence five days later.

In 1780, Hamilton had married Elizabeth Schuyler, daughter of a wealthy and powerful New York family. Two years later, he was admitted to the bar after a mere three months of study of the law. In 1783, he was chosen to represent New York in the Confederation Congress. There he became an ally of Virginian James Madison, who shared Hamilton’s desire for a stronger central government. But frustration with other colleagues caused Hamilton to leave Congress in 1784.

Hamilton became a leading critic of the Articles of Confederation during the 1780s. In 1787, Hamilton was appointed a member of the New York delegation to the Constitutional Convention.

Hamilton played a minor role in the debates at Philadelphia for two reasons. First, he was often absent from the proceedings because of legal business. Second, his extremely nationalist views caused many of his fellow delegates to discount his views. “The gentleman from New York,” summarized William Johnson of Connecticut, is “praised by everybody . . . [but] supported by none.” Hamilton in particular favored the creation of a strong executive branch headed by a single elected president who would serve for life.

The Constitution produced by the Philadelphia convention greatly increased the power of the central government, though not as much as Hamilton had hoped. Nevertheless, he thought it far superior to the Articles of Confederation.

Hamilton took the lead in the campaign for ratification in New York. He joined with Madison and John Jay in writing a series of essays during 1787–1788 supporting the Constitution. These essays, written anonymously under the name “Publius,” became known as The Federalist Papers. Hamilton wrote fifty-two of the eighty-five Federalist essays. They were soon published in book form and sold throughout the country.

Hamilton eagerly accepted the post of secretary of the treasury under President George Washington. He intended to use his position to build a national economic system for America. Hamilton believed that such a system would bind Americans together and create a strong nation.

Hamilton pressed for the establishment of a national bank, funding of the national debt, and assumption of state war debts. He also favored a tax to protect manufacturing, and the creation of a standing army and navy. Hamilton wanted to change the basis of wealth in America from land to money. Money, he held, was the great equalizer. Anyone could acquire it and thereby advance up the economic and social ladder.

Hamilton’s bold plan alarmed many who feared government power. Secretary of State Thomas Jefferson became the leader of the opposition to Hamilton. The first American party system formed around these two men. The Federalists supported the Hamiltonian program. The Democratic-Republicans (or simply, Republicans) worked for its defeat.

In 1795, Hamilton left the Washington administration and resumed his law practice in New York City. While acting as the defense lawyer in People of New York v. Croswell (1803), he made the argument that truth could be used as a legitimate defense in criminal libel cases. Though Hamilton lost the case, this principle was accepted in American law and greatly expanded the freedom of the press.

The year after this case, Vice President Aaron Burr challenged Hamilton to a duel. Burr and Hamilton were political rivals, and Burr had taken offense at remarks attributed to Hamilton. On July 11, 1804, the two men met in the early morning at Weehawken, New Jersey. Hamilton and Burr both fired one shot. Hamilton’s bullet missed its mark, but Burr’s found Hamilton’s hip. Mortally wounded, Hamilton died the next day at the age of forty-seven.