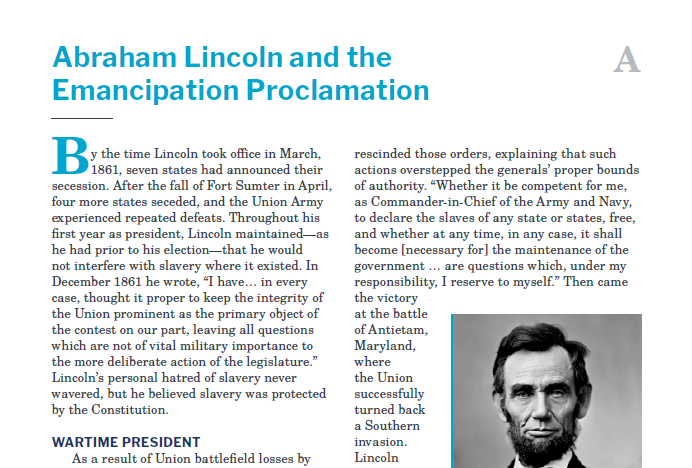 By the time Lincoln took office in March, 1861, seven states had announced their secession. After the fall of Fort Sumter in April, four more states seceded, and the Union Army experienced repeated defeats. Throughout his first year as president, Lincoln maintained—as he had prior to his election—that he would not interfere with slavery where it existed. In December 1861 he wrote, “I have… in every case, thought it proper to keep the integrity of the Union prominent as the primary object of the contest on our part, leaving all questions which are not of vital military importance to the more deliberate action of the legislature.” Lincoln’s personal hatred of slavery never wavered, but he believed slavery was protected by the Constitution.

As a result of Union battlefield losses by July 1862, the President had decided that emancipation was a military necessity. The Secretary of the Navy wrote that Lincoln believed “that we must free the slaves or be ourselves subdued.” Lincoln knew that many thousands of enslaved people were ready to fight for the Union. He wrote, “This is not a question of sentiment or taste, but one of physical force which may be measured …Keep [that force] and you can save the Union. Throw it away, and the Union goes with it.” If freed slaves could reach the Union lines, they could fight for the Union. Furthermore, emancipation would deprive the South of a significant work force, making it more difficult for the rebels to continue the insurrection. Lincoln agreed to await a Union victory before issuing a preliminary emancipation proclamation. Lincoln’s sworn duty was to preserve the Union and the Constitution, not to emancipate the slaves. Twice before, Union generals had issued proclamations freeing slaves in specific fields of conflict. Lincoln had rescinded those orders, explaining that such actions overstepped the generals’ proper bounds of authority. “Whether it be competent for me, as Commander-in-Chief of the Army and Navy, to declare the slaves of any state or states, free, and whether at any time, in any case, it shall become [necessary for] the maintenance of the government … are questions which, under my responsibility, I reserve to myself.” Then came the victory at the battle of Antietam, Maryland, where the Union successfully turned back a Southern invasion. Lincoln decided the time had come.

On September 22, 1862, Lincoln issued his preliminary proclamation, stating that it would take effect on January 1, 1863. Lincoln issued the proclamation in his capacity as Commander in Chief and stated the military necessity of his action. He ordered slaves freed in areas that were in rebellion against the US as of January 1, 1863. He declared that the military would enforce their freedom and receive former slaves as soldiers. Upon signing the Proclamation, Lincoln affirmed that he had never felt “more certain that I was doing right.” He believed, as the Proclamation stated, this action was “warranted by the Constitution upon military necessity.” He concluded that as Commander-in-Chief of the armed forces, he had the power to do it.

There were many in the North who objected to the Proclamation, such as soldiers who had signed on to save the Union, but not to free the slaves. In his letter to a rally at Springfield, Illinois in August 1863, the President clarified why the Emancipation Proclamation was constitutional: “I think the constitution invests its Commander-in-Chief, with the law of war, in time of war.” He continued, “I issued the [emancipation] proclamation on purpose to aid you in saving the Union.”

Lincoln could not enforce emancipation behind enemy lines. However, the Emancipation Proclamation was an essential first step by the US government toward abolition. Two hundred thousand African Americans fought for the North. By giving the war a new moral purpose, Lincoln changed its character. He realized that the time had come to make the nation’s policies align with the promise stated in the Declaration of Independence that “…all men are created equal…”

In the Gettysburg Address (November 1863), Lincoln expressed his hope that a nation “dedicated to the proposition that all men are created equal” would endure. For Lincoln, the meaning of the war had evolved from preserving the Union to giving it a “new birth of freedom.”

The Civil War continued for more than two more years after the Emancipation Proclamation. Finally, however, the Union prevailed and General Robert E. Lee surrendered in April 1865. The hope to which Lincoln referred was preserved.

The great question on which the Founders had been forced to compromise in order to forge a union—what to do about slavery—became the moral cause through which a new generation saved the Union.