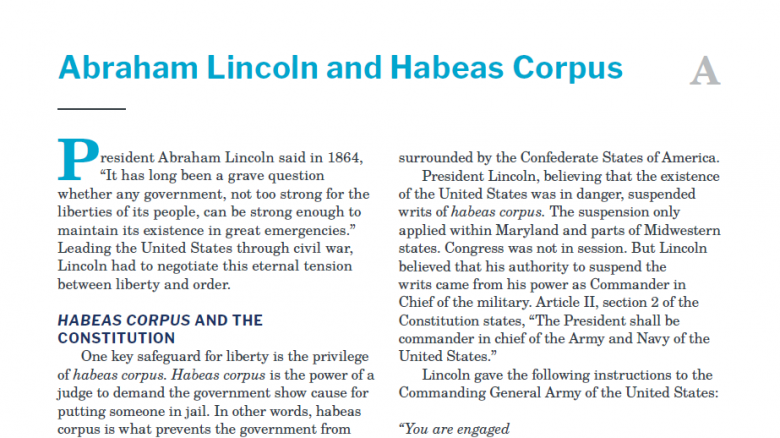 President Abraham Lincoln said in 1864, “It has long been a grave question whether any government, not too strong for the liberties of its people, can be strong enough to maintain its existence in great emergencies.” Leading the United States through civil war, Lincoln had to negotiate this eternal tension between liberty and order.

Habeas Corpus and the Constitution

One key safeguard for liberty is the privilege of habeas corpus. Habeas corpus is the power of a judge to demand the government show cause for putting someone in jail. In other words, habeas corpus is what prevents the government from arresting people who have not committed crimes and locking them up without having to answer to anyone. A writ of habeas corpus requires that the Executive Branch bring the arrested person to court—literally, the phrase is Latin for “you shall have the body to be subjected to examination” (habeas corpus ad subjiciendum). Habeas corpus has also been called “the Great Writ,” and has its roots in the Magna Carta of 1215.

The Founders knew habeas corpus was not only a traditional privilege, but also an essential safeguard of freedom. The Constitution guarantees that “The privilege of the writ of habeas corpus shall not be suspended, unless when in cases of rebellion or invasion the public safety may require it.” This provision appears in Article I, Section 9, which lists limits on the powers of Congress.

Habeas Corpus and the Civil War

By the spring of 1861, South Carolina, Virginia, North Carolina, Tennessee, and the rest of the Confederacy had seceded from the Union. Maryland, which was also a slave state, seemed ready to join the Confederacy as well. If Maryland seceded, the US capital would have been surrounded by the Confederate States of America.

President Lincoln, believing that the existence of the United States was in danger, suspended writs of habeas corpus. The suspension only applied within Maryland and parts of Midwestern states. Congress was not in session. But Lincoln believed that his authority to suspend the writs came from his power as Commander in Chief of the military. Article II, section 2 of the Constitution states, “The President shall be commander in chief of the Army and Navy of the United States.”

Lincoln gave the following instructions to the Commanding General Army of the United States:

“You are engaged in repressing an insurrection against the laws of the United States. If at any point on or in the vicinity of the military line… you find resistance which renders it necessary to suspend the writ of habeas corpus for the public safety, you personally or through the officer in command at the point where resistance occurs are authorized to suspend that writ.”

John Merryman of Maryland was arrested for being “an active secessionist sympathizer.” He was also charged with communication with the Confederates and with treason. Merryman wanted to be removed from prison and charged in open civilian court.

The case, ex parte Merryman (1861), came before Supreme Court Justice Roger Taney, sitting as a circuit court judge. (The Supreme Court was not in session.) Taney’s strongly worded opinion asserted two things. First, only Congress, and not the President, had the power to suspend habeas corpus. Secondly, even if the privilege of the writ of habeas corpus had been suspended by act of Congress, only someone in the military could be held and tried by a military commission.

Taney asserted that the power to suspend habeas corpus was not given to the President, and could not be inferred from any of the President’s listed duties. Instead, the conditions for its suspension were listed in Article I, which deals with the powers of Congress. Taney quoted past Supreme Court Justices who had written that the power to suspend habeas corpus belonged to Congress. Taney believed that Lincoln was violating the Constitution’s provisions, guarantees, and checks and balances. He wrote, “[I]f the authority which the Constitution has confided to the judiciary department and judicial officers[to judge the legality of imprisonments], may thus, upon any pretext or under any circumstances, be usurped by the military power, at its discretion, the people of the United States are no longer living under a government of laws…”

President Lincoln disregarded Taney’s order and continued ordering suspensions in additional areas. He claimed that his oath to preserve, protect, and defend the Constitution required him to take these actions. Speaking before Congress on July 4, 1861, Lincoln asked ironically, “Are all the laws, but one, to go unexecuted, and the government itself go to pieces, lest that one be violated?”

On Sept. 24, 1862, Lincoln suspended habeas corpus throughout the nation. Anyone rebelling against the US would be jailed, denied a jury trial, and tried in military court instead. In March of 1863, two years after Lincoln’s first suspension order, Congress formally suspended habeas corpus with the passage of the Habeas Corpus Act.