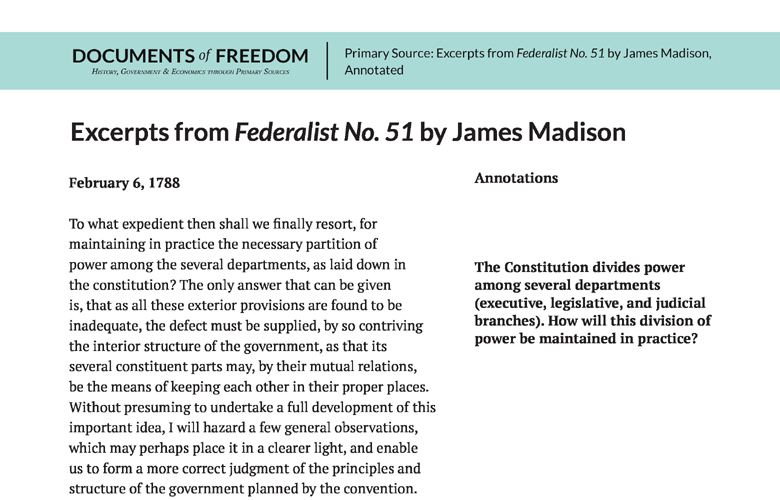 Excerpts from Federalist No. 51 by James Madison

To what expedient then shall we finally resort, for maintaining in practice the necessary partition of power among the several departments, as laid down in the constitution? The only answer that can be given is, that as all these exterior provisions are found to be inadequate, the defect must be supplied, by so contriving the interior structure of the government, as that its several constituent parts may, by their mutual relations, be the means of keeping each other in their proper places.1 Without presuming to undertake a full development of this important idea, I will hazard a few general observations, which may perhaps place it in a clearer light, and enable us to form a more correct judgment of the principles and structure of the government planned by the convention.

In order to lay a due foundation for that separate and distinct exercise of the different powers of government, which, to a certain extent, is admitted on all hands to be essential to the preservation of liberty, it is evident that each department should have a will of its own;2 and consequently should be so constituted, that the members of each should have as little agency as possible in the appointment of the members of the others.3 Were this principle rigorously adhered to, it would require that all the appointments for the supreme executive, legislative, and judiciary magistracies, should be drawn from the same fountain of authority, the people, through channels having no communication whatever with one another…4

It is equally evident, that the members of each department should be as little dependent as possible on those of the others, for the emoluments [salaries] annexed to their offices.5 Were the executive magistrate, or the judges, not independent of the legislature in this particular, their independence in every other, would be merely nominal.

But the great security against a gradual concentration of the several powers in the same department, consists in giving to those who administer each department, the necessary constitutional means, and personal motives, to resist encroachments of the others.6 The provision for defense must in this, as in all other cases, be made commensurate to the danger of attack. Ambition must be made to counteract ambition.7 The interest of the man, must be connected with the constitutional rights of the place. It may be a reflection on human nature, that such devices should be necessary to control the abuses of government. But what is government itself, but the greatest of all reflections on human nature? If men were angels, no government would be necessary.8 If angels were to govern men, neither external nor internal controls on government would be necessary.9 In framing a government which is to be administered by men over men, the great difficulty lies in this: you must first enable the government to control the governed; and in the next place oblige it to control itself.10 A dependence on the people is, no doubt, the primary control on the government;11 but experience has taught mankind the necessity of auxiliary precautions…12

But it is not possible to give to each department an equal power of self-defense.13 In republican government, the legislative authority necessarily predominates.14 The remedy for this inconveniency is, to divide the legislature into different branches; and to render them, by different modes of election, and different principles of action, as little connected with each other, as the nature of their common functions, and their common dependence on the society, will admit. It may even be necessary to guard against dangerous encroachments by still further precautions. As the weight of the legislative authority requires that it should be thus divided, the weakness of the executive may require, on the other hand, that it should be fortified…15

There are moreover two considerations particularly applicable to the federal system of America, which place that system in a very interesting point of view.

First. In a single republic, all the power surrendered by the people, is submitted to the administration of a single government; and the usurpations are guarded against, by a division of the government into distinct and separate departments.16 In the compound republic of America, the power surrendered by the people, is first divided between two distinct governments,17 and then the portion allotted to each subdivided among distinct and separate departments.18 Hence a double security arises to the rights of the people. The different governments will control each other;19 at the same time that each will be controlled by itself.20

Second. It is of great importance in a republic, not only to guard the society against the oppression of its rulers; but to guard one part of the society against the injustice of the other part. Different interests necessarily exist in different classes of citizens.21 If a majority be united by a common interest, the rights of the minority will be insecure.22 There are but two methods of providing against this evil: the one, by creating a will in the community independent of the majority, that is, of the society itself; the other, by comprehending in the society so many separate descriptions of citizens, as will render an unjust combination of a majority of the whole very improbable, if not impracticable.23 The first method prevails in all governments possessing an hereditary or self-appointed authority.24 This, at best, is but a precarious security; because a power independent of the society may as well espouse the unjust views of the major, as the rightful interests of the minor party, and may possibly be turned against both parties.25 The second method will be exemplified in the federal republic of the United States. Whilst all authority in it will be derived from, and dependent on the society, the society itself will be broken into so many parts, interests, and classes of citizens, that the rights of individuals, or of the minority, will be in little danger from interested combinations of the majority.26 In a free government, the security for civil rights must be the same as that for religious rights. It consists in the one case in the multiplicity of interests, and in the justice other, in the multiplicity of sects.27 The degree of security in both cases will depend on the number of interests and sects; and this may be presumed to depend on the extent of country and number of people comprehended under the same government…Justice is the end [goal]of government.28 It is the end of civil society. It ever has been, and ever will be, pursued, until it be obtained, or until liberty be lost in the pursuit. In a society, under the forms of which the stronger faction can readily unite and oppress the weaker, anarchy may as truly be said to reign, as in a state of nature, where the weaker individual is not secured against the violence of the stronger:29 and as, in the latter state, even the stronger individuals are prompted, by the uncertainty of their condition, to submit to a government which may protect the weak, as well as themselves: so, in the former state, will the more powerful factions or parties be gradually induced, by a like motive, to wish for a government which will protect all parties, the weaker as well as the more powerful…In the extended republic of the United States, and among the great variety of interests, parties, and sects, which it embraces, a coalition of a majority of the whole society could seldom take place upon any other principles, than those of justice and the general good…30 It is no less certain than it is important, notwithstanding the contrary opinions which have been entertained, that the larger the society, provided it lie within a practicable sphere, the more duly capable it will be of self-government. And happily for the republican cause, the practicable sphere may be carried to a very great extent, by a judicious modification and mixture of the federal principle.31

1The Constitution divides power among several departments (executive, legislative, and judicial branches). How will this division of power be maintained in practice?

2Everyone agrees that, in order to maintain liberty, government power must be divided.

3Each department (branch) must have as little influence as possible over the selection of the members of the other departments.

4The people themselves are the true source of authority.

5Each branch must have as little influence as possible over the pay that members of the other branches receive.

6The departments must be structured so that each serves as a “watchdog” on the others–keeping an eye on the others to be sure no branch oversteps its proper authority.

7Government is a reflection of human nature. People generally try to gain power.

8If people could be trusted to always be good to one another, government would not be needed.

9Those human beings who are elected to serve in government do not always behave righteously.

11Since the people are the true source of government’s authority, they must be the main “watchdogs” to be sure government officials do not abuse their power.

12Even though the responsibility for keeping government officials within proper limits belongs mostly to the people, additional steps must be taken to prevent abuses of power.

13The additional steps can be found in the structure the Constitution sets up for the branches to defend themselves against one another.

14The legislature must be the main branch of government in a republic (because it is closest to the people themselves.)

15The legislature can be prevented from gaining too much power by dividing it into two chambers, or houses (Senate and House of Representatives.) The two chambers keep an eye on each other.

16The two houses of the legislature are elected in different ways. (This element of the Constitution was later changed by the 17th Amendment.)

17Government power in America is divided between a central (national) government and state governments.

18Power is further divided at each level among several branches.

19State and national levels of government control each other.

20At each level, government officials are responsible for controlling themselves and their proper powers.

21Government must be structured so that the rulers are controlled. It is equally important that classes of people within society be prevented from being unjust toward one another.

22Majorities sometimes vote to violate the rights of people who disagree with them.

23There are two ways to protect the rights of people who disagree with the majority.

24One way to protect the rights of people who disagree with the majority is for a king or dictator to have enough power to protect them.

25This method of protecting rights is not satisfactory because the king or dictator may abuse his power by violating everyone’s rights.

26A second way to protect those with minority opinions is for the society itself to have so many different groups that no one is likely to be in the majority opinion on every issue.

27Freedom itself promotes many diverse opinions and groups.

28The main goal of government is justice (fairness, honesty, righteousness).

29If a government system makes it easy for the majority to unite and oppress those who disagree with them, then no one’s rights are safe.

30In a well-designed system of government, the majority will submit to a government that protects the weak because they know that someday they themselves may disagree with the majority.

31In a large, free republic, there are so many issues, groups, and opinions that the main principle on which they unite is that everyone’s rights should be secure.