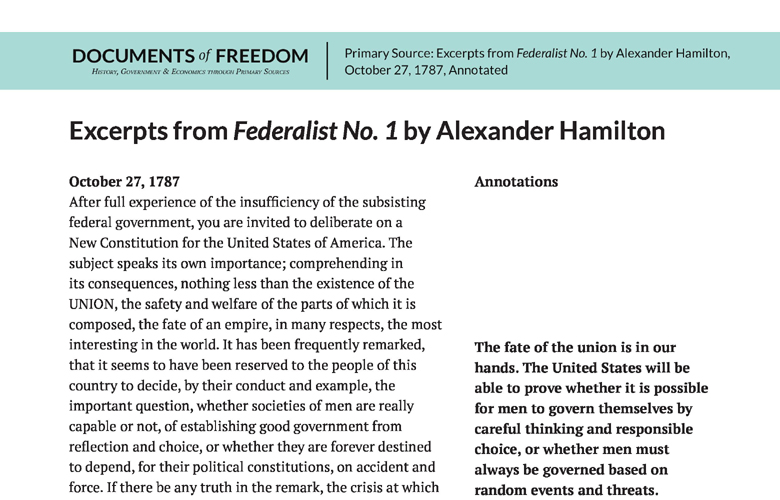 Excerpts from Federalist No. 1 by Alexander Hamilton

After full experience of the insufficiency of the subsisting federal government, you are invited to deliberate on a New Constitution for the United States of America. The subject speaks its own importance; comprehending in its consequences, nothing less than the existence of the UNION, the safety and welfare of the parts of which it is composed, the fate of an empire, in many respects, the most interesting in the world. It has been frequently remarked, that it seems to have been reserved to the people of this country to decide, by their conduct and example, the important question, whether societies of men are really capable or not, of establishing good government from reflection and choice, or whether they are forever destined to depend, for their political constitutions, on accident and force. If there be any truth in the remark, the crisis at which we are arrived may, with propriety, be regarded as the period when that decision is to be made; and a wrong election of the part we shall act may, in this view, deserve to be considered as the general misfortune of mankind…1

And yet, just as these sentiments must appear to candid men, we have already sufficient indications, that it will happen in this as in all former cases of great national discussion. A torrent of angry and malignant passions will be let loose. To judge from the conduct of the opposite parties, we shall be led to conclude, that they will mutually hope to evince the justness of their opinions, and to increase the number of their converts, by the loudness of their declamations, and by the bitterness of their invectives. An enlightened zeal for the energy and efficiency of government, will be stigmatized as the offspring of a temper fond of power and hostile to the principles of liberty…2 On the other hand, it will be equally forgotten, that the vigor of government is essential to the security of liberty; that, in the contemplation of a sound and well informed judgment, their interests can never be separated; and that a dangerous ambition more often lurks behind the specious mask of zeal for the rights of the people, than under the forbidding appearances of zeal for the firmness and efficiency of government.3 History will teach us, that the former has been found a much more certain road to the introduction of despotism, than the latter, and that of those men who have overturned the liberties of republics, the greatest number have begun their career, by paying an obsequious court to the people…commencing demagogues, and ending tyrants.4

In the course of the preceding observations, it has been my aim, my fellow-citizens, to put you upon your guard against all attempts, from whatever quarter, to influence your decision in a matter of the utmost moment to your welfare, by any impressions, other than those which may result from the evidence of truth… I own to you, that, after having given it an attentive consideration, I am clearly of opinion it is your interest to adopt it [the Constitution]. I am convinced, that this is the safest course for your liberty, your dignity, and your happiness… I frankly acknowledge to you my convictions, and I will freely lay before you the reasons on which they are founded…5

I propose, in a series of papers, to discuss the following interesting particulars…The utility of the UNION to your political prosperity…The insufficiency of the present confederation to preserve that Union…The necessity of a government at least equally energetic with the one proposed, to the attainment of this object…The conformity of the proposed constitution to the true principles of republican government…Its analogy to your own state constitution…and lastly, The additional security, which its adoption will afford to the preservation of that species of government, to liberty and to property.

In the progress of this discussion, I shall endeavor to give a satisfactory answer to all the objections which shall have made their appearance, that may seem to have any claim to attention.

It may perhaps be thought superfluous to offer arguments to prove the utility of the UNION, a point, no doubt, deeply engraved on the hearts of the great body of the people in every state, and one which, it may be imagined, has no adversaries. But the fact, is that we already hear it whispered in the private circles of those who oppose the new constitution, that the Thirteen States are of too great extent for any general system, and that we must of necessity resort to separate confederacies of distinct portions of the whole. This doctrine will, in all probability, be gradually propagated, till it has votaries enough to countenance its open avowal. For nothing can be more evident, to those who are able to take an enlarged view of the subject, than the alternative of an adoption of the constitution, or a dismemberment of the Union. It may, therefore, be essential to examine particularly the advantages of that Union, the certain evils, and so the probable dangers, to which every state will be exposed from its dissolution. This shall accordingly be done.6

1The fate of the union is in our hands. The United States will be able to prove whether it is possible for men to govern themselves by careful thinking and responsible choice, or whether men must always be governed based on random events and threats.

2Those who oppose the Constitution try to convince people that its supporters are enemies of liberty.

3Energy and efficiency in government (such as that outlined in the Constitution) are essential in preserving liberty.

4History teaches that popular leaders who claim to be concerned about liberty may actually end up as greater threats to liberty than would be found in a framework for vigorous but limited government.

5Publius (the pen name taken by Alexander Hamilton, James Madison, and John Jay) will outline in a series of essays the reasons why your liberty and happiness are safer if you adopt the Constitution than if it is not ratified.

6Those who argue that the United States is too large a country for a national government, and that we are better off as a group of loosely connected confederacies, are wrong. We must either adopt this Constitution or the union of states will be destroyed.