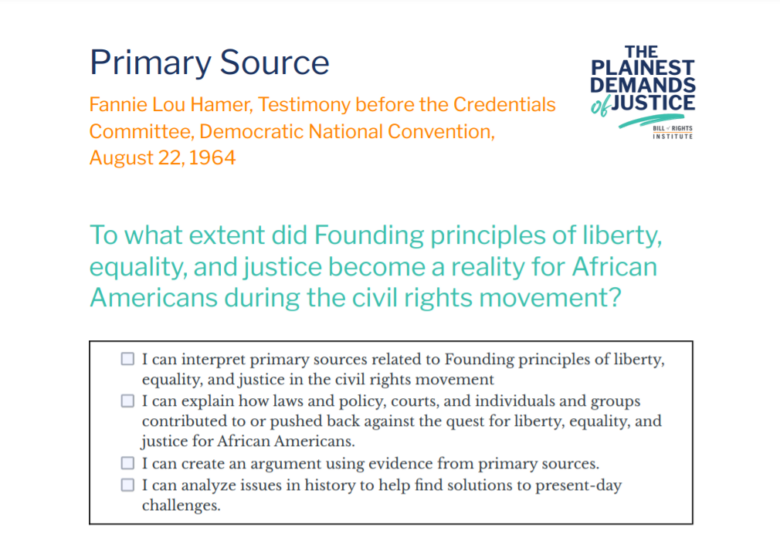 Fannie Lou Hamer grew up picking cotton and cutting corn in a sharecropping family, attending school only through the sixth grade. She married a fellow sharecropper, and the two scratched out a living doing hard, menial work on a plantation near Ruleville, Mississippi. In August 1962, Hamer attended a SNCC meeting about voting and vowed to register to vote. The next day, she and her husband lost their jobs as sharecroppers. Hamer’s ensuing attempts to register to vote resulted in violence. In June 1963, she was brutally beaten in a jail in Winona, Mississippi. After recovering, she traveled across the United States to tell her story and raise money for SNCC. In August 1964, Hamer gave the following speech at the Democratic National Convention (DNC). She had co-founded the Mississippi Freedom Democratic Party (MFDP) as an alternative delegation to the official all-white Democratic one. The MFDP was not seated in the DNC, however. In her speech, Hamer related what had happened when she and a group of African Americans tried to register to vote in June 1963.

[On] June the 9th, 1963, I had attended a voter registration workshop; was returning back to Mississippi . . . As soon as I was seated on the bus, I saw when they [state highway patrol men] began to get the five people in a highway patrolman’s car. I stepped off of the bus to see what was happening and somebody screamed from the car that the five workers was in and said, “Get that one there.” When I went to get in the car, when the man told me I was under arrest, he kicked me.

I was carried to the county jail and put in the booking room. They left some of the people in the booking room and began to place us in cells. I was placed in a cell with a young woman called Miss Ivesta Simpson. After I was placed in the cell I began to hear sounds of licks [blows from a whip] and screams, I could hear the sounds of licks and horrible screams. And I could hear somebody say, “Can you say, ‘yes, sir,’ nigger? Can you say ‘yes, sir’?”

And they would say other horrible names.

She said, “I don’t know you well enough.” They beat her, I don’t know how long. And after a while she began to pray, and asked God to have mercy on those people . . .

All of this is on account of we want to register, to become first-class citizens. And if the [Mississippi] Freedom Democratic Party is not seated now, I question America. Is this America, the land of the free and the home of the brave, where we have to sleep with our telephones off the hooks because our lives be threatened daily, because we want to live as decent human beings, in America?