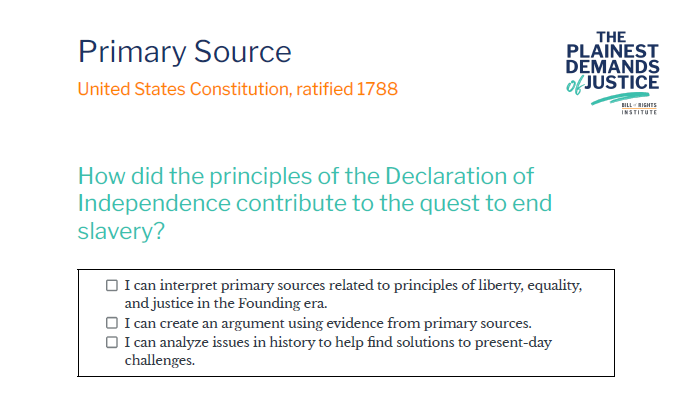 The delegates to the Constitutional Convention held in Philadelphia from May to September 1787 established a system of republican government that is emulated throughout the world. The final document they created made no mention of the words slave, race, or color, yet the debate over the institution of slavery exposed divisions among the delegates. Two of the most contentious issues at the convention—counting state populations for representation in Congress and continuing the international slave trade—sparked intense discussion. North Carolina, South Carolina, and Georgia refused to commit to a document without some guarantees of slavery. After 17 weeks of deliberation, the Philadelphia convention approved a draft of the Constitution to submit to popular conventions in the states for ratification.

The Constitution of the United States

Preamble: We the People of the United States, in Order to form a more perfect Union, establish Justice, insure domestic Tranquility, provide for the common defence, promote the general Welfare, and secure the Blessings of Liberty to ourselves and our Posterity [future generations], do ordain [decree or command] and establish this Constitution for the United States of America.

Article I, Section 2. [Three-Fifths Clause]
….Representatives and direct Taxes shall be apportioned [allocated] among the several States which may be included within this Union, according to their respective Numbers, which shall be determined by adding to the whole Number of free Persons, including those bound to Service for a Term of Years, and excluding Indians not taxed, three fifths of all other Persons.

Article I, Section 9. [Slave Trade Clause]
…
The Migration or Importation of such Persons as any of the States now existing shall think proper to admit, shall not be prohibited by the Congress prior to the Year one thousand eight hundred and eight, but a Tax or duty may be imposed on such Importation, not exceeding ten dollars for each Person.