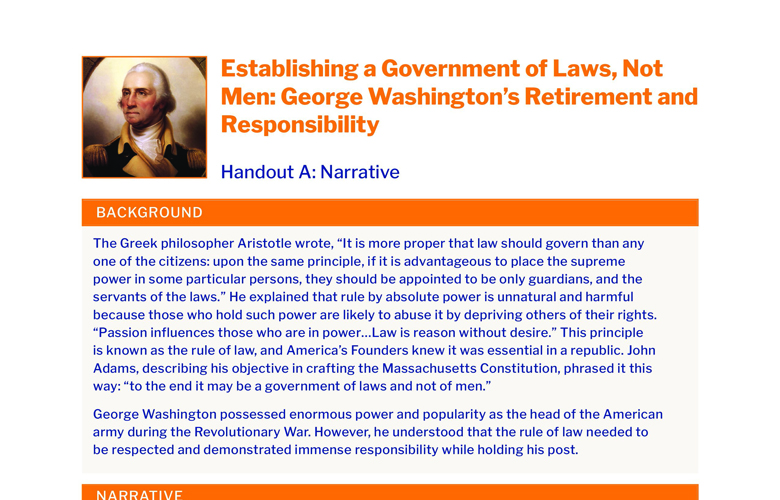 The Greek philosopher Aristotle wrote, “It is more proper that law should govern than any one of the citizens: upon the same principle, if it is advantageous to place the supreme power in some particular persons, they should be appointed to be only guardians, and the servants of the laws.” He explained that rule by absolute power is unnatural and harmful because those who hold such power are likely to abuse it by depriving others of their rights. “Passion influences those who are in power…Law is reason without desire.” This principle is known as the rule of law, and America’s Founders knew it was essential in a republic. John Adams, describing his objective in crafting the Massachusetts Constitution, phrased it this way: “to the end it may be a government of laws and not of men.”

George Washington possessed enormous power and popularity as the head of the American army during the Revolutionary War. However, he understood that the rule of law needed to be respected and demonstrated immense responsibility while holding his post.

The Americans won the Revolutionary War in October 1781, with the victory at the Battle of Yorktown.

In November 1782, peace commissioners Benjamin Franklin, John Adams, and John Jay negotiated a preliminary peace treaty with the British in Paris. In September 1783, the commissioners signed the final treaty, and the British Army in America evacuated when word arrived in November. America was now an independent country, but the Founders needed to establish what principles the country would be built upon.

In early 1783, after eight years away from his family while commanding the army, Washington yearned for retirement to Mount Vernon. He often paraphrased the Book of Micah in his letters to describe his feelings. He once wrote, “It being my anxious desire to quit the walks of public life, and under the shadow of my own vine, and my own fig-tree, to seek those enjoyments, and that relaxation, which a mind that has been constantly upon the stretch for more than eight years, stands so much in need of.”

In early 1783, Washington suppressed a rebellion led by his own officers called the Newburgh Conspiracy. These men, frustrated that Congress failed to pay soldiers, sought to overthrow the colonial government. Although Washington ended the conspiracy, he was sympathetic to the pleas of his army. He had grappled with Congress to supply his army for years and now begged Congress to fulfill its obligations, to no avail. Washington was not surprised that spring when many soldiers and officers began to leave.

Still, Washington sought to encourage his fellow Americans to build the new nation on certain principles, which included a commitment to republican government, unity, virtuous character, and service. In June, he issued a letter to the states and the American people, calling for “an indissoluble Union of the states” and to cultivate a “brotherly affection and love for one another, for their fellow citizens of the United States.” Washington saw it as his duty to build a lasting republic since he and his men had sacrificed so much to win independence.

After a period of negotiations, the treaty arrived. On November 2, 1783, Washington thanked the Revolutionary War soldiers for their service. He attributed the American victory to their character: “The…unparalleled perseverance of the armies of the United States, through almost every possible suffering and discouragement for the space of eight long years, was little short of a standing miracle.” He again advanced the idea of national unity and character, impressed that “men who came from the different parts of the continent…would instantly become but one patriotic band of brothers.”

Later that month, Washington marched the remnants of the army into New York to cheering crowds. He said a farewell to his officers at Fraunces Tavern and then departed for Annapolis, Maryland, where Congress was then assembled. On December 23, Washington appeared before Congress to surrender his military commission, saying, “Happy in the confirmation of our independence and sovereignty, and pleased with the opportunity afforded the United States of becoming a respectable nation, I resign with satisfaction the appointment I accepted with diffidence.”

Washington’s surrender of his commission was unprecedented and established that in the United States, the civilian republican government superseded the military. Washington stated, “Having now finished the work assigned me, I retire from the great theater of action; and bidding an affectionate farewell to this august body under whose orders I have so long acted, I here offer my commission and take my leave of all the employments of public life.”

Washington handed his 1775 commission to the president of Congress, then traveled to Mount Vernon on Christmas Eve to celebrate the holiday with his wife, Martha. British King George III reportedly said that if Washington voluntarily surrendered power, he “will be the greatest man in the world.” Washington understood he had a responsibility to both his countrymen and future generations to respect the rule of law. He did not fail them.