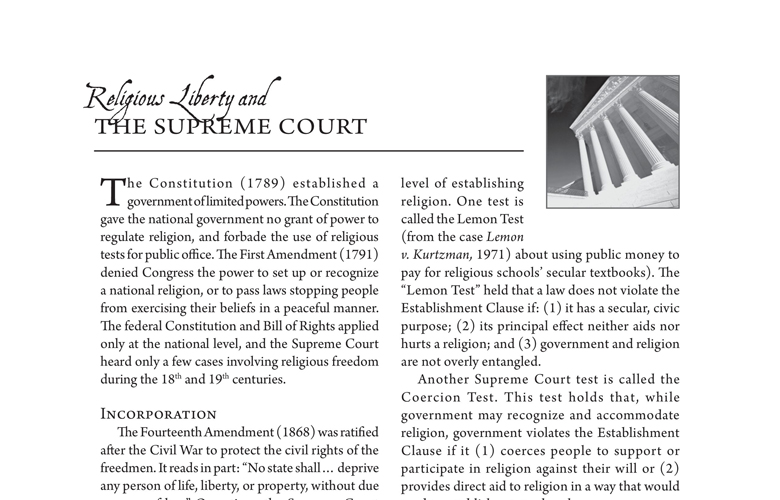 Religious Liberty and The Supreme Court

The Constitution (1789) established a government of limited powers. The Constitution gave the national government no grant of power to regulate religion, and forbade the use of religious tests for public office. The First Amendment (1791) denied Congress the power to set up or recognize a national religion, or to pass laws stopping people from exercising their beliefs in a peaceful manner. The federal Constitution and Bill of Rights applied only at the national level, and the Supreme Court heard only a few cases involving religious freedom during the 18th and 19th centuries.

The Fourteenth Amendment (1868) was ratified after the Civil War to protect the civil rights of the freedmen. It reads in part: “No state shall… deprive any person of life, liberty, or property, without due process of law.” Over time, the Supreme Court began interpreting this clause to mean that some Bill of Rights protections would apply to state governments. State governments could not abridge rights that the Court has found are “fundamental to ordered liberty.” Applying Bill of Rights protections to state and local governments is called the doctrine of incorporation.

In the 1940 case of Cantwell v. Connecticut, the Supreme Court applied the Free Exercise Clause of the First Amendment to the states. Seven years later, in Everson v. Board of Education, the Court did the same with the Establishment Clause. The application of the First Amendment’s protection of religion to state and local governments set the stage for an increasing number of conflicts over the constitutional relationship between religion and government.

Through a number of landmark cases, the Supreme Court has developed tests to decide if government action on religion rises to the level of establishing religion. One test is called the Lemon Test (from the case Lemon v. Kurtzman, 1971) about using public money to pay for religious schools’ secular textbooks). The “Lemon Test” held that a law does not violate the Establishment Clause if: (1) it has a secular, civic purpose; (2) its principal effect neither aids nor hurts a religion; and (3) government and religion are not overly entangled.

Another Supreme Court test is called the Coercion Test. This test holds that, while government may recognize and accommodate religion, government violates the Establishment Clause if it (1) coerces people to support or participate in religion against their will or (2) provides direct aid to religion in a way that would tend to establish a state church.

The Endorsement Test allows government involvement with religious activity as long as such involvement is “generally understood not to endorse” a religious message or teaching. The activity also cannot send a message to nonbelievers that they are not full members of the political community.

Some Court observers note that the Court is moving towards “accommodation” or “nonpreferentialism” with respect to religion. For example, government-funded tuition vouchers may give indirect aid to religious private schools as well as non-religious schools, as long as true private choice exists.

Public Schools and the Establishment Clause

Because public schools are funded by government, they are often the focus of Establishment Clause conflicts. The Supreme Court has consistently held that public school officials must remain neutral among religions, as well as between religion and non-religion. The Court has also consistently upheld the religious liberty rights of individual students in public schools.

Public schools cannot force students to pray or require them to take part in religious activities in school. In 1962, the Court ruled in Engel v. Vitale that a state could not authorize a voluntary, nondenominational prayer for recitation at the start of each school day. State laws requiring display of the Ten Commandments in classrooms were struck down in Stone v. Graham (1980). In Wallace v. Jaffree (1985), the Court invalidated a state law setting aside a brief period for “meditation or voluntary prayer.”

The Court has generally held that state-sponsored religious activity at school-sponsored events violates the Establishment Clause as well. The Court ruled against clergy-led prayer at middle school graduation ceremonies in Lee v. Weisman (1992). In 2000, the Court held that officials could not allow high school students to vote on a prayer to be read at athletic events in Santa Fe Independent School District v. Doe.

The Court has also made clear that students have religious liberty rights in public schools. The Court makes the distinction between government (or public school) speech endorsing religion—which the Establishment clause prohibits—and private (student) speech endorsing religion, which the free-speech and free-exercise clauses protect. Religious activities at school must be truly student-initiated and student led, and within the school’s guidelines for good order and discipline.

Students have the right to pray alone or in groups or to discuss their faith with classmates, as long as they aren’t disruptive or coercive. They may express their religious views in class assignments or discussions, as long as it is relevant to the subject under consideration and meets the requirements of the assignment. But students may not force others to participate in religious exercises.

Schools which allow any extra-curricular clubs may not discriminate against certain student clubs because they have a religious purpose. The Court held that public secondary schools must give voluntary religious groups the same access to facilities that other extracurricular groups enjoy (Board of Education of Westside Community Schools v. Mergens, 1990).

As long as government is directly involved in education, schools will continue to be the site of Establishment Clause conflicts. The debate about the constitutional relationship between religion and government continues to challenge Americans today. Understanding the history and interpretations of the First Amendment is critical to an informed discussion.