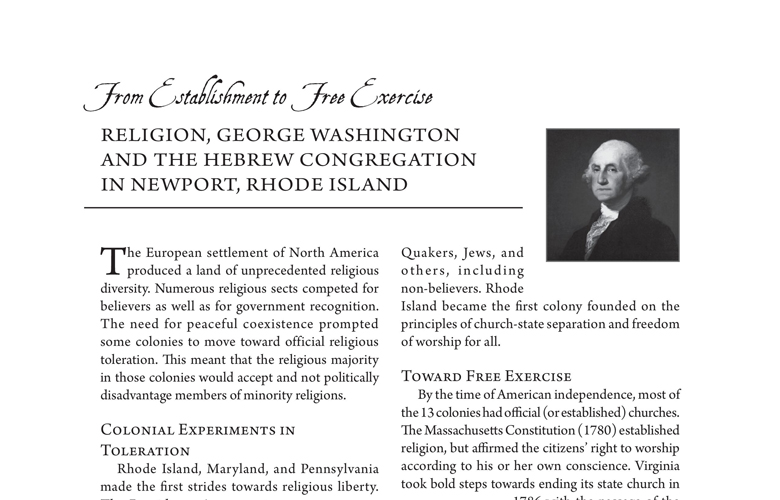 From Establishment to Free Exercise: Religion, George Washington, and the Hebrew Congregation in Newport, Rhode Island

The European settlement of North America produced a land of unprecedented religious diversity. Numerous religious sects competed for believers as well as for government recognition. The need for peaceful coexistence prompted some colonies to move toward official religious toleration. This meant that the religious majority in those colonies would accept and not politically disadvantage members of minority religions.

Rhode Island, Maryland, and Pennsylvania made the first strides towards religious liberty. The Providence Agreement (1637) limited the authority of government to matters “only in civil things,” which leads some scholars to credit the colonial settlement of Providence, in what is now Rhode Island, with America’s first legal protection of religious matters. The Maryland Assembly passed the Act Concerning Religion(also known as the Maryland Toleration Act) in 1649. This law protected Roman Catholics from Protestant discrimination, but was soon repealed. Pennsylvania was established in 1681 as a refuge for Christians seeking “freedom of conscience,” though only Christians could hold public office.

Rhode Island was chartered in 1663 with no established faith and full free exercise. The colony was a “haven for the cause of conscience” that welcomed people not tolerated elsewhere—Quakers, Jews, and others, including non-believers. Rhode Island became the first colony founded on the principles of church-state separation and freedom of worship for all.

By the time of American independence, most of the 13 colonies had official (or established) churches. The Massachusetts Constitution (1780) established religion, but affirmed the citizens’ right to worship according to his or her own conscience. Virginia took bold steps towards ending its state church in 1786 with the passage of the Virginia Statute for Religious Freedom.
The idea that religion and government should be separate reached the national level as well. The U.S. Constitution, ratified in 1789, was not based on a religion and required that “no religious test shall ever be required as a qualification to any office or public trust under the United States.” (The Constitution served to limit only the national government; state governments could impose religious tests for public office.)

Rhode Island became the first colony founded on the principles of church-state separation and freedom of worship for all.

Almost immediately after the national Constitution was ratified, Congress set to work on a list of amendments. It was in part the proposed amendments that brought President George Washington, along with Secretary of State Thomas Jefferson and others, to the city of Newport, Rhode Island, in August, 1790.

Washington sought to gather support for the ratification of the Bill of Rights, which included protections for religious liberty. The First Amend men tread in part, “Congress shall make no law respecting an establishment of religion, or prohibiting the free exercise thereof.” Throngs of Newport residents came to hear the new President speak, including leaders of the city’s many religious denominations.

Amidst the crowd in Newport were members of the city’s Jewish congregation, Jeshu at Israel Synagogue, today known as Touro Synagogue. The synagogue’s Warden, Moses Seixas, wrote a letter to Washington on behalf of the congregation. Seixas’s letter expressed the congregation’s joy at having Washington as a leader, and their delight in living under a Constitution that they were confident had finally afforded true religious liberty to all.
Four days after leaving Newport, Washington wrote a reply to the congregation. Washington’s reply went beyond a customary acknowledgement of their letter. He not only echoed the congregation’s belief that the United States was now a nation that gave “to bigotry no sanction, [and] to persecution no assistance,” but continued on to make a clear distinction between the America of old and the America of new: the United States had moved from mere religious toleration to true religious liberty. (Religious toleration assumes that government can either give or take away the “privilege” of exercising one’s religion. By contrast, religious liberty is an inalienable right that cannot betaken away by the civil state.)
Washington wrote:

“All possess alike liberty of conscience and immunities of citizenship. It is now no more that toleration is spoken of as if it were the indulgence of one class of people that another enjoyed the exercise of their inherent natural rights.…”

His sentiments echoed the ideas of the Declaration of Independence; namely, that all were born with inalienable rights and the liberty to exercise them freely.

Washington’s letter to the Hebrew Congregation in Newport, Rhode Island has come to be regarded as one of the most important pronouncements of a new philosophy regarding religion: government exists in part for the protection of religious liberty and matters of conscience.

The national government did not have the power to force states to disestablish their churches. All the states ended their establishments by 1833.