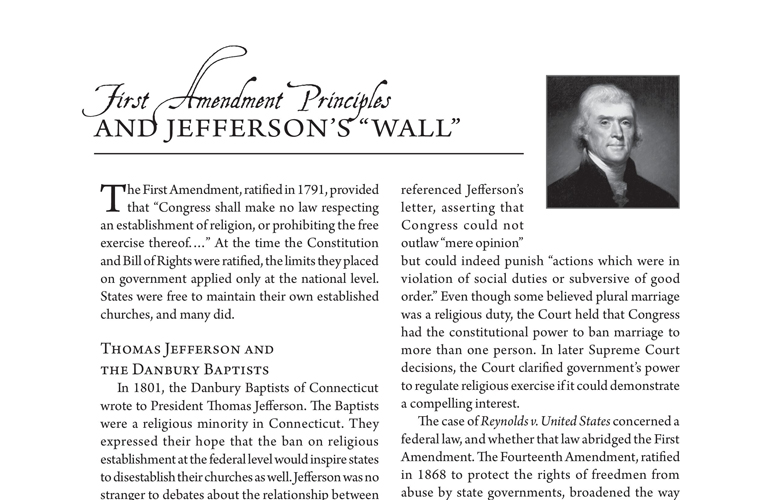 The First Amendment, ratified in 1791, provided that “Congress shall make no law respecting an establishment of religion, or prohibiting the free exercise thereof.…” At the time the Constitution and Bill of Rights were ratified, the limits they placed on government applied only at the national level. States were free to maintain their own established churches, and many did.

Thomas Jefferson and the Danbury Baptists

In 1801, the Danbury Baptists of Connecticut wrote to President Thomas Jefferson. The Baptists were a religious minority in Connecticut. They expressed their hope that the ban on religious establishment at the federal level would inspire states to disestablish their churches as well. Jefferson was no stranger to debates about the relationship between religion and government. Years before, he had led his home state of Virginia in the process of ending its official church. As President, Jefferson had refused to proclaim national days of prayer or thanksgiving, something that both of his predecessors, George Washington and John Adams, had done.

In his response to the Danbury Baptists, Jefferson began by asserting his view of religion as a matter “ between Man & his God.” Jefferson drew a distinction between actions and opinions, saying the government had no authority over the latter. The President continued by explaining his view of the meaning of the First Amendment. The First Amendment had built a “wall of separation between Church and State,” he wrote. Jefferson did not comment on any state matters.

In 1878, the Supreme Court first quoted Jefferson’s letter as a way of interpreting the Free Exercise Clause of the First Amendment. In this case, Reynolds v. United States, the Court upheld a federal law banning bigamy (plural marriage). The Court referenced Jefferson’s letter, asserting that Congress could not outlaw “mere opinion” but could indeed punish “actions which were in violation of social duties or subversive of good order.” Even though some believed plural marriage was a religious duty, the Court held that Congress had the constitutional power to ban marriage to more than one person. In later Supreme Court decisions, the Court clarified government’s power to regulate religious exercise if it could demonstrate a compelling interest.

The case of Reynolds v. United States concerned a federal law, and whether that law abridged the First Amendment. The Fourteenth Amendment, ratified in 1868 to protect the rights of freedmen from abuse by state governments, broadened the way the Bill of Rights would be applied. The Fourteenth Amendment contains a clause preventing states from infringing on the life, liberty, or property of individuals without due process of law. The Due Process Clause, as it is known, has been used by the Supreme Court to apply (or “incorporate”) most Bill of Rights provisions to the states.

The Supreme Court applied the First Amendment’s ban on government establishment of religion to the states in Everson v. Board of Education (1947). In this case, the Court held that New Jersey did not violate the Establishment Clause by paying back the parents of Catholic school students for the cost of busing their children to school. Quoting Thomas Jefferson, the majority wrote: “In the words of Jefferson, the clause against establishment of religion by law was intended to erect ‘a wall of separation between church and State.’” The Court continued, reasoning that the First Amendment “requires the state to be neutral in its relations with groups of religious believers and non-believers; it does not require the state to be their adversary. State power is no more to be used so as to handicap religions than it is to favor them.” Since the law was part of a general program to get all children safely to school, the Court found no First Amendment violation.

The Court used the “wall” metaphor in another landmark ruling—this time to strike down a state law. In Engel v. Vitale (1962), the Court held that New York could not constitutionally require public school students to begin each day by reciting a state-composed prayer. The Court again used Jefferson’s language, saying that “the State’s use of the Regents’ prayer in its public school system breaches the constitutional wall of separation between Church and State.” The Court reasoned that the First Amendment’s “ prohibition against laws respecting an establishment of religion must at least mean that, in this country, it is no part of the business of government to compose official prayers for any group of the American people to recite as a part of a religious program carried on by government.”

Jefferson’s phrase “wall of separation between church and state” is not in the Constitution or Bill of Rights but has become so widely known that it is sometimes mistaken for the First Amendment. The Supreme Court has held that Jefferson’s writings “may be accepted almost as an authoritative declaration of the scope and effect of the [First] Amendment.” Jefferson was a leading Founder and exchanged letters with James Madison—his partner in ending the religious establishment in Virginia—on the subject of a bill of rights. In Reynolds v. United States, the Court noted that the letter came from “an acknowledged leader of the advocates” of the First Amendment.

Some scholars question the claim that Jefferson’s letter is authoritative. Jefferson did not attend the Constitutional Convention and played no formal role in drafting or debating the First Amendment. Chief Justice William Rehnquist, dissenting in Wallace v. Jaffree (1985), argued that judges should not use the metaphor as a guide: “The greatest injury of the ‘wall’ notion is its mischievous diversion of judges from the actual intentions of the drafters of the Bill of Rights.” Rehnquist points to what he believes are confusing and contradictory rulings that have proven the metaphor is “useless as a guide to judging. It should be frankly and explicitly abandoned.”

The debate about the “wall”—whether it exists and, if so, where it should stand and how high it should be—continues to this day.