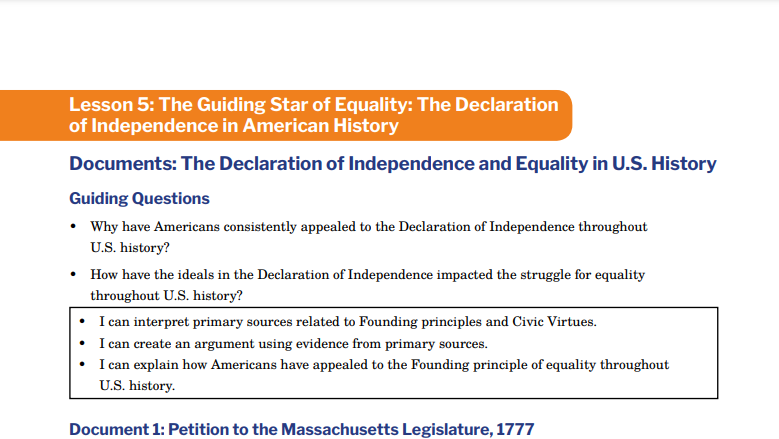 Documents: The Declaration of Independence and Equality in U.S. History

Document 1: Petition to the Massachusetts Legislature, 1777

Introduction: Petitioning, or officially bringing complaints or requests to the government, was a common tradition in Great Britain that carried over to the American colonies. The colonists repeatedly petitioned the king and Parliament during the 1760s and 1770s. Enslaved persons also petitioned legislatures for their freedom. In 1777, Prince Hall and seven other Black men brought their own petition to the Massachusetts Council and the House of Representatives.

The petition of A Great Number of Blackes detained in a State of slavery … sheweth [shows] that your Petitioners apprehend [understand] that they have in Common with all other men a Natural and Unalienable [impossible to take away] Right to that freedom which the Gr[e]at Parent of the Universe that Bestowed [gave] equally on all menkind and which they have Never forfeited [given up] … but that wher [were] Unjustly Dragged … from the Embraces of their tender Parents … in violation of Laws of Nature … and in Defiance of all the tender feelings of humanity Brough[t] here Either to Be sold like Beast of burthen [burden] & Like them Condemned to Slavery for Life.

Document 2: Declaration of Sentiments and Resolutions, 1848

Introduction: In 1840, abolitionists from several countries met in London at the World Anti-Slavery Convention. Two American abolitionists, Elizabeth Cady Stanton and Lucretia Mott, were not allowed to attend the meeting because they were women. Outraged, the two women vowed to hold a women’s rights convention in the United States. That meeting took place eight years later in upstate New York, at the Seneca Falls Convention. Three hundred women and men attended and signed their name to the Declaration of Sentiments and Resolutions, an excerpt of which appears below.

We hold these truths to be self-evident: that all men and women are created equal; that they are endowed by their Creator with certain inalienable [impossible to take away] rights; that among these are life, liberty, and the pursuit of happiness…

The history of mankind is a history of repeated injuries and usurpations [violations] on the part of man toward woman, having in direct object [goal] the establishment of an absolute tyranny over her.

Introduction: The American Civil War began in April 1861, but it was in September 1862 that President Abraham Lincoln issued a preliminary Emancipation Proclamation. That document freed slaves in states then in rebellion. Despite the moral purpose of the Proclamation, the Civil War continued. In July 1863, the Union Army won the Battle of Gettysburg but with a staggering loss of life. To provide a final resting place for many of these honored dead, a new cemetery was created in Gettysburg and dedicated in November 1863. President Abraham Lincoln accepted an invitation to speak at the event. In his speech he offered a reflection on the battle, the greater war, and the principles that shape American ideals.

Four score and seven years [87 years] ago our fathers brought forth on this continent, a new nation, conceived [created] in Liberty, and dedicated to the proposition [idea] that all men are created equal. Now we are engaged in a great civil war, testing whether that nation, or any nation so conceived and so dedicated, can long endure. We are met on a great battle-field of that war. We have come to dedicate a portion of that field, as a final resting place for those who here gave their lives that that nation might live. …

We here highly resolve that these dead shall not have died in vain [for no reason]—that this nation, under God, shall have a new birth of freedom—and that government of the people, by the people, for the people, shall not perish [pass away] from the earth.

Introduction: World War II began in Europe in September 1939, and by May 1940, Great Britain stood alone against Nazi Germany. The United States was officially neutral, but President Franklin Roosevelt sought ways to help the British. In the summer of 1941, British Prime Minister Winston Churchill met with Roosevelt aboard a warship off the coast of Canada. Churchill hoped to convince the United States to join the war. Roosevelt refused to discuss this, but the two leaders did jointly release the Atlantic Charter. This declaration of principles expressed the common ideals that the two countries stood for.

The President of the United States of America and the Prime Minister, Mr. Churchill, representing His Majesty’s Government in the United Kingdom, being met together, deem it right to make known certain common principles in the national policies of their respective countries on which they base their hopes for a better future for the world.… [T]hey respect the right of all peoples to choose the form of government under which they will live; and they wish to see sovereign [possessing ultimate power] rights and self-government restored to those who have been forcibly deprived of them.

Introduction: The year 1963 marked the 100th anniversary of the Emancipation Proclamation, and the campaign for civil rights for Black Americans continued in earnest. The March on Washington for Jobs and Freedom took place on August 28, 1963, and drew a record turnout of 250,000 protesters. Dr. Martin Luther King, Jr., delivered his “I Have a Dream” speech on the steps of the Lincoln Memorial as a dramatic ending to the march. In his speech, King pleaded that the promise of equal civil and economic rights for Black Americans be made a reality.

When the architects of our republic wrote the magnificent words of the Constitution and the Declaration of Independence, they were signing a promissory note [a signed promise to pay money to someone] to which every American was to fall heir [to inherit]. This note was a promise that all men, yes, black men as well as white men, would be guaranteed the unalienable [impossible to take away] rights of life, liberty, and the pursuit of happiness…

Let us not wallow in the valley of despair, I say to you today, my friends. So even though we face the difficulties of today and tomorrow, I still have a dream. It is a dream deeply rooted in the American dream.

I have a dream that one day this nation will rise up and live out the true meaning of its creed: “We hold these truths to be self-evident, that all men are created equal.”

Graphic Organizer: The Declaration of Independence and Equality in U.S. History

Documents: The Declaration of Independence and Equality in U.S. History