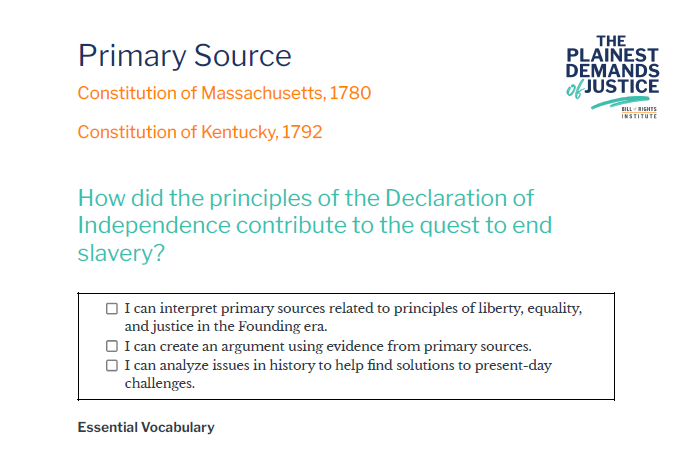 After declaring independence from Great Britain, the former colonies wrote new constitutions outlining the role of government, the rights of their citizens, and the way they would function as independent states. Some states addressed slavery directly, while others omitted it. In the following two constitutions, pay particular attention to the way each addresses equality and what implications that may have for slavery.

PART THE FIRST
A Declaration of the Rights of the Inhabitants of the Commonwealth of Massachusetts.

Article I. All men are born free and equal, and have certain natural, essential, and unalienable rights; among which may be reckoned the right of enjoying and defending their lives and liberties; that of acquiring, possessing, and protecting property; in fine, that of seeking and obtaining their safety and happiness.

That the general, great and essential principles of liberty and free government may be recognized and established, WE DECLARE

Article IX: The Legislature shall have no power to pass laws for the emancipation of slaves without the consent of their owners, or without paying their owners, previous to such emancipation, a full equivalent in money for the slaves so emancipated;…