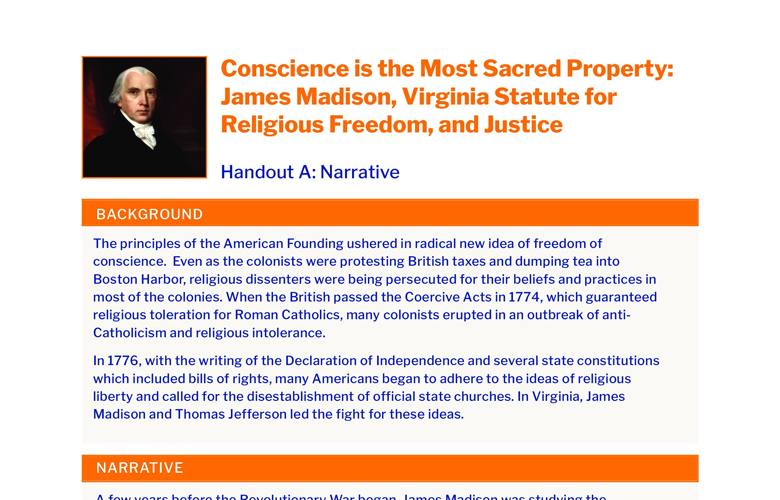 The principles of the American Founding ushered in radical new idea of freedom of conscience. Even as the colonists were protesting British taxes and dumping tea into Boston Harbor, religious dissenters were being persecuted for their beliefs and practices in most of the colonies. When the British passed the Coercive Acts in 1774, which guaranteed religious toleration for Roman Catholics, many colonists erupted in an outbreak of anti Catholicism and religious intolerance.

In 1776, with the writing of the Declaration of Independence and several state constitutions which included bills of rights, many Americans began to adhere to the ideas of religious liberty and called for the disestablishment of official state churches. In Virginia, James Madison and Thomas Jefferson led the fight for these ideas.

A few years before the Revolutionary War began, James Madison was studying the principles of civil and religious liberty at Princeton. Upon returning to his home in Virginia, he was shocked by the religious persecution he witnessed. Dissenting ministers were denied licenses to preach and were beaten if they still attempted to take the pulpit. They were jailed and suffered violence from angry mobs that lingered outside their cells. Baptists in particular faced backlash, and were nearly drowned in local rivers by their fellow citizens. Madison fumed about the violation of rights, stating, “[the] diabolical Hell-conceived principles of persecution rages among some…This vexes me the most of anything whatever. There are at this [time] in the adjacent County not less than 5 or 6 well-meaning men in [ jail] for publishing their religious Sentiments.” The young man resolved to fight for justice for his fellow citizens who were persecuted for their religious beliefs.

In early May, 1776, as the war raged to the North, Madison traveled by horseback to the capital of Williamsburg, where his fellow representatives assembled for the Fifth Virginia Convention. They would instruct the Virginia delegation to the Continental Congress meeting in Philadelphia to declare independence, and then draw up a framework of government for Virginia. The venerable George Mason drafted a declaration of rights that contained a dramatic expansion of religious toleration. It stated, “All men should enjoy the fullest Toleration in the Exercise of Religion.” The twenty-five-year-old Madison was dedicated to respect for religious beliefs and did not want mere “toleration.” He fought for religious liberty as an inalienable right and won his amendment that stated, “All men are equally entitled to the free exercise of religion.” It was a revolutionary idea in the history of the world.

Madison unleashed a groundswell of support for religious liberty as dissenters were inspired by his work and flooded the Assembly with petitions to disestablish the official Anglican Church. The Assembly responded with an uneasy bargain in which dissenters were relieved from paying taxes for the Anglican Church and from attending its services, but Anglicanism remained the established church. Madison thought this conflicted with liberty of conscience and resolved to carry on the struggle, though the Revolutionary War forced the debate to be temporarily tabled.

In 1784, the Revolutionary War had been won and independence secured, but many fretted over the decline in public virtue and private morality of the citizenry. Therefore, with broad popular support, the esteemed Patrick Henry introduced a general tax in Virginia that would be allocated to any denomination or school of a taxpayer’s choice to support knowledge and virtue. The Assembly received hundreds of petitions in favor of the measure. George Washington, John Marshall, Richard Henry Lee, and Edmund Pendleton were among the luminaries who supported the resolution, which passed by a margin of forty-seven to thirty-two in November. Henry was appointed to chair a committee to draft the bill.

Madison moved into action in defense of religious liberty. In the Assembly, Madison argued that the bill would violate the natural right to religious conscience and involve the state in questions that belonged only to the churches. He also supported Henry’s election to the governorship of Virginia in order to maneuver him out of the Assembly debates, where he shone with his unparalleled oratorical skills. Madison additionally rallied the dissenters, which included Baptists, Methodists, and Quakers to deluge the Assembly with petitions protesting the general assessment. Finally, Madison wrote an anonymous pamphlet entitled Memorial and Remonstrance against Religious Assessments.

In it, he wrote, “The religion then of every man must be left to the conviction and conscience of every man; and it is the right of every man to exercise it as these may dictate. This right is in its nature an unalienable right.” Madison also supported the idea of separation of church and state in order to prevent the government from interfering with religious beliefs and practices. “Religion is wholly exempt from the cognizance of [civil society],” he continued, as “civil society itself had no right to interfere with religion, certainly the legislature, its creature, had no such right.”

Madison’s diligence led the turning of the tide against the general tax and the wider issue of religious establishment. He introduced Thomas Jefferson’s “Bill for Establishing Religious Freedom” and led the fight for its passage in the Assembly when Jefferson was in Paris as a diplomat. On January 16, 1786, the Virginia Assembly passed the Virginia Statute for Religious Freedom, which disestablished the official church. The bill stated, “No man shall be compelled to frequent or support any religious worship, place, or ministry whatsoever, nor shall be enforced, restrained, molested, or burthened in his body or goods, nor shall otherwise be made to suffer, on account of his religious opinions or belief.” It also asserted the idea of freedom of conscience. “We are free to declare, and do declare, that the rights hereby asserted are of the natural rights of mankind.”

Madison continued to work for justice in religious liberty as a basic right when he introduced and helped secure passage of the Bill of Rights, which included the First Amendment’ s protection of religious liberty. Madison inspired other national figures such as George Washington to advocate for the natural right of freedom of conscience in the new nation.