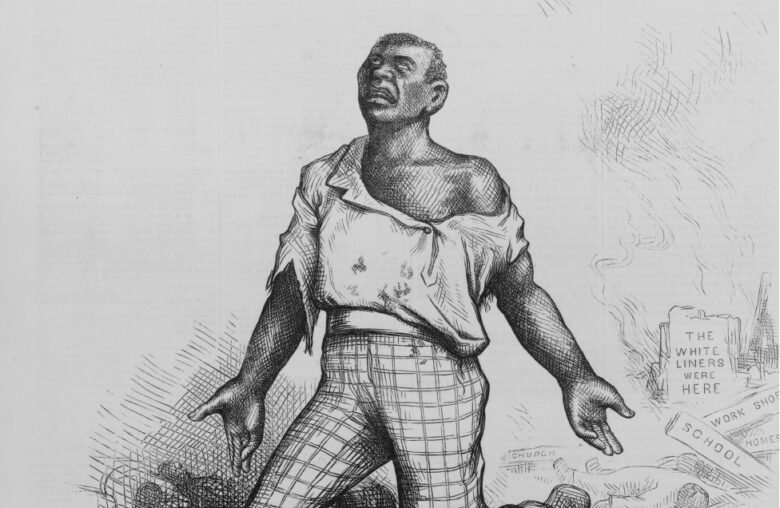 In 1863, President Abraham Lincoln declared a national Thanksgiving holiday. Six years later, in 1869, Thomas Nast’s “Uncle Sam’s Thanksgiving Dinner” appeared in the November 20 issue of Harper’s Weekly. Harper’s Weekly covered domestic and foreign news as well as fiction, essays, and illustrations. Thomas Nast was the magazine’s most famous and influential contributor; his work appeared in Harpers Weekly from the late 1850s to the mid-1880s. When Nast’s Thanksgiving cartoon was published in 1869, Congress had recently passed the Fifteenth Amendment, which granted men the right to vote regardless of “race, color, or previous condition of servitude,” and state legislatures were in the process of debating the ratification of the amendment.

In the first image, Uncle Sam, standing on the far right, carves a turkey. Columbia, seated on the far left, speaks to a Chinese man. Americans from all around the world sit at the table. On the wall hang portraits of three presidents: Lincoln, George Washington, and Ulysses S. Grant. Behind Uncle Sam is a painting of Castle Garden, the main immigration processing center in New York City before the opening of Ellis Island in 1892.

Despite the passage of the Reconstruction Amendments (i.e., the Thirteenth, Fourteenth, and Fifteenth Amendments), the idea of allowing African American men to vote and receive full civil rights met with local resistance in the South. The second featured image by Thomas Nast, “The Union As It Was,” also appeared in Harper’s Weekly, on October 10, 1874. A member of the White League and a Ku Klux Klan member shake hands over a shield depicting “The Lost Cause.”

“The Union As It Was” (image) https://en.wikipedia.org/wiki/Reconstruction_era#/media/File:The_Union_as_It_Was.jpg