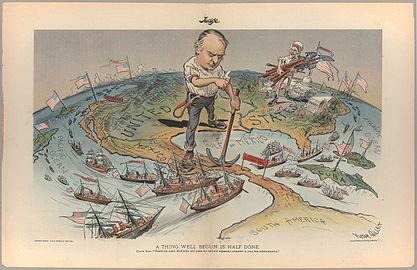 The following cartoon,A Lesson for Anti-Expansionists: Showing How Uncle Sam Had Been an Expansionist First, Last, and All the Time, was published in 1899 in the weekly satirical magazine Judge. Uncle Sam is depicted at varying stages of life from infancy to old age, with dated milestones of U.S. territorial expansion listed underneath each figure. Each milestone marker lists the number of states in the United States, and the final one notes that the United States has claimed valuable interests in Cuba, Philippines, and Puerto Rico. At the far right, the arms of various European countries reach out to take Uncle Sam’s hand, with the marker reading, “And now all the nations are anxious to be on friendly terms with Uncle Sam.”