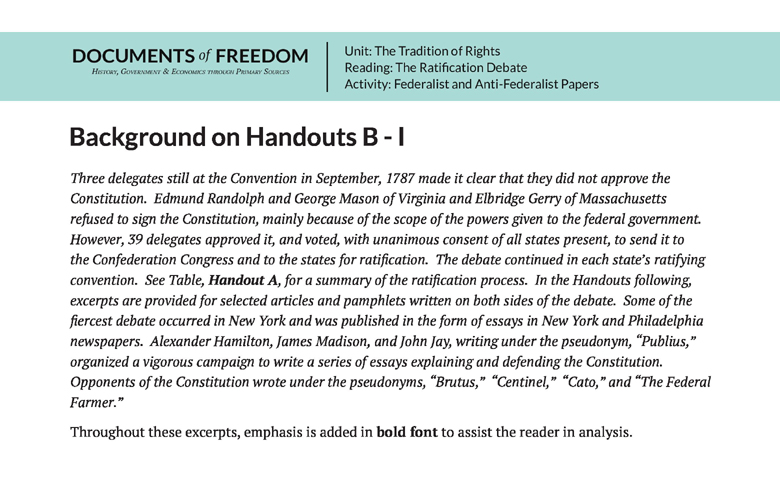 Background on Handouts B – I

Three delegates still at the Convention in September, 1787 made it clear that they did not approve the Constitution. Edmund Randolph and George Mason of Virginia and Elbridge Gerry of Massachusetts refused to sign the Constitution, mainly because of the scope of the powers given to the federal government. However, 39 delegates approved it, and voted, with unanimous consent of all states present, to send it to the Confederation Congress and to the states for ratification. The debate continued in each state’s ratifying convention. See Table, Handout A, for a summary of the ratification process. In the Handouts following, excerpts are provided for selected articles and pamphlets written on both sides of the debate. Some of the fiercest debate occurred in New York and was published in the form of essays in New York and Philadelphia newspapers. Alexander Hamilton, James Madison, and John Jay, writing under the pseudonym, “Publius,” organized a vigorous campaign to write a series of essays explaining and defending the Constitution. Opponents of the Constitution wrote under the pseudonyms, “Brutus,” “Centinel,” “Cato,” and “The Federal Farmer.”

Throughout these excerpts, emphasis is added in bold font to assist the reader in analysis.