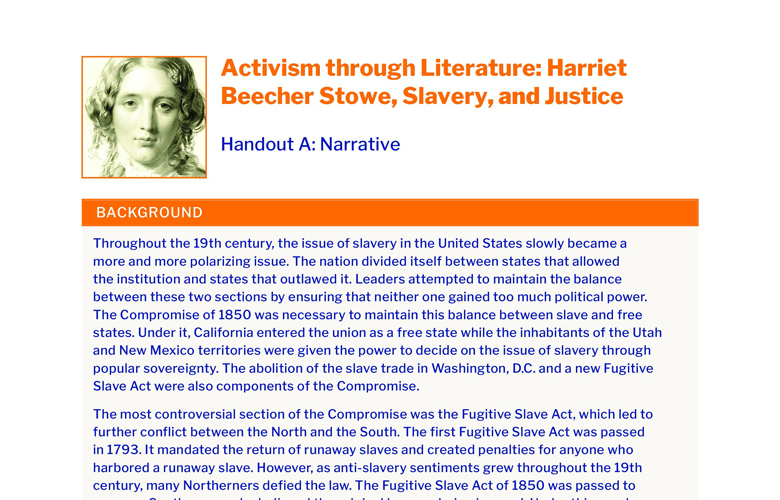 Throughout the 19th century, the issue of slavery in the United States slowly became a more and more polarizing issue. The nation divided itself between states that allowed the institution and states that outlawed it. Leaders attempted to maintain the balance between these two sections by ensuring that neither one gained too much political power. The Compromise of 1850 was necessary to maintain this balance between slave and free states. Under it, California entered the union as a free state while the inhabitants of the Utah and New Mexico territories were given the power to decide on the issue of slavery through popular sovereignty. The abolition of the slave trade in Washington, D.C. and a new Fugitive Slave Act were also components of the Compromise.

The most controversial section of the Compromise was the Fugitive Slave Act, which led to further conflict between the North and the South. The first Fugitive Slave Act was passed in 1793. It mandated the return of runaway slaves and created penalties for anyone who harbored a runaway slave. However, as anti-slavery sentiments grew throughout the 19th century, many Northerners defied the law. The Fugitive Slave Act of 1850 was passed to appease Southerners who believed the original law was being ignored. Under this new law, Northerners were expected to help slave catchers track down escapees. Citizens who hid slaves or refused to help in a slave hunt faced severe punishments. What was considered a southern institution suddenly had national implications as citizens in all parts of the country were expected to become active participants in slavery. The Fugitive Slave Act created a dilemma for many Northerners who had to decide whether to help a human being or obey the law.

Edmund Burke once said, “All that is necessary for the triumph of evil is that good men do nothing.” This idea was firmly established in the Bible, which was a vital part of Harriet Beecher Stowe’s upbringing. Her father, Lyman Beecher, was an evangelical Presbyterian minister in Litchfield, Connecticut. Harriet was raised in an environment which provided many educational opportunities for women and supported the exploration of literature. Lyman Beecher often hosted literary discussions in his home. Harriet pursued writing as an intellectual outlet that was acceptable for women during the time since it was considered a skill necessary for maintaining family ties. Writing was encouraged throughout her childhood. At the age of thirteen, her essay “Can the immortality of the Soul be proved by the light of nature?” was featured in a school publication. Her father and sister acknowledged her intellect and supported her continued education, which extended beyond sixteen years, the age which generally marked the end of female education.

In 1836, Harriet married Calvin Stowe, who continued to support her literary talent. Their life in Cincinnati, Ohio, provided Harriet with a first-hand experience of the conflict between free and slave states as the free state Ohio bordered the slave state Kentucky. However, it was the loss of her eighteen-month-old son to a cholera epidemic that compelled her to find new purpose in her life. Stowe related the loss of her son to what a slave woman endured when her child was ripped from her at a slave auction. The Fugitive Slave Act of 1850 was passed a year after her son’s death and acted as a catalyst for Stowe to become an advocate for the abolitionist movement.

Though Harriet Beecher Stowe was a white woman, her contact with enslaved people and fugitive slaves motivated her to apply her literary prowess towards convincing people that slavery was unjust. In 1850, Stowe wrote an article entitled “The Freeman’s Dream: A Parable” in which she argued the idea that people ought to assist escaped slaves. Stowe appealed to white northerners, writing, “Shall any doubt if he may help the toil-worn, escaping fugitive, sick in heart, weary in limb, hungry and heartsore—let him rather ask, shall he dare refuse him?”

Soon, Stowe was asked by her publisher to “paint a word picture of slavery.” The first segment of Uncle Tom’s Cabin appeared June 5, 1851 in the anti-slavery newspaper The National Era and continued for a total of 45 segments.

In 1852, the novel Uncle Tom’s Cabin became an overnight global bestseller. It created a powerful imagery that humanized slaves and provided an identity to a people that were denied one. Stowe’s realistic novel instilled empathy that undermined the former passive acceptance of the institution of slavery. Stowe assembled a number of her slave narratives into a compelling single story. Ultimately, Stowe’s belief in Christianity and the principles of a government based on the idea that “all men are created equal” pushed her to champion justice for a people who were denied these rights. She demanded action and urged people to assist escaped slaves and view them with compassion. An example of this sentiment can be seen in an excerpt taken from the final chapter of Uncle Tom’s Cabin:

On the shores of our free states are emerging the poor, shattered, broken remnants of families…men and women, escaped, by miraculous providences, from the surges of slavery…feeble in knowledge, and, in many cases, infirm in moral constitution, from a system which confounds and confuses every principle of Christianity and morality. They come to seek a refuge among you; they come to seek education, knowledge, Christianity. What do you owe to these poor, unfortunates, O Christians? Does not every American Christian owe to the African race some effort at reparation for the wrongs that the American nation has brought upon them?

After Uncle Tom’s Cabin was published, many pro-slavery critics questioned the accuracy of her novel. In response, Stowe wrote A Key to Uncle Tom’s Cabin in 1853, which documented the basis for the story and featured a more defiant and critical tone towards the South. Despite these critics, Uncle Tom’s Cabin was so influential that when Stowe met President Lincoln in 1862 he was said to have stated to her, “So you are the little woman who wrote the book that started this great war!”

Harriet Beecher Stowe expressed a deep desire for justice. She once stated, “I would write make this whole nation feel what an accursed thing slavery is.” What Stowe set out to accomplish would become a reality. As a follow-up to Uncle Tom’s Cabin, Stowe continued to promote justice by writing the novel Dred; A Tale of the Great Dismal Swamp in 1856, which focused on an escaped slave and a religious zealot.

Stowe devoted her work towards combatting slavery, despite the fact that the institution appeared to be entrenched in the South. She wrote to initiate justice, and her vision of a country which lived up to its ideals of “all men are created equal” is still present today.