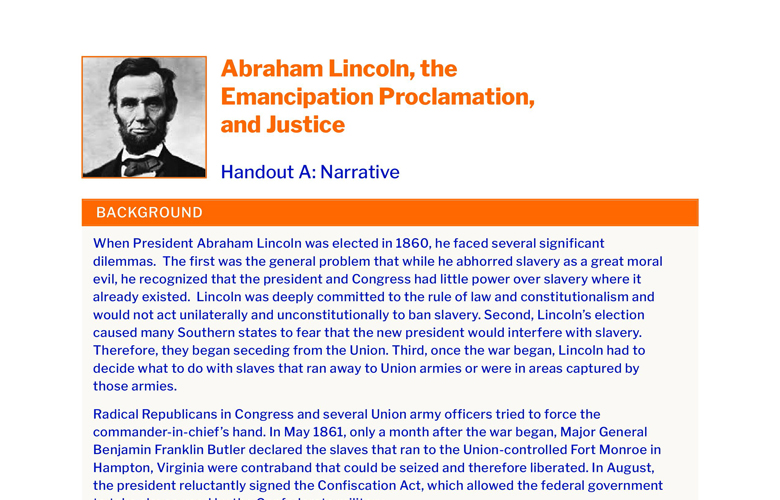 When President Abraham Lincoln was elected in 1860, he faced several significant dilemmas. The first was the general problem that while he abhorred slavery as a great moral evil, he recognized that the president and Congress had little power over slavery where it already existed. Lincoln was deeply committed to the rule of law and constitutionalism and would not act unilaterally and unconstitutionally to ban slavery. Second, Lincoln’s election caused many Southern states to fear that the new president would interfere with slavery. Therefore, they began seceding from the Union. Third, once the war began, Lincoln had to decide what to do with slaves that ran away to Union armies or were in areas captured by those armies.

Radical Republicans in Congress and several Union army officers tried to force the commander-in-chief’s hand. In May 1861, only a month after the war began, Major General Benjamin Franklin Butler declared the slaves that ran to the Union-controlled Fort Monroe in Hampton, Virginia were contraband that could be seized and therefore liberated. In August, the president reluctantly signed the Confiscation Act, which allowed the federal government to take slaves used by the Confederate military.

That same month, Major General John Charles Frémont, head of the Department of the West, declared martial law in Missouri with a proclamation freeing the slaves. Lincoln asked him to modify it, and when Frémont was defiant, the president ordered it. The Radical Republicans passed the Second Confiscation Act, allowing slaves to be seized without a jury trial. Like the first Confiscation Act, the army largely ignored it. Finally, in April 1862, Major General David Hunter declared martial law on the Carolina, Georgia, and Florida coasts, freeing and arming the slaves there. Lincoln furiously rescinded the order and informed all commanders they had no authority to free or arm slaves.

Lincoln even offered compensated emancipation to Border States such as Delaware and had to be careful to avoid any misstep that might make strategically-important Maryland, Kentucky, or Missouri join the Confederacy. Contrary to his contemporary critics, President Lincoln did not ignore the plight of four million slaves. He was acting prudently and sought to achieve the moral victory of ending slavery through constitutional means. Lincoln knew that a presidential proclamation and any of the efforts by his officers would be subject to the scrutiny of the Supreme Court. A constitutional amendment would be necessary to end slavery forever in the United States. In the meantime, any proclamation would have to be crafted with the greatest care to be constitutional, which was why Lincoln vetoed his officers’ attempts to free slaves.

On the morning of July 13, 1862, President Abraham Lincoln rode in a carriage with his Secretary of State William Seward and Secretary of the Navy Gideon Welles to the funeral of Secretary of War Edwin Stanton’s infant son. During the bumpy ride over the rutted streets of Georgetown Heights, Lincoln undoubtedly dwelled morosely on the recent death of his own eleven-year-old son, Willie, as well as the frustrations of Union military defeats. However, Lincoln was ready to confide in the members of his Cabinet and took the opportunity to reveal a plan to free the slaves. Lincoln told Seward and Welles that he had “dwelt earnestly on the gravity, importance, and delicacy” of the subject. The president had concluded that freeing the slaves was a “military necessity absolutely essential for the salvation of the Union.” He intimated that he would use presidential war powers to emancipate the slaves by “proclamation in case the Rebels did not cease to persist in their war.” Seward and Welles were dumbfounded, and Seward interrupted that it was an issue with “vast and momentous” consequences and needed “mature reflection.” Welles was uncomfortable discussing the subject while traveling to a funeral. However, Lincoln persisted in talking about emancipation which was the “absorbing theme” of the ride. They would soon continue the conversation with the rest of the Cabinet.

Over the next week, Lincoln spent time alone in deep concentration in his library and drafted a preliminary Emancipation Proclamation. It might have seemed like an impossible task fraught with insurmountable difficulties. He had to consider many questions and audiences. First of all, Lincoln had a deep reverence for the Constitution and laws of the United States and wanted to make sure that he was acting constitutionally rather than just acting on his own personal wishes. Secondly, he had to anticipate opposition to the measure—for very different reasons— from different audiences including the South, Border States in the North that had slaves, and northern Democrats, Radical Republicans, soldiers, and ordinary citizens.

On Tuesday morning, July 22, Lincoln met with most of his Cabinet members in his office and shared his preliminary Emancipation Proclamation with them. He indicated that he welcomed their suggestions and even invited them to express their differences, but stated that he “had resolved upon this step, and had not called them together to ask their advice” over whether he should issue the proclamation. He told them that he assumed full responsibility for the measure. Everyone was thunderstruck, and no one said a word. Lincoln let the silence hang in the air for several long minutes and proceeded to read his draft to them.

Lincoln’s preliminary Emancipation Proclamation declared that under his constitutional war powers as commander-in-chief, he was “forever” freeing the slaves as a war measure to damage the Confederate war effort. The proclamation only applied to the states who were part of the Confederacy, and any state which renounced secession and returned to the Union by January 1, 1863 could keep their slaves. Moreover, the proclamation did not apply to the Border States of Maryland, Delaware, Kentucky, and Missouri because the Constitution gave him no authority over their slaves and they would join the Confederacy if he tried to free them.

Lincoln received a wide variety of opinions from his Cabinet—that it would lead to a race war, that it would have disastrous political fallout for the Republicans in the upcoming congressional elections and 1864 presidential election, that it would invite foreign intervention on the side of the Confederacy to protect cotton supplies, and that it would cause southerners to fight even harder to preserve their way of life and thereby lengthen the war. President Lincoln was not dissuaded in his pursuit of justice, but the one piece of advice that he listened to was Stanton’s counsel to wait “until the eagle of victory takes his flight.” Lincoln concurred and stated that he would issue the proclamation only after a significant Union victory.

Meanwhile, Lincoln started to drop some subtle hints of his upcoming proclamation. In a public letter to President Lincoln entitled “The Prayer of Twenty Millions,” New York Tribune editor Horace Greeley urged Lincoln to adopt an abolitionist stance and free the slaves. Lincoln replied and stated, “My paramount object in this struggle is to save the Union.” Although he would pursue that goal by freeing none or just some of the slaves, Lincoln held it out as a possibility that he would save the Union by “freeing all the slaves.” Although some interpret this letter to mean Lincoln made ending slavery secondary to the primary goal of preserving the Union, he tied the constitutional and moral causes of justice together. Lincoln also told a group of clergymen that he felt like an instrument of God’s will and hinted at a “proclamation of liberty to the slaves.”

Meanwhile, the Union continued to lose on the battlefield. Finally, on September 17, Union General George McClellan defeated General Robert E. Lee at the Battle of Antietam, which still stands as the bloodiest day in American history. Lee withdrew from Maryland back into Virginia, and while McClellan failed again to pursue the enemy, Lincoln had the victory he needed to issue the preliminary Emancipation Proclamation, which he did on Monday, September 22. He convened the Cabinet that day and told them, “When the rebel army was at Frederick, I determined, as soon as it should be driven out of Maryland, to issue a Proclamation of Emancipation. I said nothing to any one; but I made the promise to myself, and to my Maker. The rebel army is driven out, and I am going to fulfil that promise.” He continued, “God had decided this question in favor of the slaves. He was satisfied it was right.” Lincoln read the four pages of the proclamation to his Cabinet, who quietly supported the measure, and it was published in the Washington papers the next day.

Lincoln had a long record of opposing the moral evil of slavery while supporting a constitutional republic. While he had little power over slavery where it existed, Lincoln determined that his war powers permitted him to interfere with it in the rebellious states. Once he decided that it was the constitutionally and morally right thing to do, he freed the slaves and persevered in his course. In November 1862, he said he would “rather die than take back a word of the Proclamation of Freedom.” On January 1, 1863, none of the Confederate states returned to the Union, and the slaves there were considered free under Lincoln’s statement. The Emancipation Proclamation was one of the country’s greatest political gambles and one of its greatest acts of justice. At the end of the war, the Thirteenth Amendment, which forever banned slavery in the United States, was ratified.