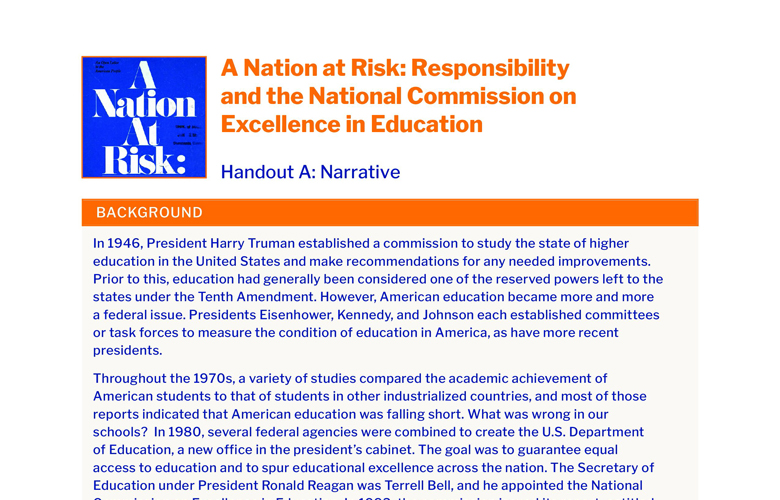 In 1946, President Harry Truman established a commission to study the state of higher education in the United States and make recommendations for any needed improvements. Prior to this, education had generally been considered one of the reserved powers left to the states under the Tenth Amendment. However, American education became more and more a federal issue. Presidents Eisenhower, Kennedy, and Johnson each established committees or task forces to measure the condition of education in America, as have more recent presidents.

Throughout the 1970s, a variety of studies compared the academic achievement of American students to that of students in other industrialized countries, and most of those reports indicated that American education was falling short. What was wrong in our schools? In 1980, several federal agencies were combined to create the U.S. Department of Education, a new office in the president’s cabinet. The goal was to guarantee equal access to education and to spur educational excellence across the nation. The Secretary of Education under President Ronald Reagan was Terrell Bell, and he appointed the National Commission on Excellence in Education. In 1983, the commission issued its report, entitled “A Nation at Risk.”

Our nation is at risk. Our once unchallenged preeminence in commerce, industry, science, and technological innovation is being overtaken by competitors throughout the world. This report is concerned with only one of the many causes and dimensions of the problem, but it is the one that undergirds American prosperity, security, and civility. We report to the American people that while we can take justifiable pride in what our schools and colleges have historically accomplished and contributed to the United States and the well-being of its people, the educational foundations of our society are presently being eroded by a rising tide of mediocrity that threatens our very future as a nation and a people… If an unfriendly foreign power had attempted to impose on America the mediocre educational performance that exists today, we might well have viewed it as an act of war. As it stands, we have allowed this to happen to ourselves…Our society and its educational institutions seem to have lost sight of the basic purposes of schooling, and of the high expectations and disciplined effort needed to attain them. This report, the result of 18 months of study, seeks to generate reform of our educational system in fundamental ways and to renew the Nation’s commitment to schools and colleges of high quality throughout the length and breadth of our land.

The report went on to recommend that all high schools require four years of English, three years each of math, science, and social studies, a semester of computer science and development of competency in a foreign language. Academic standards and expectations were to be heightened, school days lengthened, and expertise of teachers strengthened. The report also stressed a continuing role for the federal government in providing leadership and funding to meet the needs of certain key groups, such as the socioeconomically disadvantaged, minorities, and students who were handicapped.

The commission was made up of twelve administrators, two scientists, a businessperson, a politician, a conservative activist, and one teacher. The group met a total of eight times across a period of 18 months. They gathered information through about a dozen public hearings. These included testimonies from nearly 250 experts as well as commissioning studies from educational experts who submitted 60 research reports.

The report received a great deal of publicity; most of it focused on the bad news that America’s education system did not measure up in comparison to those of other modern countries. Later studies that received less publicity indicated that the academic achievement of American students may not have been as bleak as had been indicated. For example, while “A Nation at Risk” pointed to an overall decline in average SAT scores, a closer look showed modest but steady improvement in results for most sub-groups. One explanation for the apparent overall decline was that more students from groups who previously would not have been able to consider college were taking the exam. In other words, SAT scores no longer reflected only the results of the most academically inclined students.

Featured on all forms of national media, “A Nation at Risk” generated a great deal of discussion, leading to various comprehensive education reform initiatives at all levels. The report identified problems but did not identify fundamental causes for those problems. The debate continued regarding how best to improve America’s schools. In 1989, President George H. Bush joined Arkansas Governor Bill Clinton to host the first National Education Summit in Charlottesville, Virginia. This meeting was aimed at bringing the nation’s fifty governors together to establish educational goals for the nation. This effort resulted in six (later eight) goals to be reached by 2000. In 1992, the first charter school, a privately operated public school, opened in Minnesota. Many foundations across the country contributed funds to underwrite both research and implementation of new ideas.

In 1994, President Clinton signed the Goals 2000: Educate America Act, which provided federal funding to the states to develop and implement standards for what every child should know and be able to do. The charter school movement made additional strides that year when the first Knowledge is Power Program (KIPP) schools opened in Houston and New York. In 1997, Education Week produced a state-by-state analysis, “Quality Counts: A Report Card on the Condition of Public Education,” which concluded, “despite 15 years of earnest efforts to improve public schools and raise student achievement, states haven’t made much progress.” In 2002, President George H.W. Bush signed the No Child Left Behind Act, calling for greater accountability of students, teachers, and schools. By that time, virtually every state had developed and adopted its own learning standards.

An effort to adopt national standards was funded by the Gates Foundation, resulting in the launch in 2009 of the Common Core State Standards initiative. Governors and state commissioners of education from across the country hoped to develop “consistent, real-world learning goals” so that all students, regardless of where they lived, would be prepared for college, career, and civic life. The Common Core movement continued in 2015, reflecting a process similar to that which defined previous education reform movements. Vigorous, often contentious, debate continues regarding how best to achieve high academic standards. What level—family, local, state, or national—is best equipped to be responsible for decisions regarding the education of young people?

Though “A Nation at Risk,” was written almost 40 years ago, its words still ring true:

“Knowledge, learning, information, and skilled intelligence are the new raw materials of international commerce and are today spreading throughout the world… we must dedicate ourselves to the reform of our educational system for the benefit of all… Learning is the indispensable investment required for success in the “information age” we are entering… [America has made the promise] that all children by virtue of their own efforts, competently guided, can hope to attain the mature and informed judgment needed to secure gainful employment and to manage their own lives, thereby serving not only their own interests but also the progress of society itself.”