Why You Should Visit a Courthouse 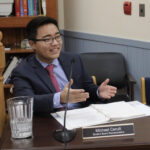 The great philosopher Montesquieu once warned that “all would be lost” if not for the separation of the powers of “making the laws…of executing public resolutions, and of judging the crimes or the disputes of individuals”.

Take a walk into any middle school civics class and this tenet of democracy is clear. The students will be quick to tell you that here, in the United States, we divide our own governmental powers between the executive, the legislature, and the judiciary. Ask them who the president is, and even the most passive of youngsters could produce the name of our current media mogul turned Commander in Chief. Ask them about Congress, and they’ll probably be able to tell you about the senators and congressmen who command multimillion person followings on social media. They might even be able to name their local representative.

When it comes to the latter of the three branches, however, the preteens might have some trouble. Indeed, most Americans-adults included-have trouble naming both the members and the powers of our nation’s highest court. One recent study found that one in ten college graduates believe that Judith Sheindlin of “Judge Judy” fame sits on Supreme Court. Now, before we intellectually minded readers begin to hold ourselves to some higher standard for knowing that Judge Judy does not, in fact, work alongside Clarence Thomas and Elena Kagan; we must ask ourselves just how aware we are of our own judicial system. What circuit does your home state fall in? Who decides which of your state’s federal-level disputes get heard before the nation’s Supreme Court?

It is questions like these that we tend to ask ourselves only when the bright lights of the media and President Trump’s reality TV White House are turned towards the judiciary. The chaos surrounding Justice Kavanaugh’s nomination illuminated many issues. Sexism, white privilege, the rights of the accused, and the #metoo movement were all hotly debated.

But one thing few took the time to ask is: why? Why do we care so much about the Court and the nomination process today? What was once a procedural vote has now turned into political battle royal. Perhaps it’s because today’s Congress is so ineffective. The inability to efficiently legislate on hot button topics leaves the ball in court of well…the Court. Abortion rights, gun control, healthcare, and a whole host of hot button issues all fall squarely in the purview of the Court. The vitriol surrounding each new nominee is further compounded a sense of exigence concerning the generational influence that a Supreme Court Justice can exert.

It is times like these when all Americans must remember that this design is intentional. “Ambition”, James Madison wrote, “must be made to counteract ambition”. The Court stands as an institutional check on the power of the legislature and the executive, and the latter two (should) function as a balance to the Court.

It is for this reason that Americans must remain in touch with the business of their Article III Branch. Visit your local courthouse (all are open to the public), listen to Supreme Court oral arguments (available on YouTube), or read a controversial opinion. Watch how each side must lay out their argument logically, supported by facts. Listen to the judges ask measured, deliberate questions. Read how evidence and precedent are cited in each brief and opinion. I promise it will be a welcome relief from the  quixotic grandstanding common in the Article I and II branches. Take the time to get to know your republic. All of it.

Even with the recent controversies, the courts should serve as an example for citizenship. More than any other branch of government, the courts have been the most impervious to the polarized political tendencies of Washington. Chief Justice John Roberts has been a firm defender of this notion. On the highest court, the justices agree more often than they disagree. When they do differ, they do so with respect and collegiality. Reality television has yet to permeate the walls of the Supreme Court (contrary to the aforementioned study). Today, however, we hang perilously close to losing our third branch of government to the paralyzing gridlock that has infected the rest of Washington. If we do not revitalize our sense of civic awareness we might find the final branch of Mr. Madison’s creation falling victim to the very same divisiveness that continues to infect other facets of American government.

Michael Cerulli is a senior at Trumbull High School in Trumbull, Connecticut. He currently serves as the Student Representative to the Trumbull Board of Education, and is very engaged on issues related to youth voter outreach, foreign affairs, and national security. He is also a reporter for the Trumbull Times, and his work has been featured in the Connecticut Post. In his free time, Michael enjoys golfing, playing guitar, and flying airplanes.