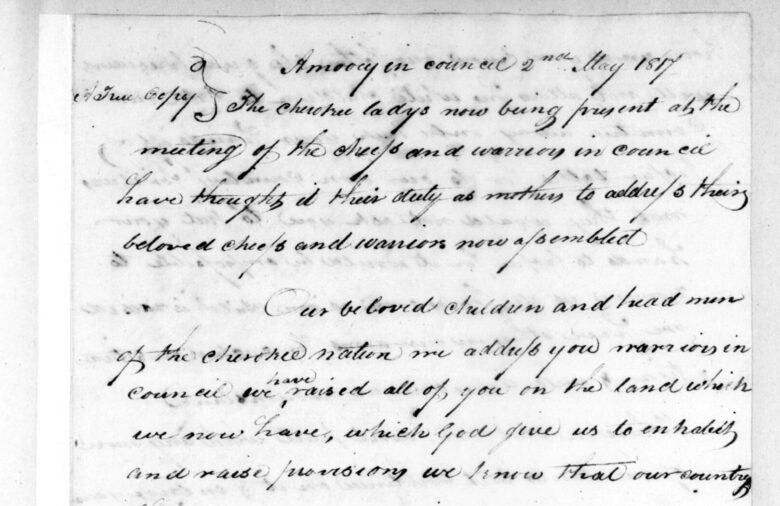 Our beloved children and head men of the Cherokee nation we address you warriors in council we have raised all of you on the land which we now have, which God gave us to inhabit and raise provisions we know that our country has once been extensive but by repeated sales has become circumscribed to a small tract and never thought it our duty to interfere in the disposition of it till now, if a father or mother was to sell all their lands which they had to depend on which their children had to raise their living on which would be indeed bad and to be removed to another country we do not wish to go to an unknown country which we have understood some of our children wish to go over the Mississippi but this act of our children would be like destroying your mothers. You mothers your sisters ask and beg of you not to part with any more of our lands, we say ours you are descendants and take pity on our request, but keep it for our growing children for it was the good will of our creator to place here and you know our father the great president will not allow his white children to take our country away only keep your hands off of paper talks for it is our own country for if it was not they would not ask you to put your hands to paper for it would be impossible to remove us all for as soon as one child is raised we have others in our arms for such is our situation and will consider our circumstance.

Therefore children don’t part with any more of our lands but continue on it and enlarge your farms and cultivate and raise corn and cotton and we your mothers and sisters will make clothing for you which our father the president has recommended to us all we don’t charge anybody for selling our lands, but we have heard such intentions of our children but your talks become true at last and it was our desire to forewarn you all not to part with our lands.

Nancy Ward to her children Warriors to take pity and listen to the talks of your sisters, although I am very old yet cannot but pity the situation in which you will hear of their minds. I have great many grand children which I wish they to do well on our land

Cherokee women held such great power in tribal councils that some white historians described the Cherokees as having a “petticoat government.” But colonization, removal, and federal Indian policies eroded women’s power substantially during the nineteenth century. According to Marilou Awiakta, Cherokee poet and historian, one of the central social roles of Cherokee women had been to provide wise council. The respected place of women—symbols of the life force and source of connection and balance—is indicated by the title “Beloved,” used to refer to revered women, who were charged with being advocates of peace. Nanyehi (Nancy Ward), one of the Cherokee Nation’s most revered leaders, achieved her status as War Woman through valor in battle, but upon becoming Beloved Woman she fought for peace, even when it meant warning white squatters of pending Cherokee attacks.

Awiakta tells of the meeting in 1765 between Henry Timberlake and Attakullakulla, a Cherokee chief, who had met to negotiate a treaty. Attakullakulla’s initial question to the delegation of whites—“Where are your women?”—was incomprehensible to them, since the lack of women in their delegation seemed irrelevant; to the Cherokee the absence of women indicated the whites’ lack of respect and their lack of a centering force. Timberlake’s memoirs note with amazement that the chief had brought women in his delegation, “as famous in war as powerful in the council” (Awiakta 471). It was from their long tradition of being heard and respected as clan mothers that the Cherokee women in 1817 petitioned their husbands, sons, and fathers to resist the colonization and expansionism of American settlers and their government. The United States began pressuring the Cherokees to sell their lands, which had once included parts of seven Southern states, soon after the Hopewell Treaty Council of 1785. Forced removal of the Cherokee Nation began with the 1830 Removal Act and culminated in the decimation of the Cherokee people in the Trail of Tears, during which some estimate that half of the population died.

In their petition (now part of the Andrew Jackson papers in the Library of Congress), the Cherokee women invoke the authority of their place as clan mothers to argue that no more of their lands be sold. They remind their audience that the people are inextricably connected to the land and that land is a vital spiritual source of their identity. While making appeals based on long-held cultural traditions, reminding their audience of fundamental values that should be upheld, they employ the formal rhetorical tradition of the dominant culture.