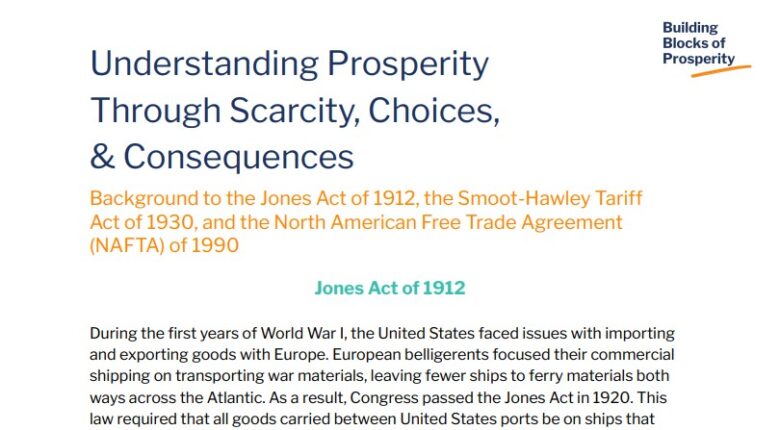 During the first years of World War I, the United States faced issues with importing and exporting goods with Europe. European belligerents focused their commercial shipping on transporting war materials, leaving fewer ships to ferry materials both ways across the Atlantic. As a result, Congress passed the Jones Act in 1920. This law required that all goods carried between United States ports be on ships that were constructed in the U.S., fly the American flag, and be owned and crewed by U.S. citizens or U.S. permanent residents.

Congress passed the law in an attempt to create a thriving U.S.-owned commercial fleet—something the nation lacked during World War I. The government believed this lack posed a national security concern should another major war break out. While the U.S. owned shipping industry grew substantially after the passage of the Jones Act—which is still in effect today—critics have argued that it is a protectionist law, or a law that is designed to shield or protect the United States’ domestic industries from foreign competition, that has driven the cost of goods up since foreign ships are not able to compete with U.S. ships in order to lower prices. How do you think our country should balance national security with economic prosperity?

The Smoot-Hawley Act of 1930 raised tariffs, or taxes on imported or exported goods, on over 20,000 imported goods to protect American businesses and farmers. It began as a bill to raise tariffs on agriculture, to help the U.S. farm industry that had struggled throughout the 1920s. Protectionism, or the desire to shield or protect domestic industries from foreign competition, gained strength after the stock market crash of 1929. By the time the bill passed, it had expanded and placed tariffs not only on agricultural imports, but manufactured and industrial imports as well. The Smoot-Hawley Act increased tariffs on foreign imports to the U.S. by about 20%, making it the second highest tariff in U.S. history. The Act was passed despite the protests of economists and politicians. Foreign governments retaliated against the U.S. by setting tariffs of their own. Increasing tariffs froze global trade and weakened the already struggling world economy. Both U.S. imports and exports declined dramatically and crippled industries.

The high tariffs created by the Smoot-Hawley Act proved to be a disaster. The decline in international trade and rising prices increased the suffering of people living through the Great Depression. Despite this failure, many still believe that tariffs can be beneficial. When might a tariff benefit a country?

NAFTA also affected jobs. Certain industries moved their production to Mexico because it was cheaper to produce their goods there. As a result, some U.S. workers lost their jobs, particularly in manufacturing industries. In addition, the threat of moving business to Mexico also decreased the ability of U.S. workers to demand higher wages in some cases. However, NAFTA also directly supported the creation of new jobs, and the increased trade among the three countries also supported additional jobs. The creation of and the effects of NAFTA are still debated today. Do you think trading agreements like NAFTA are a good idea? Why or why not?