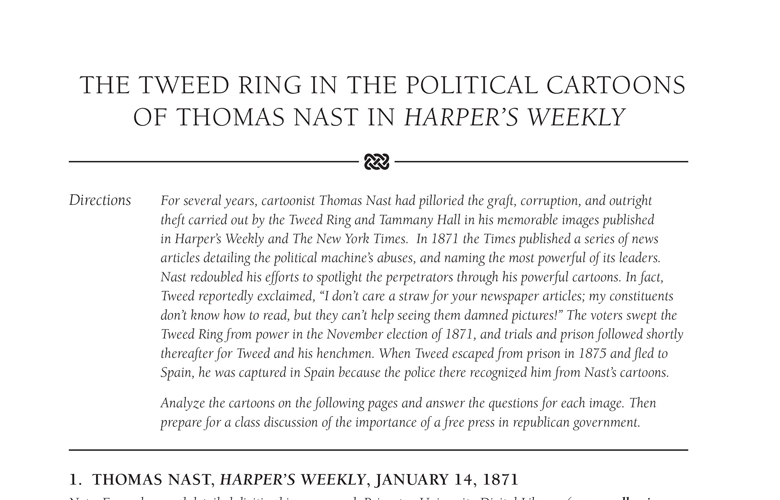 Directions: For several years, cartoonist Thomas Nast had pilloried the graft, corruption, and outright theft carried out by the Tweed Ring and Tammany Hall in his memorable images published in Harper’s Weekly and The New York Times. In 1871 the Times published a series of news articles detailing the political machine’s abuses, and naming the most powerful of its leaders. Nast redoubled his efforts to spotlight the perpetrators through his powerful cartoons. In fact, Tweed reportedly exclaimed, “I don’t care a straw for your newspaper articles; my constituents don’t know how to read, but they can’t help seeing them damned pictures!” The voters swept the Tweed Ring from power in the November election of 1871, and trials and prison followed shortly thereafter for Tweed and his henchmen. When Tweed escaped from prison in 1875 and fled to Spain, he was captured in Spain because the police there recognized him from Nast’s cartoons.

Analyze the cartoons on the following pages and answer the questions for each image. Then prepare for a class discussion of the importance of a free press in republican government. 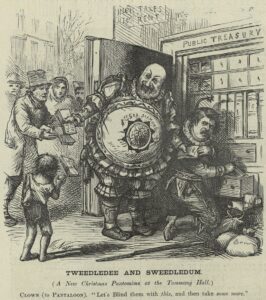 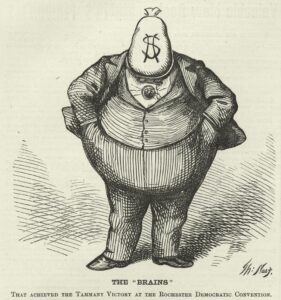 As is the case in most of his work, Nast uses rich symbolism in this image. Tweed himself had selected the snarling tiger as the symbol for the firemen’s company that he established, but Nast used Tweed’s own symbol against him. The tiger is shown mauling the female figure, Republic, whose helmet (the ballot) and sword representing power, lie broken nearby. The banner of Law and the American flag are tattered beneath her. The other female figure represents Justice, with her broken scales and sword at her side. The male figure represents Mercury, Roman god of commerce, with his winged helmet smashed at his left side. The arena is filled with a large audience taking in the spectacle, and the Tweed Ring’s members look on with determined attention. 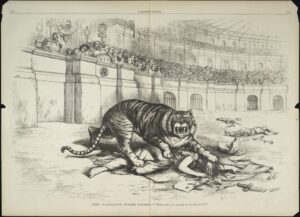 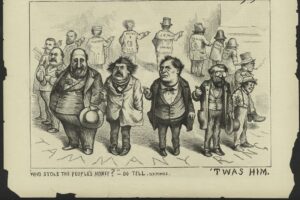