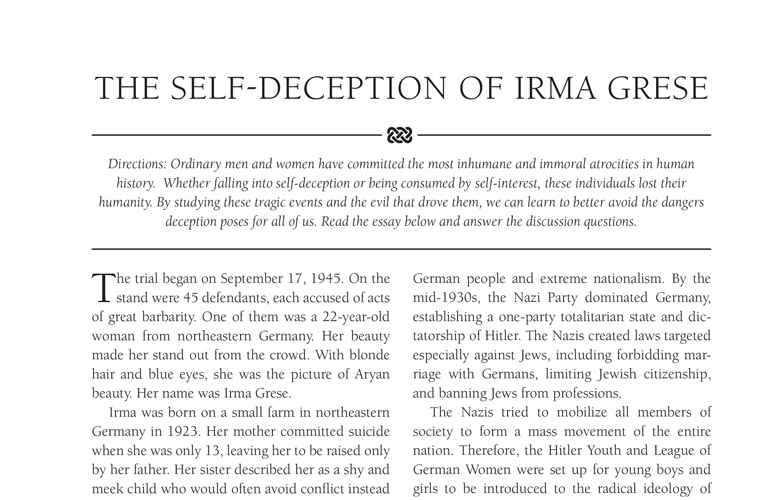 Ordinary men and women have committed the most inhumane and immoral atrocities in human history. Whether falling into self-deception or being consumed by self-interest, these individuals lost their humanity. By studying these tragic events and the evil that drove them, we can learn to better avoid the dangers deception poses for all of us. Read the essay below and answer the discussion questions.

The trial began on September 17, 1945. On thest and were 45 defendants, each accused of acts of great barbarity. One of them was a 22-year-old woman from northeastern Germany. Her beauty made her stand out from the crowd. With blonde hair and blue eyes, she was the picture of Aryan beauty. Her name was Irma Grese.

Irma was born on a small farm in north eastern Germany in 1923. Her mother committed suicide when she was only 13, leaving her to be raised only by her father. Her sister described her as a shy and meek child who would often avoid conflict instead of starting it. She left school when she was 14, as she was frustrated and bored of her schooling. After dropping out of school, Irma worked several odd jobs until she eventually began working at a local hospital, where she received training to be a nurse.

During the 1930s in Germany, a political movement called the National Socialist Germany Workers Party, or Nazis, seized power under the leadership of its charismatic, demagogic leader, Adolf Hitler, and the strong-arm tactics of its paramilitary troops, the SA brown shirts. The Nazis gained power and increasing popularity with a promise to overcome the economic calamity of the Great Depression, and an appeal to an ideology of racial superiority of the German people and extreme nationalism. By the mid-1930s, the Nazi Party dominated Germany,establishing a one-party totalitarian state and dictatorship of Hitler. The Nazis created laws targete despecially against Jews, including forbidding marriage with Germans, limiting Jewish citizenship,and banning Jews from professions.

The Nazis tried to mobilize all members of society to form a mass movement of the entirenation. Therefore, the Hitler Youth and League of German Women were set up for young boys and girls to be introduced to the radical ideology of the Nazi Party. These organizations encouraged a fervent faith in the Nazi ideology and to report anyone who disagreed, including family members if necessary. Irma joined the League of German Women and received indoctrination at a young age.She became a fervent advocate of the Nazi ideology.While working at the hospital and attending Nazi rallies, Irma also began to meet Nazi party officials. In addition to her personal activities, Irma was surrounded by war propaganda, calling upon German youth to aide the Nazi cause in what ever way they could. Herd education to Nazii deals was rewarded by the regime. By 1942 she had joined the S.S.Auxiliaries and been posted to Ravens bruck concentration camp for training to become a prison guard

Irma, like all other Nazi camp guards, under went several weeks of training which further brain washed recruits by reinforcing the party ideology and taught the women how to control prisoners. The training also dehumanized the Jews by referring to themas “sub-human” and comparing them to parasites.Irma took to the training with avidity. The warped ideology of Nazism gave her what she thought was a purpose. This combined with her training would drive her to unspeakable acts of violence.

Irma served in several concentrations camps from 1943 to 1945, including the notorious campat Auschwitz. She saw the prisoners she was charged with as less than human and treated them with disdain. She became more and more sadistic with her prisoners. She was known to carry a whip and a pistol on her at all times; both tools she used to inflict pain and suffering upon those under her watch. She was also known to engage in the psychological torture of prisoners. She would of ten make them stand at roll call for hours, no matter the weather, to test their resolve. Irma was also tasked with selecting “unfit” prisoners to be sent to their deaths in the gas chambers. Many prisoners would do all they could to disguise their true health during these inspections. Irma was known personally to poke and prod prisoners to test their true health.The shy farm girl had turned herself into a tool for the racial ideology professed by the Nazis, which created a sadistic tormentor who participated in the Holocaust, or extermination of the Jews

In April of 1945, the elements of the British and Canadian armies captured Irma when they liberated the concentration camp of Bergen-Belsen where she was posted. In September of 1945 she went on trial for the atrocities that she and others committed at the concentration camps of Auschwitz and Bergen Belsen. She denied the severity of the charges that were brought up against her during the trial and never sincerely apologized for them

Irma Grese was executed on December 13, 1945. She was only twenty-two, but had committed unspeakable crimes. She was deluded by an extreme racial ideology of hatred. Instead of a normal, happy childhood, she had deceived herself and enthusiastically participated in genocide and one of the greatest crimes against humanity in world history . When she was executed, she was the age of most college seniors today.

Deception To lie to yourself and others either to deceive purposefully or because you are deluded into thinking that something is right when it is wrong and unjust.

The Self-Deception of Irma Grese Essay

Virtue in Action – The Self-Deception of Irma Grese